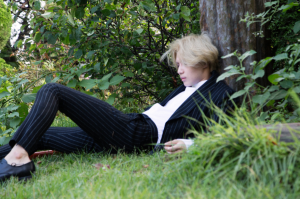 Much has been said about the meteoric growth of SHINee’s Taemin before news of his solo debut came out last month. Over the course of his six-year career, the maknae has evolved from a main dancer with minimal vocal skill to a bonafide triple threat in dancing, singing, and performing.

By the time of SHINee’s comeback in 2012 with “Sherlock,” it became near inevitable that a Taemin solo venture would happen somewhere down the line. The fact that he frequently expressed interest in doing so also didn’t hurt that prediction. At last, the time has come.

Despite previously griping about SM’s misfortune over the course of this year, I’ve actually been looking to Taemin’s solo debut as the company’s last great hope to get one tick mark in the “win” column for 2014. Henry may have been the first SM male solo act, but Taemin is likely one of a select few of the company’s ideal candidates for this type of opportunity.

Plus, once you consider that he comes from a group with a high standard of performance quality since debut and has proven himself as a capable singer and more-than-capable dancer, everything about this venture makes sense (even if there are other SHINee members you’d prefer to hear from first).

The first thing that struck me about the MV was the reliance on visuals above everything else, even the dancing and vocals. There’s an interesting mashup of cyberpunk, gothic, and glam rock styling, some of which are a natural fit for Taemin and some which miss the mark and leave you a little confused. Motorcycles? Gun-shaped guitars? Nose chain piercings? Is this what Taemin does in the basement of SM Entertainment when everyone leaves for the night? But I digress…

The stylistic choices with “Danger” succeed in shocking the viewer in how dark and rebellious they are, but they don’t come completely out of left field. 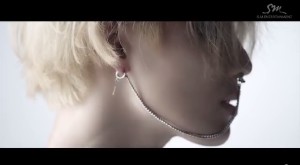 The MV’s visuals create an image that diverges from what we know of Taemin of SHINee while still offering a sense of continuity. Some of the styling really worked for me, especially the black hat, mesh top, white pants combo. Nonetheless, I do think “Danger’s” visuals are a bit too heavy-handed for this video.

Why? Because I wanted to see Taemin dance! Fortunately there are a few phenomenal sequences where the video highlights the choreography. My mind immediately recalls the black-and-white dancing scene during the bridge where it’s only Taemin, the vocal track, and tension-building drum beats accompanied by sound effects. That sequence was done incredibly well, easily my favorite part, but everywhere else there’s very little showcase for the dance moves. 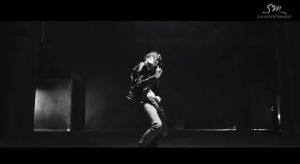 I believe this is a consequence of the visuals overpowering everything else as well as the choreography feeling a touch underwhelming. The video makes choreographer Ian Eastwood’s dance feel very stationary with few moments of distinguishable footwork, which the live performances have partially confirmed.

Something just feels missing from the choreography, and I was looking forward to seeing Taemin perform something more complex and impressive. I would have also liked to see fewer, more charismatic backup dancers alongside him, rather than this large set that only succeeds in taking up space, but this is a problem that extends much further than just this video.

SM’s choreography has been heavy on hand movements as of late (see: f(x)’s “Red Light”), and “Danger” seems to have suffered from the trend. I would have liked to see more motion in the dance scenes, but what dancing Taemin does show in those segments looks charismatic and appealing enough.

The parts he aces – no pun intended – are where he channels Michael Jackson‘s move set, something Taemin has consistently done throughout his career. At this point, he’s probably one of the best at it in K-pop, but he avoids making the homage overly gimmicky by adding his own distinguishable touches throughout his movements. 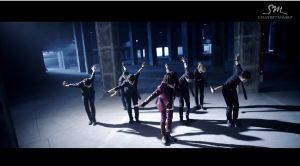 It’s clear that the Michael Jackson influence doesn’t stop with just the choreography. The song is probably even more so influenced by his style. In fact, the digitized crooning of “danger” along with the pre-chorus sound like they actually could have been on a track in Jackson’s post-2000 catalogue.

Placed between these segments are the insanely catchy verses, filled with pum-pum-pums and chants where Taemin asserts that he will “steal” his romantic interest and they’ll disappear into the night.

Lyrically, the song has a clever contrast. In the first half, Taemin’s brash and confident, dropping lines that express how mysterious and enigmatic he is in his pursuit, yet in the second half he admits that his love interest is trying to manipulate and control him in spite of his self-confidence. I guess this is why in the first line of the song, he decides that they’re the perfect match. 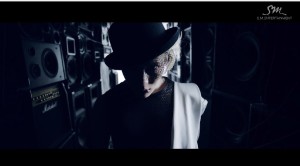 While I found the repetition of “danger” slightly dissonant, overall I think the song is really pleasant to listen to. The parts where Taemin is singing and not talk-rapping or chanting sound especially great, with gorgeous vocal layering and a well produced back-track building up the energy behind him.

I’m not pleased with how digitized the song sounds on parts of the deeply pitched verses, but they’re brief enough to not be totally inoffensive. After all, they help prevent “Danger” from having excessive high notes for absolutely no reason, one SM trend that thankfully doesn’t happen here.

“Danger” sounds like it could have been a SHINee song in another life, maybe before some of the Super Junior-esqe electronic embellishments, talk-rapping, and pum-pum-pums were added, but I think it’s the ideal, predictable choice for a Taemin solo. Although I would have liked to see the video divert some focus from Taemin playing with aesthetics, the electronic, bass-heavy, MJ-inspired song is something he’ll nail every time with no question.