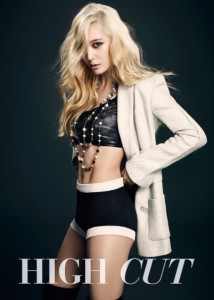 As far as beauty standards go, South Korea ain’t exactly a beacon of aesthetic diversity. There’s a certain “norm” that pervades society and manages to keep both men and women worried about general acceptance. That’s not to suggest that South Korea is the only country that adheres to strict standards of beauty, not by a long shot. But it’s pretty clear in its modern culture that certain characteristics are not only desired, they’re expected.

While there are artists of all shapes and sizes, only those who fulfill strict parameters of beauty succeed. Though talent ultimately dictates staying power, the sheer amount of groups who hold the “prestigious” title of idol—an interesting moniker drawing a line between groomed and prefabricated pop stars and their hordes of adoring worshipers—all share the same overall look: thin, exceptionally fit physiques; lily-white, nearly flawless skin; and sometimes heavily constructed, perfectly symmetrical faces.

However, there are artists who have declared with great enthusiasm that those ideals are not only exceptionally unrealistic, but also that not everyone prescribes to the social ideologies these beauty standards push.

The original lineup of the Piggy Dolls was a shocking drop of girl power. Their debut track, “Trend,” defied the industry, if just for a moment, exhibiting the pride and disillusion these women had with what society perceives as true beauty.

My body?
So what, my face is unique.
Check it out on the stage.
Look at me, we are trend.

I’m sexy, I’m looking good.
Check it out on the stage.
Look at me, we are trend.

They embraced their bodies and their faces. They exclaimed, “Yeah, I’m a big girl. That don’t stop you from lookin’ at me, ne?” It was bold and empowering, a song that declared that all women are beautiful no matter what anyone says.

Two years ago, Fat Cat released her own anthem of acceptance, asking the question “Is Being Pretty Everything?” Not only did she raise her voice in resistance to the unrealistic ideals that most seem to have concerning physical beauty, she reprimanded the shallowness of society itself:

Do pretty faces feed you?
They become the same after a month.
Why, why are guys like this?
“It’s always the ugly ones who complain more.”
Jerks who say that, please piss off.
The outside and inside aren’t always the same.

“Is Being Pretty Everything?” is a punch in the gut to all those who dare let their superficiality dictate how a woman is supposed to feel about herself. With so many women desperate to change themselves to fit into a societal norm of prettiness, Fat Cat ridiculed those forcing them into a corner because they don’t “fit in” with the aesthetic.

Body and face image most certainly aren’t the only barometer by which society measures the worth of its men and women. Perhaps the most controversial and questioned is that of skin color. “Shadeism” has become such an integral part of South Korea’s society, it’s all but thought of as a nonissue. However, for those of mixed heritage living in South Korea, the trauma and pain is still very much alive.

The undisputed queen of Korean hip-hop, Tasha (a.k.a. Yoon Mi-rae) dealt with the pain ridicule for a long time. Though she’s a pioneer in Korean music and a cultural icon for all of South Korea including those of mixed heritage, her life wasn’t all bliss and bubblegum. In her song “Black Happiness” she details her struggle from the time she moved back to South Korea as a child, to her accepting the beauty of her dark skin instead of letting society’s hatred consumer her.

My skin that was really dark when I was younger.
People would point their fingers at my mommy.
My poppy’s a black American, people are whispering under their breaths
Again like this and that.

There were always tears welling up in my eyes.
Even though I was young, I could see my mother’s sadness.
Feeling as if everything was my fault
Every day I’d wash my face more than twenty times a day.
I melt the white soap in my tears.
Inside I resent my black skin, why, oh why
Is the world judging me?

Every time I start to hate the world, I close both my eyes real tight.
I place my soul in the music my father gives me as a present.
Turning up the volume, I fly higher and higher.
La musique, la musique.

Yoon Mi-rae paved the way for newer artists of mixed African-American and Korean descent like Lee Michelle, who debuted with her own anthem of triumph and acceptance of one’s beauty with song “Without You.” She proclaimed her worth is not based on anyone’s approval, and she gave voice to her pride, singing out loud, “I’m beautiful without you. I’m meaningful without you.”

But it’s easy to find females who are sick of having to maintain some imaginary societal standard of acceptance. After all, women are always expected to mold themselves into something their patriarchy will find favor with just to be considered reasonably acceptable. After a while, though, some ladies just get fed up, throwing the middle finger in the air, saying, “Fuck the world!” However, it’s much more difficult to find men, more specifically male idols, who agree.

Whether we like it or not, at this point in the human experience men dictate what’s acceptable and what sells, thus their opinions hold a bit more weight (considering in a largely patriarchal society men pull the strings). Those women who’ve dared to speak up or who’ve bucked the trend either fit a very small niche market or fade into obscurity after a short time. So when a popular male idol group makes a statement about how society’s superficiality means nothing to them, best believe people notice.

Block B has made a point of affirming positive images of women who for all accounts shouldn’t be held in high male regard. Leader Zico has made very powerful comments to and about his female audience. Most recently, track “H.E.R” substantiated his and presumably the group’s thoughts about the supposed acceptable aesthetic that makes up his own culture, not flat-out cursing its existence, but uplifting those who would go out of their way to change their outer appearance just to please some dude.

The images, while wild and not exactly related to the lyrical content at all, do bring mirth to the idea that even those who don’t fit a particular mold in terms of beauty are still flawless. There’s nothing wrong with the love interest portrayed in the lyrics. She’s an ideal that makes so-called normal girls jealous just by her very presence.

Ooh wow, it’s amazing.
There’s nothing more to add to her beautiful body.
Normal girls can’t even compete.
They’ll probably gather together and talk badly about you.

Listen carefully.
Be careful of the wolves around you.
Bastards only care about outer appearance.
It feels like I’ve been hit on my head with a hammer.
I feel light-headed and dizzy.

Though no one would argue that K-pop is the standard by which society should hold its people accountable, as with all facets of pop culture, it does mirror what society itself seems to acknowledge as acceptable in terms of behavior and aesthetic appeal. It’s unfortunate that not many idol groups (meaning their companies) take it upon themselves to spread positive images of self-love and appreciation of one’s self without the need to please a prospective partner. Block B may not be the only male idol group to write or sing lyrics that speak to loving someone just as they are, but their popularity and presence in K-pop mean more people will hear their message.

With great hope, perhaps in the future artists and their listening audience will at least attempt to value the people they love without conditions or fictional expectations. Hey, one can always dream, right?