Can You Spot Orange Caramel in "My Copycat?" 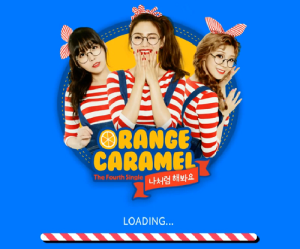 Creativity is never absent in an Orange Caramel release. They always seem to have a unique concept at hand, and this time it involves the ‘hidden catch’. How this works is at the top of some split framed scenes, the viewer sees a number. This is an enumeration of the amount of differences between the two on screen images. In this interactive MV, the girls have really outdone themselves with how much detail is packed into three and a half minutes. “My Copycat” is full of energy. Even with a great song, this scan and search video takes the cake for its inventiveness with many Easter eggs littered about the well put together series of images. Even if their original group After School isn’t putting out any new material, Orange Caramel seems to be making a bigger name for themselves these days. This is their second single of the year, and they may actually find even more esteem for this creative piece of work.

The game is simple. The girls each have their own solo scenes, but if you think you are seeing double, then you aren’t mistaken. The images are not mirrored or mere duplicates of one another. They are similar enough, but the viewer’s job is to spot the subtle differences (or not so subtle) that sprinkled about here and there. The scope and extreme attention to detail really flesh out how to make a simple concept exceptional. Things from shadows, animals, clothing, etc add to the fun. 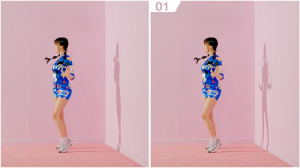 At first listen, the song is reminiscent of “Lipstick.” The intro has a horn refrain punctuated with a 90s Eurodance beat that is an earworm. The song is the definition of an Orange Caramel release. They have carved out a signature sound with their history of releases. This fits in nicely among their cuter discography and their upbeat dance pop sound. The choruses include a stomp/clap lead up that is made to rouse an audience to get up and move. The lyrics are about a fed up person who tells their lover that love isn’t difficult. They tell their lover to follow them in expressing their love:

“Is love supposed to be this difficult?

It’s not as hard as you think.”

The outfits in this video are also clever. The prints for each member’s individual scenes add a flair to colors of the MV and help to distinguish each member in their solo scenes. At one point, the clothing also becomes a detail that is different when the viewers are asked to spot the difference. Also, when they are together as a group, they wear a dress with an image of a woman’s figure wearing lingerie. They paired this with a very large pink feathered head wear. I am not entirely sure if they were trying to send a different message with this get up, but the image and headwear were a call to the can-can dancer which the song’s beat could also have derived from. In their clothing alone, they are able to express another way of copying that is layered within a video about spotting the difference among a variety of apparent copies of images. 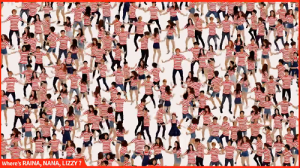 Adding even more depth to this game is the major crowd scenes. There are two big ones where the text asks the audience to find Raina, Lizzy, and Nana. This happens firstly during an all orange outfitted scene. The video is zoomed out and there is a lot of folks scattered about all dressed in orange. I’m not sure if anyone did spot the girls because of how zoomed out the image is (if you did, leave a comment down below). When I first came to this part in the video, I immediately thought of the Where’s Waldo (also known as Where’s Wally?). To my surprise the homage to this concept is also present in the video in the next group scene where the text asks the viewers to find the girls. The girls and a massive group of people are all dressed in the iconic red striped shirt and blue pants. It’s a replica of the concept in video form, and it is a fun way to explore this idea of the copycat.

One last major element is the dance. It is catchy and interactive – something that has become a trait of the group. The chorus is simplistic, but the finger dance at the start was something I wouldn’t mind learning. The ladies make it look extremely fun to do and with the big group scenes, the dance takes on a life of its own. It becomes something easy for the masses to take up and dance to and looks fun to do. Also, I enjoyed the parts where Orange Caramel would integrate lyrics in their choreography. The push and pull section as well as the hand holding parts seem arbitrary at first, but as they are done in conjunction with the lyrics become more playful than first anticipated.

Orange Caramel have become one of my favorite groups with their last few releases. The combination of their unique characters, detailed videos, catchy songs, and fun performances have crafted a group that has become more novel than cliché. This latest video exceeded my expectations once again because of how much life their concepts can take. Every detail seems to serve a purpose in the MV. Even the animals (the chameleon was a nice touch) play a greater role than serving merely as a background prop. Overall, a catchy (if not familiar) song paired with a video that is clever, excellent, and full of fun things for fans and viewers to look out for.

Were you able to find all the differences during the split screens? Did you spot the celebrity cameos? Could you find Orange Caramel in the large crowd sequences?