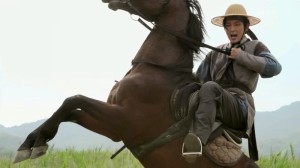 Joseon Gunman is practically synonymous with Lee Jun-ki, serving as an extension of his action-filled resume. The more I watch, the more amazed I am how how far he has come since his My Girl days, carving a niche for himself as an action thriller star.

After the first four episodes laid the groundwork for his revenge motive, the darker plot and tone starts to really kick in from there onwards. Yoon-kang (Lee Jun-ki) doesn’t disappoint as a lead character, bringing to the plate an intricately woven transformation from a carefree nobleman to a gunman full of vengeance, equipped with a occasionally questionable moral compass. The sneaky thing about portraying lead characters in a 100% heroic light is that it often leaves the hero’s actions predictable and obvious. Yoon-kang deviates from this norm, making clear that his life has been too unfair for him to care about anyone other than himself. His one goal is to take revenge for his father, and he’s doesn’t care who gets in his way. He’s so disillusioned to the point that he went as far as to slap his sister, Yeon-ha, to keep up the ruse that he’s merely a Japanese businessman. 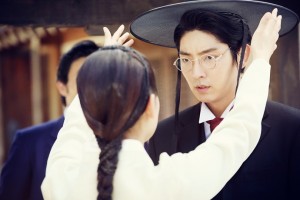 For thriller dramas such as I Hear Your Voice, the ethical question of whether it is right to mete out personal punishment on a criminal is always tackled. While more killing is never a solution, it always serves as a short-term gratification to vent one’s anger. Yoon-kang brings this revenge plot to the next level by forging a entirely new identity for three years, somehow managing to withhold his anger for that long. While this is to avoid suspicion from the villains, funnily enough, it’s the people who are closest to him (Soo-in and Yeon-ha), who constantly threaten the revelation of his real identity. Lee Jun-ki’s eyes does an exemplary job of showing how his character wordlessly struggles with ignoring his two loved ones, while unable to erase his feelings and memories of them.

As perfect as Yoon-kang seems to be, his one flaw lies in his hot-headedness. He’s impulsive and rash, often getting himself into trouble by falling into the enemies’ trap. Thankfully, he has his own little gang of friends to hold him back, and come to his rescue. How much do I love Sang-chu and Jung-hoon as his sidekicks? One claims credit as the gunman so that Je-mi can fawn over him, and the other.. pretty much fails at most things. 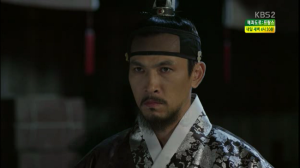 As Episode 14 ends with the supposed death of Merchant Choi, Yoon-kang’s reaction was absolutely spot-on and beautifully done. It wasn’t a punch in the air or a shout of joy, instead, it was anguish, pain, and bitterness all riddled into one emotion. It speaks volumes about what Soo-in has been telling him — that killing doesn’t solve the problem, and never will. Instead, it makes the merry-go-round of revenge spin even faster.

Soo-in (Nam Sang-mi) is nothing new as a saguek female lead (think Sungkyunkwan Scandal‘s Yoon-hee) — curious about the world, cross-dresses to be allowed to study, and has no fear of danger. However, other than being curious about gunpowder, she has been a very lacklustre contributor to the plot. She does a lot of passive reacting, and lending her house for people to stay. But to me, she seems rather ‘all talk, no do’, and frankly, that’s rather disappointing for the female lead in a sea of much more engaging characters.

While Soo-in comes across as passive, Hye-won (Jeon Hye-bin) is active 100% of the way, one of the most memorable second leads ever. Her character background is rather tragic, but she has used that as strength to carry on living. In the merchant world of males, she commands respect with her poise and confidence. Even when being taken as hostage, she remains perfectly calm, revealing her ability to deal with adversity. Before she attempted suicide, she never once was a victim of her circumstances, in fact, she always rose above her opponents. Her attempted suicide felt somewhat out of character, but I buy it after the double whammy of her father’s lies and the failure of her leadership. Her bashful confession to Yoon-kang revealed to us her feminine side, and her reaction to Yoon-kang’s rejection was simply heartbreaking to watch. 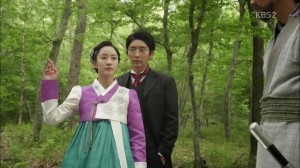 The father-daughter relationship of Merchant Choi and Hye-won is terribly heart-wrenching. Their past memories of slavery is partly what drives them to be so money-minded and off-the-moral-path, because they’ve seen how money can rule and destroy. It adds so much pathos and tragedy to these two characters, the moment she realized and rejected her father’s life as a gunman, when he only did it for her sake. This added dimension to a typical villain role actually made me slightly sympathize with them, especially when Merchant Choi puts his own life at danger to save his one and only daughter.

The other villains (namely the members of Suhoge) though, I have zero sympathy for. They have weird screechy voices that feel overdone and increases my dislike for them. They clearly have been playing this political game much longer than Yoon-kang, which explains how they constantly outmaneuver and thwart Yoon-kang. While this is upsetting for the viewer, it makes for rather satisfying twists and turns, while serving its purpose in forcing Yoon-kang to be more thorough and shrewd in his plans. 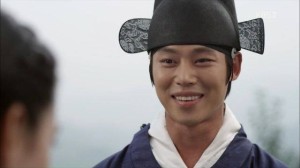 Minster Kim probably remains the one interesting person in the group, with his illegitimate son, Ho-kyung (Han Joo-wan), playing for the other side. While we have a united father-daughter front with Hye-won, this father-son relationship is inevitably fractured and fraught with tension. Not only do they side with different parties, both of them are also live in fear that their relationship would be uncovered. To further our sympathy for Ho-kyung, he’s has utterly been friend-zoned (bro-zoned?) by Soo-in, who only has eyes for Yoon-kang. And already, he seems the type of guy to let her go for her happiness. Aw.

Emperor Gojong is another fascinating character. While his heart is in the right place, he realizes that his hands are tied up by the other ministers, making him rather incapable. While he is keen to clear Yoon-kang’s father’s name, he is ultimately pressured into sentencing Yoon-kang to death for treason. Ultimately, this is the one thing that destroys Yoon-kang’s faith in the emperor. That said, I’m hoping that’s some redeeming arc in place for Gojong in the coming episodes. A weak king is never fun to root for.

The end of Episode 14 brings a turning point to the drama — Yoon-kang finally ‘kills’ Merchant Choi without much satisfaction, Soo-in enters the palace as the Empress’ study buddy, Hye-won takes a step to the dark side, Ho-kyung openly opposes his father. With 8 more episodes, there’s definitely a lot more character development and intricacies to be fleshed out. And now with all the secret identity hijinks out of the way, I’m really excited with what the series has in store. I have no idea what to expect, and that’s really the best place for a drama to be. I just hope it will reward the viewers with more than just playing tag with jailtime and revenge. 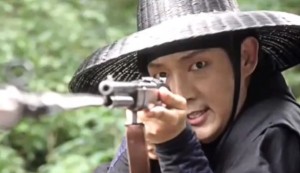 Generally, Joseon Gunman has done a great job of producing a clean drama, in the sense that every scenes happens for a reason, even if there’s too much exposition by the characters at times. Just when I thought Soo-in making fireworks was rather random, it later serve as a way for Yoon-kang to ask for her services to make a smoke bomb. Even lighter scenes such as Kanemaru learning Korean and Soo-in’s maid being air-headed serve their purpose in injecting some humour into the series. Love the characters, love the plot, love the action.

Anyone else hooked on this drama?