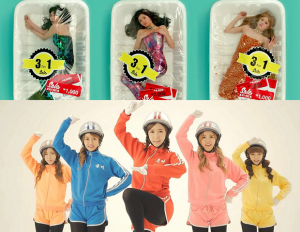 Idol groups are essentially groomed to put on different personalities to please fans and make their record companies money. However, there are a few groups that go above and beyond the call of duty. Whether it’s over-the-top silliness, unstoppable craziness, or attitude so fierce it simply can’t exist in the real world, some idol groups have the story, makeup, and style to be perfect for their own anime series. Anime in and of itself is a combination of powerful storytelling, incredible animation, and action of all sorts that’s completely out of this world. It’s a fitting way to represent all the boundless energy and talent of a group without having to worry about the limitations of the real world.

Now for the sake of keeping this list short, there are yet again some house rules:

1. Only idol groups. There are many soloists (Rain) and groups (YERY Band) outside the genre that would be perfect examples of artists who need to be immortalized by the best in Japanese animation. However, we have to draw the line somewhere, and based on what could round out a cast of characters and the nature of the K-pop idol group, only groups are applicable.

2. No groups that have been disbanded or are no longer active. So even though it would be a blast and a half to see the ladies of The Grace in their own kickass anime, it ain’t gonna happen on this list.

3. If the group is still active under the same name and have at least one original member, all members are eligible. Meaning every member of Super Junior is viable.

4. However, that also means no subunits. The show may include a group subunit at some point, but the entire group must star in the show (for example with After School, Orange Caramel can’t have its own show, but as a part of After School, a subunit wouldn’t be out of place).

Note: Yes, I know Orange Caramel may be its own group very soon and not a sub-unit but enough with the qualifying, let’s get to the list!

Now, without further preamble, in alphabetical order, here are some of the groups who I think deserve their own anime.

1) After School
With Kahi as their leader, this group of females is so incredibly ferocious, I can easily see them starring in their own version of Claymore—soldiers who destroy the demons of the world with their righteous swords of vengeance. They’re feared and revered by all who seek their counsel, and their name rings legendary in the ears of every man, woman, and child. However, if Orange Caramel is any indication, this group isn’t all doom and gloom. They’d probably work just as well in a show along the lines of Tokyo Mew Mew. The ladies of Orange Caramel have dressed up as sushi, Christmas trees, and fast food, and the group itself has been decked out in full-on marching band attire. Surely dressing like cats isn’t too much of a stretch. Besides, they’d still be a class of super soldiers… just with CrazyTown style costuming. Nothing wrong with that.

2) A Pink
There’s only one other group on this list that’s pretty much anime ready in its current form. If ever there was a female group just aching for an anime, it’s A Pink. This was probably the easiest group to imagine an anime for. Their year-round cuteness, female positivity, and tightness as a group make them perfect for their own version of Sailor Moon. They’ve got the energy, guts, and staying power of the ladies of this pivotal show. I don’t know a woman now who wasn’t at some point influenced by Sailor Moon and her group of planet-inspired Sailor Soldiers. In the same way, A  Pink has proven they are a female group that gives girls and guys alike a great deal of happiness and unending positivity.

3) Block B
The only other group on this list with a ready-for-anime makeup, Block B is essentially its own live-action version of Fooly Cooly: wild, loud, energetic… a bit confusing. Yup, that’s them. There’s a bit of tragedy (having to deal with an ugly separation from their record company, with the added trauma of their former CEO committing suicide), lots of weirdness (see: all of their music videos), an over-the-top leader, and an overall sense of enjoying their lives.

4) Brown Eyed Girls
An old-school group with power, bravado, and endless talent, Brown Eyed Girls has proven to be one of those groups you just have to respect. Whether as soloists or together, their ability to grab everyone’s attention is undeniable, and their strength as a group puts them yards above their younger peers. Their class and maturity make them prime for a female-fronted anime with leading ladies just as badass as they are. I’d say something along the lines of Noir. A classic anime with strong female characters is apt for BEG, given their message of independence and their ferocious attitude. After all, this is a group of females who essentially formed themselves, a rarity in an industry where record companies and Svengalis hold the reins of control over the construction and direction of their idol groups. They have the ability to transform themselves without losing any of their strength and integrity, and a group like that deserves a place forever imprinted in sharp lines and magnificent color.

5) Crayon Pop
Okay, so I lied. There’s one other group that just screams to have its own anime. Crayon Pop is essentially already there. All we need is an artist to put it on paper. They were seemingly created for the sole purpose of being an animated version of a group of singers set out to bring happiness and laughter to the masses, and whatever seriousness they may portray in the future, their seemingly evergreen precociousness is what we all see. Think of any insanely adorable anime—Tokyo Mew Mew, Lucky Star, Sgt. Frog (yeah, I said it. Try and tell me you don’t think their “Bar Bar Bar” dance would fit in with a show about space frogs), even Fruits Basket. Crayon Pop is the perfect marriage of campy silliness and undeniable cuteness that anime is made of.

6) JYJ
Quite frankly, they’re stupid, with stupid dumb faces, and yet they’re still some of the most talented blokes in K-pop. Also… they just so happen to have one of the most bizarre, frustrating, and heartbreaking stories in the industry. Without any real way to promote their music on variety shows (still… it’s been five years, you guys; come on. It’s also a shame, considering Jaejoong especially has always been favored by variety show host Yoo Jae-suk), this trio starring in its own anime would be perfect. Having spoiled fans with three vacation diaries (the 3Voices series) and two “day in the life” docs (Come on Over and The Day), there’s enough source material to provide an animated look at just what these idiots get up to. This show could be somewhere along the lines of Kids on a Slope/Sakamichi no Apollon, without the weird high school love triangle. A show in which the main action and drama is focused around the music they make together—sounds perfect. However, if their management company has anything to say about it, they’ll be starring in a musical version of Death Note.

7) Shinhwa
One of K-pop’s first-generation idol groups and one of its most celebrated, Shinwha could literally fit any anime archetype. As they showcased on their own variety show, Shinhwa Broadcast, they’re not above making fun of themselves. Their down-to-earth mentality and ability to see the silly in practically everything allow them to morph effortlessly between their on-stage idol personae and their silly off-kilter selves. A show like Kill La Kill or maybe even Lucky Star, both parody shows that poke fun at anime culture, especially the tropes that have seen them become incredibly popular to Western audiences (to the extent they sometimes get a bit, shall we say, carried away). With the men of Shinhwa already going through military, individual activities, drama with their record company, and still managing to stay together and forge ahead in spite of all the turmoil, they’ve become seasoned veterans who easily see the fun in everything. That being said, no one can forget the fierceness that was their comeback (can we say VOGUING!), meaning they’d be perfect for the sheer epicness of a show like Hellsing, Tangen Toppa Gurren Lagann, or Code Geass.

8) Super Junior
There’s positively no way you can deny Super Junior was made for (and possibly from) an anime. There are so many differing personalities and temperaments in the group, they make themselves prime for pretty much any anime you can imagine. They’d fit in a show with a crazy plot like FLCL, but given the cast of characters in their own lineup, they’d be perfect in a show along the lines of Ouran High School Host Club. DO NOT FIGHT ME ON THIS! Obviously their on-stage cross-dressing antics and overt skinship/fan service proves they have no problem blurring the lines between legitimate androgyny and textbook camp. And given the sheer amount of members (they’re like the Wu-Tang of K-pop—at some point I’m sure everyone in Korea was a member of Super Junior), there are plenty of diverse tastes to go around.

K-pop being the oftentimes campy art form that it is, I’m sure I’ve missed so many groups. Who are some idol groups you believe deserve an anime in their honor? What show would be their inspiration?