Woolim Entertainment really hit the nail on the head with Infinite H. With a track record of polished music, stellar production and an opportunity to see Dongwoo and Hoya experiment with their hip hop musicality, this latest “Pretty” comeback aptly from their sophmore album Fly Again allows them to demonstrate their multiple talents away from the shadow of seven members. And boy do they shine on their own.

After an excruciatingly long wait (almost two years guys!) we finally get to see the duo rock the stage together again and prove that they have still got it. Initial viewing clearly dictates that the concept they have chosen this time around is just as quirky and light-hearted as their previous release “Special Girl,” which is definitely not a bad thing. Their comedic take on hip hop embellished love songs provides an incredibly refreshing change to the music scene, and like many other people out there, is what attracted me to them in the first place. 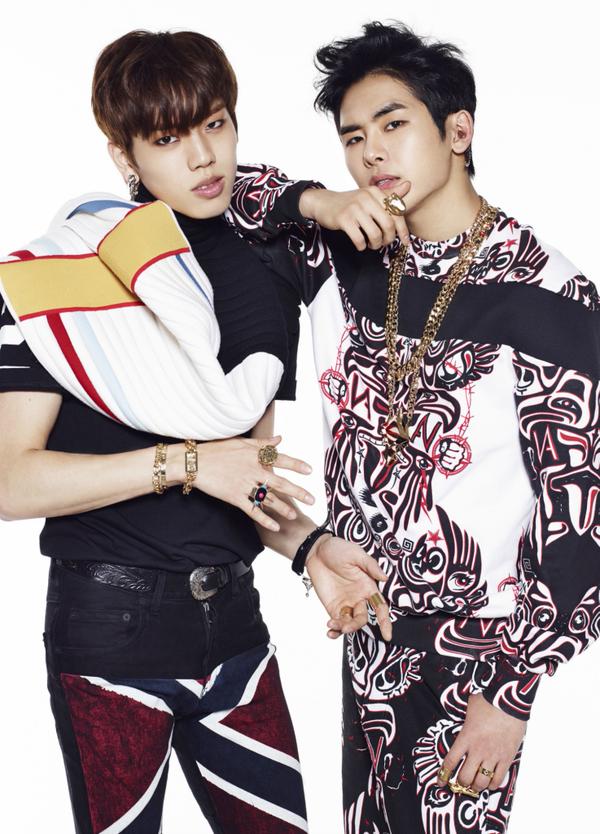 However, before we delve into the dynamics of the video there is a situation that is just screaming to be addressed. I’m going to call it ‘the plight of the inappropriate pants’ because there are not many standing reasons to justify why the stylists ever believed that the use of the Confederate flag on Dongwoo’s trousers was a good idea.

A brief history lesson for those who don’t know: the topic of the Confederate flag, its meaning and its use in modern society is a highly controversial aspect of American culture. Used to represent the Confederacy, a group of secessionist Southern States in the 1800’s who’s regional economy was almost entirely dependent on plantation system production operated through slave labour, the use of the flag has sparked many a divisive debate. It has been heavily championed by the Klu Klux Klan over the years, and many people have highlighted its credentials as a symbol of oppression and intense racism whereas others have spoken out on their views that it serves as an integral part of American heritage and history.

Whatever your opinion, we can at least agree that for it to be represented in a K-pop music video as a mere fashion accessory when it serves as an object of great turmoil for many people is really just not the greatest of ideas. I’m going to go ahead and say that this is probably just another annoying instance of the cultural ignorance that K-pop is infamous for. For other examples see here, here and here. It serves as another reminder that there are only so many times we can roll our eyes, pull our hair in frustration and plead with K-pop companies to increase their awareness of other cultures, before realising that it probably just won’t make a difference. At least we can find some consolation in that Woolim promptly edited out the stars on the flag from the images upon realising their mistake, however small it may be.

And now that we got that out of the way, here’s a list of reasons why I absolutely adore the music video.

We’re taken to a cartoon-esque courtroom. Hoya enters as the cheeky prosecutor and Dongwoo follows as the equally charming lawyer, both proceeding to playfully antagonize each other. Next enters the suspect, a pretty young woman who immediately causes both men to become slack-jawed and unwittingly captivated by her beauty. 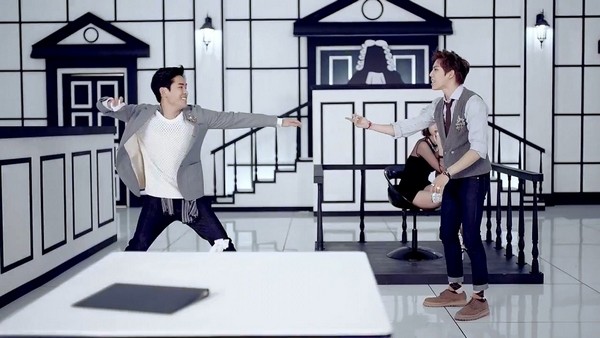 Cue an immediate interrogation, along with a simultaneous challenge for her affections, with both candidates using various flashback sequences as evidence to prove their side. We witness the ‘Fender Bender’ car crash scene, the ‘Mess Up’ market incident, the ‘Crazy in Love’ wall incident as well as the ‘Waterfall’ cafe accident, four amusing and unique scenes that playfully express how they are unable to handle her blinding beauty. But inevitably after our female lead is proven innocent, she leaves them both hanging with nothing to comfort them, but themselves. The cardinal factor which makes the MV so endearing is the fact that the storyline does not follow the romantic feelings dictated by the lyrics themselves, but takes a more relaxed and whimsical approach that works extremely well because this is just so much better than your boring old, run-of-the-mill sweet relationship video.

Few music videos have made me laugh as much as this one has, even after the fifteen times I’ve watched it. Whether its the facial expressions, watching Dongwoo do the splits with two shopping carts, witnessing them chase and throw things at one another in the courtroom or the absolute hilarity that is the ending scene, the music video is thoroughly enjoyable to watch and easily brings a smile to the face. 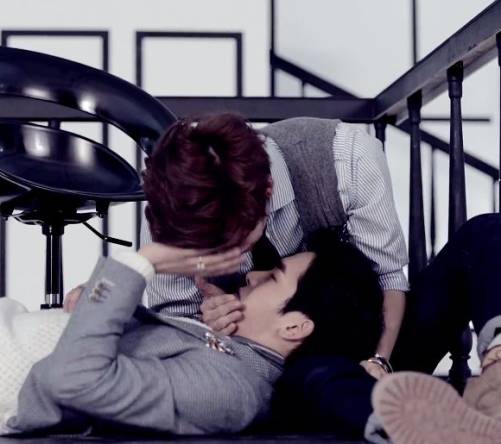 The great thing about Infinite H is that it’s a welcomed change to see releases where they are allowed to explore fun concepts such as this, away from the seriousness that Infinite as a whole normally exude in their MVs. Consequently, I am sitting over here banging my head on the desk for not realising much much earlier how insanely adorable Hoya and Dongwoo are when they work together. Seriously, a kitten wearing a tiara couldn’t distract me from them. However, fangirling aside, these two have an undeniable charm about them especially when doing comedic acting, that quickly changes into a certain fierceness and charismatic appeal when they begin to start rapping. The balance they’re able to achieve between the two extremes is flawlessly performed and makes for a very entertaining video. 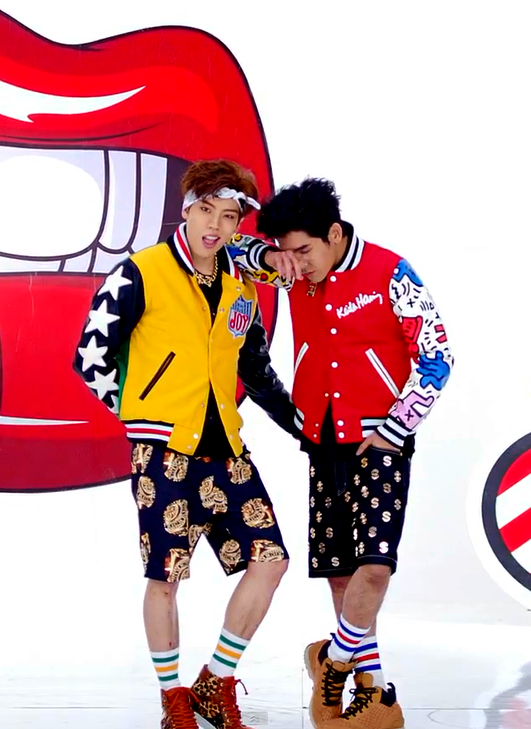 The video sets themselves are loud and laden with silhouettes mixed with extremely bright pops of colour that are very aesthetically pleasing to the eye, and appropriately add to the humorous concept of the shoot. Styling I’ll admit is a bit of a hit and miss (see above), but for the most part the outfits keep in tone with the rest of the components and make for a very well rounded, enticing MV with some of the most superior visuals that we have seen thus far this year.

Simple though it may be, for a song of this nature the choreography needs nothing extra. The idea is that Hoya and Dongwoo are fawning unconditionally over a girl, but as it’s meant to be a very light hearted hip-hop styled piece with a cool bass and lively synths — there’s no need for over the top or dramatic dance moves. Therefore the choreography is kept as a quirky, easy to follow routine that matches the song to a tee, and by no surprise is executed extremely well. 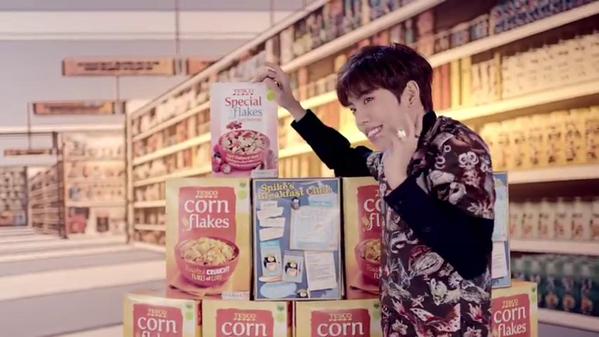 If you are from the UK you will probably jump and rewind the video a few times like I did to make ensure your eyes did not deceive you and confirm that yes those ARE Tesco branded cereal boxes that Dongwook is so meticulously arranging in the supermarket setting. Don’t you just love seeing references to your home country in K-pop?

I am definitely left impressed by this latest video despite uncertainties that there would be no accompanying featuring artist like we saw in their previous singles, such as Bumkey, to help them deliver their material. However, I think this single undoubtedly illustrates that the boys can do just as well on their own. Although, if you are in the need for features, worry not since sequential songs on Fly Again provide an array of artists that have collaborated with the boys including Swings, R&B vocalist Yang Da-il and Soo-jung of Lovelyz. And if “Pretty” provides any indicator, we all have so much more to look forward to from Infinite H.