The Korean entertainment industry is notorious for getting mixed up with and sharply criticized for displays of racial insensitivity. And I say racial insensitivity as opposed to outright racism because, in all honesty, the whole matter can be rather confusing at times.

Racist commentary, whether it’s in the form of spoken words or antics like blackface, appears on K-entertainment television fairly frequently, or frequently enough for a worldwide audience to be aware it. After these scenarios play out though, major networks and agency representatives are quick to issue apologies and explanations for what was broadcasted; But this is where it gets confusing.

Some networks, namely MBC, as well as some idols still do racially insensitive things despite the uproar that such actions have already incurred in the past. Then the issue grows more complex when K-entertainment pushes endeavors like the Hallyu Wave to spread Korean culture and music onto global audiences while K-entertainers and idols demonstrate significant racial ignorance of global audiences, and ultimately offend them. In short, Hallyu just makes itself look like some poorly written ironic joke.

As Hallyu continues to break into the global music and entertainment market, fans are going to arise and come together from all over the world, even if they don’t understand any bit of the Korean language. And with accessibility avenues like Youtube coupled with the social media phenomenon, international fans can be just as in-tune with whats going in K-entertainment as their Korean fan counterparts. That is why, I think, international fans are so taken aback when racial insensitivity rears it’s ugly head in K-entertainment. We as fans devote so much time to understand and enjoy Korean culture and music and drama and TV, but then suddenly we are slapped in the face with something like blackface, a direct and extremely racist mockery of African American people and, at times, their pop culture. In these situations, we often fight back against the ill-humor and stick up for ourselves and the multi-racial communities we come from, making sure that major networks and entertainment companies know of their wrong-doings and issue formal apologies. 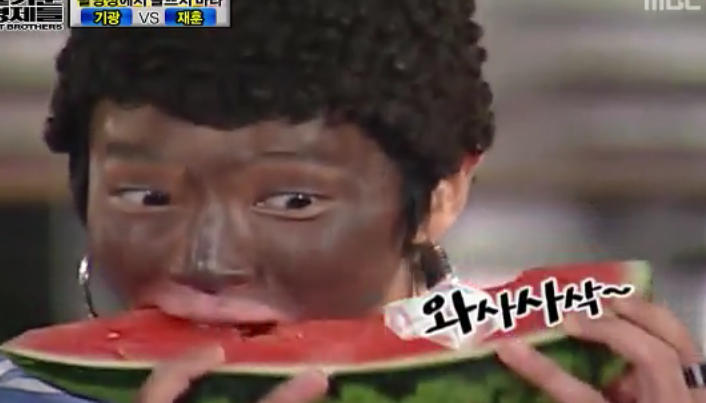 One African-American netizen IFUASKEDMETO shed light on racism and racial insensitivity in Hallyu in her post K-POP or KKK-POP? Covert Anti-Black Music Scene Sweeping America on the entertainment site Oh No They Didn’t. She was first to throw the idea of ‘KKK-pop’ into the online community as she provided readers with a summary of instances in which several big-name K-pop idols displayed racially insensitive behavior as well as participated in blackface. Her post ignited serious talk around world wide web and even reached Korean news sources such as Nate News. All in all, the post has made fans all the more upset about the apparent racism that exists the K-entertainment we love so much.

But as much as we international fans have grown sensitive to these topics and have exercised powers that have made many in K-entertainment aware of an eagle-eyed global audience, it seems so have Korean netizens as well. A few recent incidents have moved hoards of Asian netizens to call out Hallyu-entertainment for being racially insensitive. One instance was when MBC’s Quiz to Change the World did blackface back in January. After the episode aired, Korean netizens flocked to the MBC homepage and voiced their disappointment for the ignorance broadcasted on national television.

It’s only understandable that these foreigners are angry. These programs are not just viewed in Korea anymore, but around the world!

How can you guys be so careless?

Another fairly recent instance of racial insensitivity takes the form of K-pop songwriter Jenny Hyun. A couple of weeks ago, Jenny Hyun released several statements on her Twitter account that expressed some her personal but racist opinions about African Americans. The controversy caused an uproar among international fans, who swamped her Twitter homepage and official blog just hours after the tweets surfaced on the internet, and also gave netizens all over Asia the ammunition with which to criticize K-entertainment and K-pop idols’ racial insensitivity in general.

If anyone had doubts about ‘ifuaskedmeto,’ just look at the Jenny Hyun controversy. That is proof. The conclusion? The atmosphere around K-Pop is showing it really is ‘KKK-Pop’

This might turn the world against the Korean wave…These kinds of excuses and attitudes in K-Pop must not go global.

They [idols/entertainers] think ‘I want to sing and be cool like black people’ yet they have these narrow-minded views of the world. It’s like they think foreigners don’t exist.

Needless to say, Korean netizens themselves have made it clear that they don’t share all the same racially insensitive views that so many of their idols and TV shows sometimes portray about Korean people. But this is exactly why I say the whole issue can be slightly confusing at times. When racist incidents appear on Korean TV and in Korean media, it can be easy for global fans like you and me to point the finger at Koreans and call them all racist, more so if we have been thoroughly offended by them. However, it is obvious that racism among Korean people is not the case, especially considering the lengths to which Korean netizens have expressed their disappointment and embarrassment for skits like blackface. The real issue here is the irony that presents itself as Hallyu tries to reach out to global audiences while domestic K-entertainment is still so blatantly offensive to so much of the global audience. 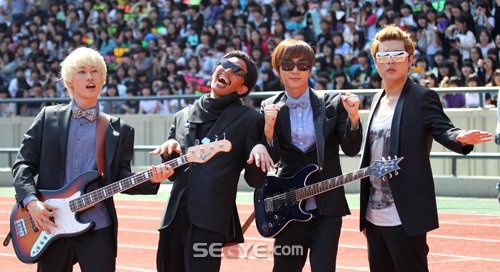 Which is why I can’t help but see racial insensitivity and Hallyu in the same mirror. The ignorant and offensive jokes that transpire back at the Korean homefront make the Hallyu Wave look like it has some one-sided agenda that caters to promoting and benefitting Korea itself as opposed to opening up Korean culture to the world and the world to Korean culture (an aim I always understood as one that was supposed to break down social and societal barriers, not reinforce them). And if Korean and other Asian netizens are openly confronting this racial insensitivity in defense of the global fan-community, what does K-entertainment have to gain from pursuing potentially racist antics?

While it warms my heart that Korean netizens have begun to react to racial insensitivity in K-entertainment, the existence of the racial and global ignorance in Hallyu continues to be an issue that makes me wonder about the purpose behind the Hallyu Wave — is it a profitable business for Korea or a platform for cultural crossroads, or both? Though I don’t think anyone’s intentions, save for Jenny Hyun, was or is to alienate racial communities or taunt their culture, I can’t help but feel that a sphere such as entertainment should be more aware of being racially offensive, especially if entertainment is a major reason as to why Hallyu has a global audience to begin with. Though K-pop may be K-pop for now, it seems like Hallyu runs the risk of being labelled ‘KKK-pop’ if it doesn’t do away with the racial insensitivity being broadcasted in K-entertainment.