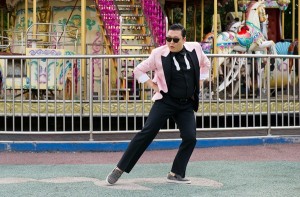 Psy dropped his “Hangover” music video earlier this month to mixed responses on both the song and video. After both “Gangnam Style” and “Gentleman,” eyes are still on Psy to see where he goes with his music and how he utilizes his spotlight, both as a musician and representative of Korean and even Asian music. In light of his choices in music and visual style, this week we asked our writers:

What are your thoughts on “Hangover”? How do you think Psy’s post-“Gangnam Style” fame is affecting his music? What direction would you like Psy to take with his music, and what are your hopes for the upcoming single “Daddy”?

Gaya: As a teetotaller, I’ve never been big on songs about alcohol and alcohol-related activities — I have trouble relating to the lyrics — but I did like “Hangover.” The MV made the most of Korean drinking culture, with Snoop Dogg being the conduit for an international connection. The way he was into the crazy things they did was a lot of fun to watch. Psy is doing a great job as Hallyu’s new ambassador to the West in introducing aspects of Korean culture in a way that doesn’t make me feel like thinking “Oh those crazy Asians!” Psy and Snoop would be able to pick up old ladies and unknowingly start bar fights in any other country.

“Daddy,” though, has me worried. “Gentleman” was quite the misogyny-fest, and I feel like we’re going to have a repeat of that. I don’t know exactly why I think that, though the masculine term in the song title and the way patriarchal cultures tend to depict masculinity might have something to do with it. 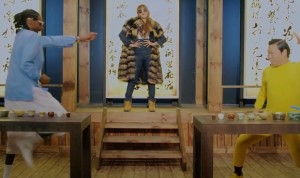 Mark: Wait, which part of the MV made you NOT think of “Oh those crazy Asians!”? Was it the kung fu throwdown caused by a misguided spoon? Was it the lack of conventional appeal of the women who were picked up? Was it GD poorly lip syncing at karaoke? Was it Psy using a fountain as a swimming pool? Was it CL randomly appearing? Or, was it the fact that Snoop Dogg is taking part in it which makes it more “international” and hip?

Psy is becoming a walking parody of himself and though he may be in on the joke, I’m not sure if his targeted audience knows or cares. I feel like with each release, the product is becoming a more dumbed down version of “Gangnam Style” that’s meant to appeal to the lowest common denominator.

Laverne: Interesting comments, Mark. I didn’t think about those aspects of the MV but now that you’ve mentioned it, it did have some of the typical Asian stereotypes common in the West. I don’t think that would have been a problem had the song and MV not been geared towards the international community. Unfortunately, the video did reinforce those stereotypes, and I bet many people probably laughed at instead of with it.

That said, I love the song. Sure it’s repetitive and Snoop dominates, but it’s the perfect summer drinking song! “Hangover” is fun and annoyingly catchy. I have no shame in admitting it was played at my birthday party. It’s aight, this the life of a superstar.

Idelle: I really do have to concur with Mark on this one. The video is a caricature of too many Asian clichés as it is, and it really gets to me that the Korean media is touting Psy as Korea’s national representative and being one of the pioneering Asian artistes to break into the Western market. If Psy were conventional musically rather than appearance-wise (looking like a typical Korean ahjussi), he would, frankly, never make it. 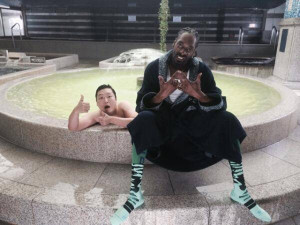 People aren’t interested because they think he’s got a story to tell or has good music to share — they’re interested because they know that he’s going to be ridiculous with “a distinctly Asian flavour,” whatever that means. And he lives up to expectations, I suppose. The more ludicrous the better, and extra points if it’s filmed by someone with yellow skin AND someone with brown skin. Because, you know — internationalisation! Globalisation! We’re all so tolerant and accepting these days.

Also, if “Daddy” has Lolita-esque undertones to it…

Andy: I resisted watching “Hangover,” since I didn’t have high expectations for a song with that title. Especially when the artist is Psy. My inclinations were right: the song is not particularly good and the MV is simply a caricature of Psy (and Asians, as mentioned by others). There really is no redeeming story to go along with the song, which we did have a little bit of with “Gangnam Style.” Then there’s the overly done autotune. “Hangover” should be considered a wash and buried deep in a hole of obscurity.

Since his surprising fame, Psy has become a shadow of himself. He’s essentially becoming a stereotype for his people, and that’s a shame. We know he’s capable of producing beautiful music, and even fun songs with a life lesson. It would be great if he would return to that part of himself, and maybe he will when he releases a new album.

As for “Daddy,” the first thought to come was “Who’s your daddy?” which means this song will probably be ridiculous, shallow, and have suspect gender-related undertones. Psy can do so much better. After all, he did release “Father.”

Lisa: Excuse my bad pun, but I think that this song would be excruciatingly painful to listen to if you did have a hangover. But maybe that’s the whole ironic schtick.

I found this video pretty funny, and I like the collaboration with Snoop Dogg. I already find Snoop to be unintentionally hilarious; him fake-chopping Psy’s back while he vomits into a toilet is a priceless vision I could never have imagined, and I love their love shot. The very obvious references to marijuana (“waking and baking,” Snoop Dogg’s presence) are similarly entertaining: The combination of Snoop sanitizing his well-known drug usage and the utter taboo and illegality of marijuana in Korea creates a push-and-pull between cultures, yet one that is engaging to ponder rather than stressful. However, I was amused for the first few minutes, but as the MV went on it felt more and more bloated. I expected better of a Psy MV than the repeated inclusion of trite medium-close-ups of the duo’s faces against a plain backdrop. I wanted the MV to push boundaries even further into the realm of hyperbole and absurdity. 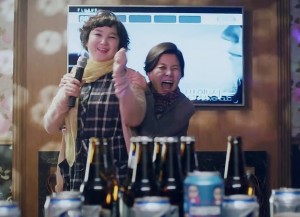 I personally like that our pair of protagonists party with more age-appropriate women who don’t fit one main societal standard of beauty (read: youth). It would have been more stereotypical to pair them with women who look like Hyuna or Ga-in, as per his previous hit MVs. I actually think that the MV resists several stereotypes of Asians in major ways — coming from the U.S., one of the most prevalent Asian/Asian American stereotypes is of the “model minority” Asian who doesn’t drink, party, or have a life outside studying. And in this MV, the women party just as hard as the men without resembling supermodels. However, I don’t think that will stop some viewers or news sites from pushing barely-veiled prejudices onto the MV, and it’s true that the kung fu scene plays into established stereotypes.

Gaya: I’ll give you the high kick at the start of the brawl, Mark, but bar fights aren’t that out of the ordinary. Though, I was listening to a podcast with an Australian actor talking about how Americans thought he was an alcoholic because he had two beers at lunch, so maybe I bring a more lax perspective as an Australian (who doesn’t drink, but has seen others hit the bottle — and boy do they hit the bottle).

And now that you mention it, Psy swimming in a fountain can be read as a “crazy Asian” moment; I thought it merely as a callback to his previous MVs. But considering that those had a stronger “crazy Asian” vibe, I can see what you mean.

But the rest, I don’t know: beer-goggles are universal, and like Lisa I liked that the women partied just as hard as the guys — in South Asian cultures, women drinking is a major taboo, why is why I love that women can freely participate in drinking in South Korea. Not that it isn’t problem-free, but I appreciate the equality nonetheless. 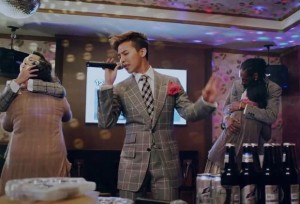 As for GD, I don’t think anyone knows what he was doing, to be honest. Probably even himself.

Joyce: Psy has practically got the attention of the whole world after “Gangnam Style,” and I’m not entirely sure he knows what to do with this attention. While “Gangnam Style” had natural humour, swag, and attitude, it sort of all went downhill from there. He keeps trying to force a hook into his releases, and it grates on my nerves so much. “Hangover” probably fares even worse than “Gentleman” in my book, utilizing more autotune and less Psy, which is frankly very disappointing.

If I were Psy, and pretty much had everyone’s eyes on me, I’d be doing my best to show my talent and own individual style — since that was what made “Gangnam Style” a hit anyway — instead of trying to preempt (inaccurately) what people want from me. He’s guaranteed millions of views no matter what he releases, so he might as well take a risk and try to impress, rather than … whatever he’s doing right now. He’s not exactly making the best use of this amazing publicity opportunity to cement himself as not just a one-hit worldwide wonder.

With a MV and song like “Hangover,” I expect most international audiences to view Psy as an entertainer rather than a musician. And if that’s where he wants to go, that’s fine. But frankly, I think Psy can do much better than that, and it’s such a pity that he’s walking down the path that’s “easier.” And obviously, “Daddy” doesn’t sound like there’ll be a change in direction either. Such a pity.