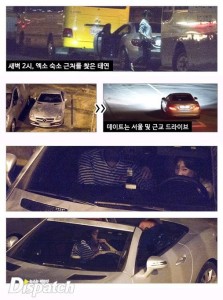 Dispatch has once again hit the jackpot with their intense journalism! This time, the news outlet has captured Exo’s Baekhyun and SNSD’s Taeyeon on a supposed date.

Baekhyun is rumored to have been a Taeyeon fanboy and it seems his dreams have come true! The two have allegedly been dating for four months, according to Dispatch.

Whether SM will deny or confirm the relationship remains to be seen but the pictures are pretty damning evidence. SM has previously confirmed other SNSD members’ relationships so it is likely they will confirm this as well unless they are worried about possible backlash from Exo fans.

Congrats to the couple and hopefully both fandoms will be mature about this relationship!