Lizzy Plays Coy in "Not An Easy Girl" 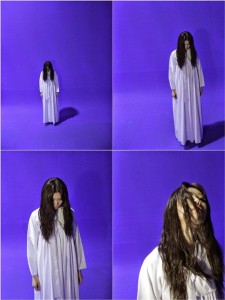 With Nana appearing left and right in variety shows and dramas, and Raina releasing her solo album last year, it was only a matter of time before Pledis Entertainment properly promoted Lizzy, the third and final member of company jewel Orange Caramel.

With the announcement that the single would be a trot track, it seemed like no one knew what to expect — especially between the sultrier singles of After School and the experimental, youthful releases of Orange Caramel. Luckily, “Not An Easy Girl” proves to be the best kind of surprise as Lizzy’s solo debut takes on a traditional tale with an updated spin, complete with Orange Caramel quirkiness.

If the opening scenes of “Not An Easy Girl” strike viewers as familiar, it’s because the entire music video is comprised of clips from the 1961 movie Seong Chunhyang, which is based off one of the oldest and most well-known pansori, Chunhyangga. Set in Jeolla, Chunhyangga tells the tale of a beautiful daughter of a kisaeng named Chunhyang who catches the eye of Yi Mong-yong, a nobleman. Though she initially rebuffs his attempts at courtship, over time Chunhyang falls in love with Yi Mong-yong and the pair secretly marry despite differences in social class.

Yi Mong-yong later leaves for Seoul, and without her husband Chunhyang quickly catches the eye of a new, corrupt lord in the village who attempts to claim her as his concubine. Chunhyang’s loyalty to her husband and defiance anger the lord, and she faces punishment before Yi Mong-yong returns from Seoul as a newly appointed royal inspector to save his wife. Chunhyang ascends rank to become a magistrate’s wife to Yi Mong-yong, and the two live happily for the rest of their lives.

The editing of the video deserves a mention, as Lizzy is very seamlessly inserted into the movie over the original actress with the help of a green screen. White spots of film damage and the original credits add to the old fashioned flair of the video, while the lyrics of “Not An Easy Girl” relate to a love story of more modern times. The subject matter of the song chides an unknown suitor for carelessly flirting, using cliché lines and monetary gifts as Lizzy asserts that her affections are hard-won. 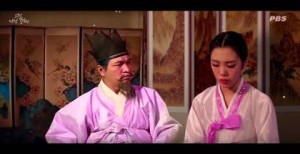 Possibly the best moments of the MV are found where the modern dating commentary becomes integrated into the antiquated film setting. The original Chunhyangga pansori is a commentary on the restrictive social structures which Chunhyang overcomes in her quest for freedom from the class structures which dictate her life. In the music video, Lizzy is just as coy and strong-willed in her take on Chunhyang.  “Don’t try to win me over with those designer handbags,” she sings at one point in the video to a bewildered Yi Mong-yong before tearing herself away from his embrace. The rap portion of the song, featuring her Hitmaker producer Hyung-don, is similarly comical as it is lipsynced by the corrupt village lord, who lays it down with verses such as:

“You held my hand, you kissed me

And now you say you’re not an easy girl?”

While trot-inspired songs have been done before, Lizzy may be the most recent idol to most fully embrace the genre. It fits her and her previously mentioned penchant for trot — not to mention her country “satoori idol” image. The musical style also suits Lizzy’s thinner voice more so than ballads, and automatically sets her apart from the more standard pop fare of solos. “Not An Easy Girl” does have elements of pop present in the tune, but it is firstly presented as a trot piece. 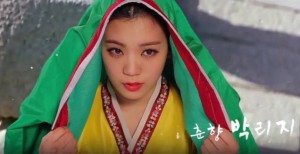 As a result, Pledis has seemed to adjust their promotional tactics in order to appeal the song to a wider demographic including older audiences who are more likely to be receptive to trot. Lizzy preformed her debut stage of “Not An Easy Girl” on the broadcast National Singing Program rather than Inkigayo or Music Bank, and has also released a ‘hanok version’ of the song performed in front of traditional Korean homes. The live stage of the song itself is worth a watch as the performances are abridged enactments of Chunhyangga in their own right, featuring waiting women, Yi Mong-yong, the prison guard, and Lizzy, who dons a modern adaptation on the hanbok.

Given Pledis’s ongoing financial and promotional problems supporting its artists, Lizzy’s solo from the start has raised a few eyebrows — whether for musical direction or other implications (where art thou, After School?). Regardless, “Not An Easy Girl” is a well-produced and catchy debut in its own right as a trot track that warrants a listen from all audiences, earning a 4/5.