Kim Hyun-Joong Comes To An End In "Timing" 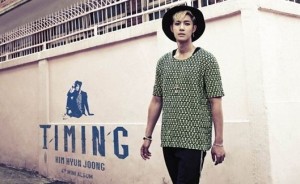 The rare, ever-moving Kim Hyun-joong has been spotted again! Last seen in Japan with the single Hot Sun. Prior to that, he could be spotted in the period drama Inspiring Generation. However, it appears that Hyun-joong has migrated back to his native territory of the K-pop scene with his fourth mini-album, Timing.

Kim Hyun-joong’s last Korean foray, Round 3, had an aggressive hip-hop bent. This is best evidenced by “Unbreakable”, done with K-pop’s favorite bad boy, Jay Park. Timing is the antithesis of Round 3. It’s happy, upbeat, and full of love. Literally. Every song is 100% about a relationship. Clearly, Hyun-joong has realized that he is love’s bitch, and he is man enough to admit it.

Of course, being love’s bitch does not automatically make a relationship run smooth. “His Habit” is a fun, peppy number about Hyun-joong begging his girlfriend to let him out of the doghouse. His girl, personified by Two Months’ Lim Kim, has taken umbrage to his constant wandering eye, and Hyun-joong doesn’t deny this. Instead, he says that while he’s faithful, he looks at other girls out of habit. The light, early-seventies dance music meshes oddly well with the lyrics, as Hyun-joong is taking the issue lightly. He’s brushing off his girlfriends’ concerns, because, in his mind, there’s no problem if there’s no cheating, and there has been no cheating. Lim Kim turns in a stellar performance as his frustrated girlfriend, though it’s really the two side by side that make “His Habit” really work. Kim Hyun-joong is turning up the charm, while Lim Kim is adamantly not impressed. You can hear the glare. 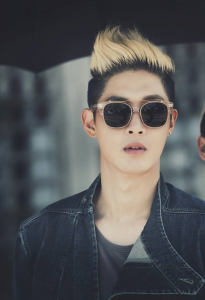 “Beauty Beauty” is very obviously cut from the same musical cloth as “His Habit”. They’re so similar that I missed the transition on the first listen. Of course, when one fun song that makes you want dance is followed by another, it’s not much of a negative. There are differences between the two, though. While much of the charm of “His Habit” comes from the dueling vocal performances and the differing perspectives, “Beauty Beauty” is charming in the typical pop way: a really catchy hook. The chorus of “Beauty Beauty! Beauty Beauty!” is laid over a guitar riff that brings to mind sipping drinks on a beach, checking out those who are checking you out. It’s impossible to not dance to, regardless of where you are.

After the Timing’s dance-fueled, lighthearted first half, things get more serious with “Nothing on You”, which features Phantom’s Hanhae. It slows down to a mid-tempo, which is fitting for a more emotional song. Unlike the more shallow nature of the album so far, this is a genuine love song. This is Kim Hyun-joong making sure his special lady friend knows that he does appreciate and respect her. While a more than a bit on the dull side, Hyun-joong’s performance more than makes up for it. He might not be a powerhouse, but he has a skill for emoting through his voice that really shines here. Hanhae’s verse doesn’t really add much, but it breaks the otherwise monotonous flow, and that gets it many points.

The last track is “What I Wanted To Say”, a straight-up heartbreak ballad. It has more energy than the typical break-up number, something owed mostly to the excellent use of piano, and Hyun-joong’s performance capabilities. The end of a relationship is sad, but not usually paralyzing. The regret over things left unsaid provides its own kind of fuel; bitter, but still useable. Here, Hyun-joong is pushed by the destruction of this relationship to finally fight for it, to cop to the feelings and little things he let slide. It’s a pretty good ballad, driven by actual emotion made tangible instead of the usual blank “I’m sad, I swear” act.

On first listen, I came to the conclusion that Timing was well-produced, but lacked the spark needed to really make it pop. I had placed as 3/5— pleasant, but not special or noteworthy. And then the realization hit: Timing is a story. There is one consecutive narrative linking all four songs, and that is what makes it stand out. 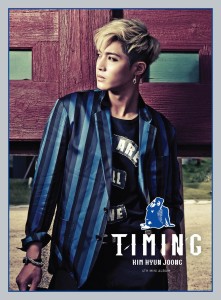 “His Habit” is Kim Hyun-joong and girlfriend having a fight over his wandering eye, but instead of just being angry, his girlfriend dumps him. “Beauty Beauty” and “Nothing on You” are his attempts to win her back. The former being a light-hearted number because he still doesn’t take her anger seriously. The more emotional “Nothing on You” shows that he’s finally understood that his habit makes her feel like he doesn’t really care about her and is attempting to persuade her otherwise. When he finally accepts the fact that his girlfriend has thoroughly dumped his ass, he gives in to the feelings that he never expressed in “What I Wanted to Say”.

In this time of shuffle modes, personal playlists, and digital singles, the art of the album is often lost. We pick and choose what we like, ignoring the context created by the other songs. Of course, because of this, most albums no longer bother to provide any context based on song order. Why put effort into something that no one cares about? Yet Timing gives us something long forgotten. When listening to the last track, it carries the weight of the previous tracks. The break-up has a reason, and the previous attempts to win her back show us exactly what he didn’t say. It allows the emotions of the various songs to build on each other, instead of starting from scratch each time. It adds so much to the album despite appearing to be an inconsequential thing. Timing is not perfect, but it comes pretty close.