Music & Lyrics: Nell and Their Laments of Life

For the newest installation of Music & Lyrics, let’s leave the world of pop music for a while and take a look at the alternative side. When it comes to indie music in South Korea, Nell must surely be considered as one of the best-known groups both nationally and internationally. Their haunting music, Kim Jong-wan‘s soft but urgent singing, and certainly their elaborate lyrics have garnered them a legion of fans over the years.

One of the reasons for Nell’s continuing popularity might be their consistency. While the specific type of language Kim Jong-wan, lead singer and main songwriter, uses is diverse and expressive, there are a few themes that run through the whole of the band’s discography.

This discography begins with the release of their first indie album Reflection of in 2001. In a way it is impressive that the songs they created back then could easily be recognized as Nell songs even by a listener who just recently got into their music.

One such example is the track “쓰레기” (“Garbage”), which already features the steady rhythmical pattern one so often hears in Nell songs. Another typical feature, the onset of a full-blown electric guitar sound about midway through the song can also be found. The lyrics tell the story of a speaker who has been left by their lover and can’t cope with this new reality:

About two years later, Nell released their first major studio album Let It Rain. The album, and its title song “Stay”, increased the band’s popularity immensely. Yet this was not due to a significant change in sound or subject matter, but probably just because the band was finally introduced to a larger audience.

Another song from the album, “시작의 끝” (“The End of the Beginning”), shows this quite nicely. It also serves as a first example of Kim Jong-wan’s beautiful lyricism. With the extensive use of metaphors, the words elude a one-sided interpretation. The lyrics open themselves up to the meaning the listener wants to attach to them — whether it be the accusation of a former lover, a general lament over hardships in live, or something else:

“It seems there is always misery behind beauty.
Flying towards that single light like insects,
even though you also ran into it for the sake of that something,
into despair you’ve never seen before.”

Slowly working their way up the charts, Nell’s fourth album Separation Anxiety (2008) must surely be considered as one of their most commercially successful efforts. It also spawned one of their most popular songs, “기억을 걷는 시간” (“Time Spent Walking Through Memories”).

Compared to their other singles, “기억을 걷는 시간” is noteworthy for how calm it is. The song begins without drum accompaniment; and instead of the electric guitar onset described earlier, the climax of this song is emphasized by the addition of a piano melody. As so often, the lyrics are a kind of one-sided dialogue by the speaker directed towards a former lover. The speaker cannot accept their break-up and is haunted by memories of the couple’s time together:

Separation Anxiety, ironically, would be the band’s last album for a while, as members went to the army and came back. After they returned to the music scene in 2012, they began one of their most ambitious works: In many ways a staple in rock music, Nell released the first of three albums that would be conceptually linked over the next three years.

The album names Holding Onto Gravity (2012), Escaping Gravity (2013), and Newton’s Apple (released about half a year ago) hint at a topical cohesion, yet this does not lead to Nell neglecting the subjects they have dealt with since the beginning of their career. The song “Fantasy”, off of their last album Newton’s Apple, showcases this well; once again addressing the inability of the speaker to let go of the past: 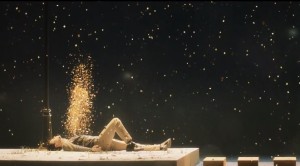 While this article can only serve as a very rudimentary outline of Nell’s discography, it has hopefully succeeded in working out some of the major themes the band has sung about time and time again ever since the release of their first album 13 years ago. The importance of the past and memories, as well as the inability to let go of both, is central to Nell’s work. Often, this past involves a lover who has left the speaker. Additionally, the sadness over this loss, and the general ugliness of the world, often leads to an intense self-loathing of the speaker (occasionally going as far as contemplating suicide).

Although the band has also released uplifting songs, the main solace in Nell’s lyrics might lie in an acknowledgement of one’s own painful experiences. In a world where the listener must often suppress negative feelings so as not to appear weak, it can be soothing to hear that one’s emotions are utterly normal:

“Just accept that sometimes, there is a sadness that can’t be erased.”