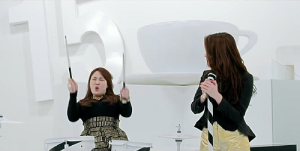 After making a short lived comeback earlier this year with their digital single “Can’t Hide It” the girls of 15& have a made a quick comeback with their latest track. Jimin and Yerin have brought the high energy title track “Sugar” off their first full album of the same name. It has been about a year and half since this duo has made their debut, and this title track shows how much they have grown since “I Dream.” While the R&B styling of “Can’t Hide It” nabbed them their first number one rank on the Gaon charts, “Sugar” is more on the jazzy pop side. The music video is an equally fast-moving black and white heavy affair with a large array of backup dancers and band to boot.

The title track is a big band inspired affair. Keyboards, drums, guitar, and horns make up the production of the song. The girls call for the listeners’ attention at the beginning of the song, and they command it with their strong vocal delivery. The lyrics are about making their love interest’s heart become sweeter and more open to them. The increasing tempo and catchy chorus full of “ooh ooh oohs” make this an addictive listen.

Even though the increased tempo is a change of pace from the R&B or ballad singles, it isn’t the first time the girls have tackled an up-tempo track as “Somebody” allowed them to showcase their ability to dance and perform. Probably the most surprisingly aspect of the song is when Jimin has a rap breakdown at the middle portion. I actually quite enjoyed her attempts at rapping because she injects a lot of personality in her delivery. The rapping adds another dimension to the group, especially allowing Jimin to show off her charisma.

Speaking of charisma, it is apparent that Jimin has marked this MV as the moment to showcase her personality. She goes a bit over the top at times, but her exaggerated, quirky, and zany exuberance is still enjoyable to watch. In contrast Yerin is definitely more reserved. She is still a bit stiff in her movement but also exhibits a different calmer type of charm. If Jimin has staked claim as the bubbly ecstatic member, Yerin would be  considered the cool collected one in the background.

During their live performances for “Can’t Hide It,” I felt as if the girls needed some simple choreography so that they would be more comfortable on stage. My hopes were answered as the duo shows off their dance moves in this video. The signature move is the fast finger movement which mimics spreading sugar in imaginary cups of coffee. The girls shimmy with their backup dancers as they ask their interest to “show me how you shake it.” The backup dancers add to a very fun atmosphere and contribute to adding energy to the dancing. The movement is focused more on having fun and is something that adds character to a song where energy demands lively motion. 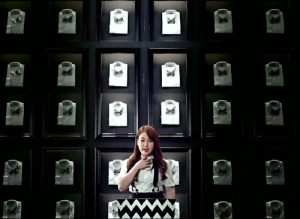 The sets are well designed to draw focus to certain elements in the video. The smallest semblance of a plot I can glean from the MV is that the girls drive over  to add sugar to a big cup of coffee. Black and white dominates the colors utilized in this MV. The palette allows any deviant colors like the reds, greens, gold, and pinks to stand out and helps to emphasize the simplistic quality of the MV. The instruments help draw focus to the different compositional elements of the song.  The lighting helps to illuminate the podium where Jimin drops her rap section.

Overall, this video is smart and very well done. It hones in on specific details and is interesting to watch — especially for an MV composed of a few sets. The song is a strong title track. It highlights the strength of their two vocals while adding a lot of fun in a big band heavy track. With the amount of energy and sweetness these two, have it’s impossible not to get caught up with their sugary rush.