The last couple of weeks haven’t been the most fun for the Exo members; but they pushed their worries aside to kick off their first concert tour The Lost Planet in Seoul. For three nights, fans rejoiced in the many things Exo’s setlist had to offer: SNSD covers, lyrics for teaser track “Beautiful” and humptastic floor work for “My Lady.”

But while I was checking out these fancams, there was apparently one that I had missed. Because I’m not the biggest fan of “Mama” I had not seen the short introductory dance Exo did before their performance of it until a fellow Seoulbeats writer pointed it out.

As an Australian who has watched at least a couple of Bledisloe Cup matches, I immediately recognised the routine above as being from the Haka: the traditional dance of the Maori, the indigenous people of New Zealand. In Maori language, the word “haka” simply means “dance;” and while there are several different types of haka, the most well-known are the “war” Haka, or Haka peruperu (from “peru,” which means “anger”). Other Polynesian peoples have their own dances analogous to the Haka, under different names.

The aim of the war Haka are to challenge and intimidate the opponent; men protrude their tongues, widen their eyes, contort their faces and hit their bodies to appear fearsome. At the same time, the dance provides a surge of energy to its performers, strengthening their fortitude. Women and children have also traditionally performed the Haka, with the women even leading the men in the dance; but in modern times, the Haka has become more well-known as a dance performed by men.

As with all cases of colonisation, Maori culture diminished in the wake of the British Empire’s invasion of New Zealand in the 19th century. It wasn’t until the 20th century that the renaissance of Maori culture began in earnest; and the Haka is a key symbol of this resurgence, serving as a reminder to all Maori of their culture and tradition. The Haka is a key part of Maori activism, being performed at protests; it is also treated as an artform, with Haka competitions taking place between schools and other groups throughout the year; and it has been absorbed into New Zealand’s official ceremony as well, with the Haka performed to welcome dignitaries and on important occasions.

The most famous use of the Haka, however, is in sport, especially rugby. New Zealand’s men’s rugby team, the All Blacks, perform the Haka “Ka Mate” before every international match. This is a tradition that began in 1905, and though other Hakas are also performed, “Ka Mate” — created by warrior chief Te Raupuhara as he evaded capture by a rival tribe hidden in a sweet potato pit guarded by his host tribe’s cheiftainess — remains the All Blacks’ calling card, and their performance of it is a highlight of their matches.

The verse chanted by the All Blacks above is identical to the one Exo did at their concert, though SM did have them did throw their group name in there as well, as is their wont. The “genius” behind this performance is none other than Tony Testa, a person who does not appear in any way or form to be Maori to any degree. Like I’m not already pissed off at the man…

It is not necessary to be Maori to perform it — many All Blacks players, past and present, are non-Maori — but the Maori connection always remains intact and never far from people’s minds. Yet Exo’s performance has very little connection to actual Maori culture besides the chant and some of the moves — and this is the key point, because taking something that is an important symbol of a resurgent, but still marginalised, culture and divorcing it from its origin comes across as insensitive.

Local media in New Zealand has already caught on to the story: 3 News spoke to a Kiwi attendee of the concert, Stephanie Town, who said:

When I realised this was some version of the haka I was witnessing, I just gasped and covered my mouth in shock… I felt uncomfortable upon seeing it, because of how meaningful it is. No one likes to see their heritage used for entertainment value like that. Knowing that they didn’t personally choose to do it makes me able to forgive it. It’s the choreographer who should have known better. 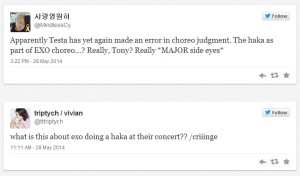 And across the ditch (AKA the Tasman Sea), Australian SBS news quoted twitter users, calling it “cultural ‘criiinge.'” K-pop fans have used social media to express their disappointment at yet another instance of cultural appropriation; but many people with differing views made their statements online as well, similar to Stephanie Town’s own thoughts:

Maybe I’m being too generous, but it’s nice to see people enjoying parts of New Zealand culture internationally, and flattering in some way to see these idols of mine pay a kind of homage to our culture

The core issue appears to be a lack of communication. The idea of sharing cultures would come with the understanding that by doing so, a dialogue between members of different cultures is opened, through which the bonds of humanity are strengthened. In reality, though, this rarely happens. There is often no attempt to connect with the people of a culture; instead, they are ignored in favour of the “pretty things” they produce. Maybe, just maybe, if people of non-dominant cultures felt appreciated as people and less as a means to an end, there could be a chance that they would be more willing to freely share aspects of their culture?

While an overview of the Haka’s history has been provided above, it is only an overview. If you are interested in learning more, I recommend the NZ government’s web app as a good starting point; I also encourage everyone to read the story behind the creation of “Ka Mate” as it is a fascinating read which gives further insight into traditional Maori life.