5 Ways To Get Noticed By Your Idols

For most of us, K-pop has only ever existed to us via a computer screen. K-pop exists as a fantasy — you have never really seen it in person, you don’t really know what it’s like to be in its presence, all you can do is be satisfied with live streamings and videos that are filmed half the world away from you.

But then, your opportunity finally arrives. Your favourite idol is coming to your town for a concert/fanmeeting, and it’s your one chance to finally meet your cellphone screensaver. Suddenly, you are bombarded with many questions — where to stand, what to wear and so on. But your most important question should be, How do I get noticed by my idol, such that he/she will notice me?

But fret not, in case you have absolutely no clue how to go about attracting your idol’s attention, Seoulbeats is here with 5 ways that will practically guarantee your favourite idol to look in your direction, in increasing order of extremeness. 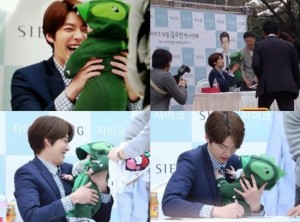 It’s probably the simplest out of the 5, however it requires a willing participant. You’ll be hard-pressed to find an idol who doesn’t have affection for kids. Since most of you readers probably won’t be able to pass of as a one, the next best thing to do, is to somehow coerce a kid to come along to catch the attention of your idol. Once your idol’s line of sight is directed at the kid, try to wave wildly or throw kisses and hearts to ensure that you get your idol’s attention and make eye contact. Since the idol has already acknowledged existence of an adorable kid in the crowd, rest assured that he/she will be taking many more glances back in your direction.

In the case where you are unable to find a willing participant, an unwilling participant might also work. I’m sure a crying kid will get as much attention as a smiling kid. Also, a point to note, the chubbier the kid, the better, as it will induce the idol’s desire to pinch the kid’s cheeks. Also, think of it as inducting the kid at a younger-than-normal age to K-pop. 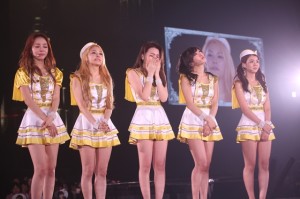 A tried and tested method, and it’s also pretty easy to carry out. Many fans engage in this method, since it requires minimal preparation, just a lot of guts and a loud voice. The trick in making this work flawlessly lies in two very important points — when to scream, and what to scream.

The optimal time to shout is probably during the emcee parts, where the idol has just taken a pause, and the crowd is waiting in bated breath. You have to do it the instant that it’s quiet, or else another fan will beat you to the punch. It’s not recommended to do it in between performances, since the idol’s earpiece might be plugged in, and you run the risk of them either not hearing it, or not being able to reply back to you.

Screaming generic statements such as ‘I love you’ or ‘Will you marry me’ are fine, but they are not memorable. If you’re an avid fan of the idol, shouting a catchphrase of the idol, or the idol’s nickname usually leave a deeper impression, because it shows you’re an die-hard fan. Basically anything quirky would also evoke a response.

The downside of this method, is that the idol might not spot you in the sea of faces just based on the direction of your voice. Some of you guys might be a little shy, but think of it this way, you’re probably never going to see most of the crowd ever again, and this is literally your only chance of making some sort of interaction with your idol. Give it a shot, it’s pretty exhilarating. 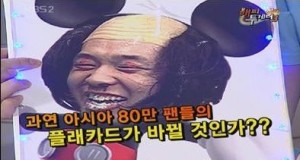 This method was inspired by an account of Yoochun on Happy Together years ago. He mentioned that during concerts, some fans actually carried a hideous placard of him, which constantly distracted him through the performances. This is actually a pretty ingenious idea. Instead of carrying placards that are a dime a dozen and shows either a normal photo of your idol and statements of the form ‘I love you’, go for the impact. Paste mortifying photos of your idol on your placard, with either embarrassing nicknames or ludicrous statements such as ‘I’m pregnant with your child’. Make sure the placard is in the line of sight of your idol, and it will be sure to catch the eye of your idol, and probably that of the other members and the audience. Depending on the personality of the idol, he/she will either find it terribly entertaining, or avoid ever making eye contact with you. Either way, some attention is better than no attention, no? 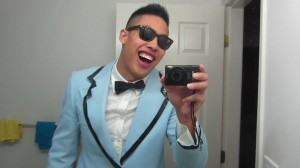 A little more extreme than the previous ones, you have to be prepared to attract stares. While you can always put down your sign and hide it, you will be quite at a loss, if you even attempt to cover up your outfit. However, if you’re willing to take the chance, dressing in a very out-of-the-world way is a surefire way to get noticed, given that you are within sight of your idol. What outfits would work the best? Preferably a comical costume that your idol was forced to wear before, since that will definitely bring back haunting memories. Even a stage outfit that was previously worn by your idol will also be able to stand out. If all else fails, drop by the nearest costume store, and don something that will stick out in the sea of fans, such as a Wonder Woman or a Superman outfit.

Tears: the key to anyone’s heart. Crying fans are not uncommon, but definitely rarer than non-crying fans. Since you’re pretty desperate and willing to do whatever it takes, why not shed a few tears? After waiting for eons to see your idol in the flesh and hear them thank you for your support, I’m pretty sure tears would come pretty easily to you. If not, eyedrops are always handy. Just remember to dramatize a bit, and act like seeing your idols is the only item on your bucket list. Wail loudly too, if you are within ear shot. If you’re lucky, you might even get a word of comfort from your idol!

These are my 5 ways of getting noticed by my idols, out of which, I’ve only had guts to try two of them (can you guess which?). While it might have been embarrassing, it left me with delightful stories to tell, and the assurance that I made eye contact with my idol.

What are some of the things you readers have done to get your idol’s attention? 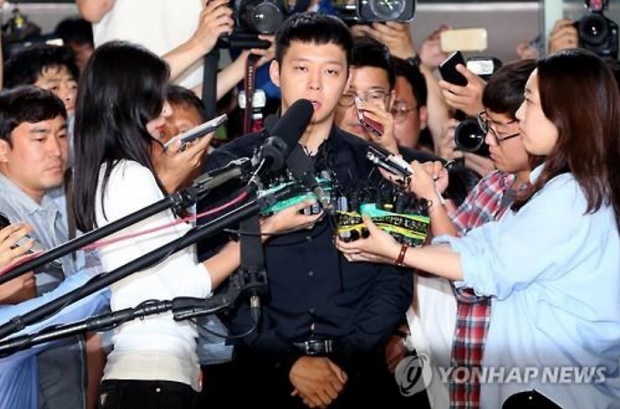