With JYJ‘s comeback right on the horizon, fans are all hoping for one last chance for JYJ to promote on broadcasting stations before they are whisked off to the army. While this seems highly unlikely in the near future because of the sheer dictatorship of SM in the entertainment world, it doesn’t stop us from wondering what it would be like for JYJ to appear on television. Yes, they will put on stellar live performances on music shows, but what we all really look forward to is their variety show appearances. Thus, in dreamland, these are the seven variety shows that JYJ should appear on. 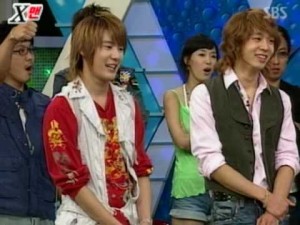 Inviting guests on Running Man is always tricky because 50% of the success depends on how sporting or variety-savvy the guests are, and the other 50% relies on their rapport with the RM cast. Fortunately for us, JYJ will likely score A+ with these two criteria. With the easygoing and bumbling personalities of the three boys, we can be assured that protecting their image is definitely not on top of their list at all — something that tends to trip up idol guests. And although they have been away from the variety scene for years, their experience assures me that their sharp tongues are definitely still in them somewhere.

JYJ’s interaction with the cast will also be something to look forward to. Considering that they have been regular guests on X-Man years ago, a lot of that great comedic chemistry will be revived with Jae-suk, Haha, and Jong-kook. Whenever Homin appears on RM, it’s always hilarious to see how awe-struck the cast is before attempting to get close with them, which then always induces Jong-kook’s protective-hyung tendencies. What wouldn’t I give to see the Commander constantly jump to his dongsaengs’ defense, even when they are evidently incapable of drawing a rhino. Also, what with Yoochun starring opposite Yoon Eun-hye in I Miss You and Ji-hyo being in the same entertainment agency as the trio, I foresee many loveline jokes being dropped here and there, poking fun at Jong-kook and Gary.

And lastly, it’s been so long since I’ve seen JYJ do variety-type missions, and I want to see them indulge in just having fun and interacting with the cast. Jaejoong‘s 4D tendencies and randomness is sure to be the star of the episode, and I’m just to itching to see JYJ’s great comedic timing and chemistry slay. And if someone can bring back the ‘Of Course’ game, ratings are going to skyrocket through the roof. 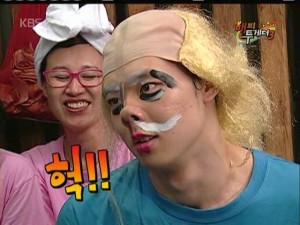 Compared to mission-based variety shows, JYJ would also do well to appear on a variety talk show because they often have crazy stories to tell, including a whole ton of bromance-tastic stories from their past years and from their own individual activities. Once again, they are on familiar terms with the MC cast, which would further escalate the ridiculous stories and comments thrown back and forth. Micky Myungsoo, Banjun throwback, anyone?

Although my favourite segments (in which DB5K set the record for inducing the most painful stomachache from laughing too hard) ‘Challenge! Memorize Song’ as well as ‘Don’t Laugh In the Sauna’ are no longer around, it doesn’t even matter. Yes, it’s a sad thing that we won’t get to see Yoochun in a bald wig trying to make Myungsoo laugh, but why do I get the feeling that this embarrassing incident is definitely going to be mentioned during the episode?

4. Our Neighbourhood Arts and Physical Education 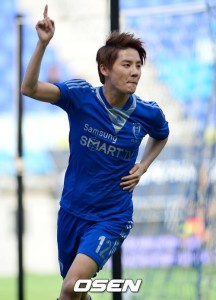 Junsu is the captain of the FC Men celebrity soccer team. It seems like such a pity that he has to miss out on participating in the soccer segment of this sports variety show, while his teammates Ki–kwang and Doo-joon get to kick some ass on the field. Junsu has always mentioned that if he hadn’t become a singer, he would have gone on to be a professional soccer player. While it’s occasionally tough to connect this competitive sport to goofy Junsu, this would provide an additional dimension of Junsu the soccer player in addition to his well-known musical actor and pop singer reputation. Not sure if Jaejoong or Yoochun would able to contribute in any way, but hey, maybe they could be the opening act or cheerleaders for the games!

5. Laws of the Jungle

Yoochun mentioned before that he wanted to appear on Jungle ever since it started airing. He cites his own wanderlust and enjoyment of camping to be the main reason for his desire to join. Whether this sentiment carries across to his other members or not, can you imagine these three pretty boys conquering the jungle with their limited know-how? A lot of ignorance and unglam-ness — yes, I think I would tune in for that.

Perhaps JYJ’s star power is a little too high for this little cable show, especially since their counterpart Homin hasn’t appeared on this show before. However, I think this is an appropriate channel for new K-pop fans to be exposed to this ball of hilarity known as JYJ. I’m itching for them to be treated as rookies again, needing to prove their variety talents during the ‘Profile Check’ segment. Bring back out Junsu’s dolphin squeals and Jaejoong’s creative voice impersonations. Make Yoochun re-enact his cheesy drama scripts. Make them reveal each other’s secrets. And of course, I’ll be there with my popcorn to watch them mess up their ‘Random Play Dance’ segment.

7. GIVE THEM THEIR OWN VARIETY SHOW

And really though, JYJ doesn’t need a MC to spice things up. Even from their short interviews and Instagram videos, it’s easy to see that they are very capable of entertaining themselves as well as the audience. It’s legitimately tougher to be a fan when the celebrities don’t appear on variety shows because there’s a loss of connection and insight into their lives behind-the-scenes. Who cares if their solo variety show isn’t that funny; fans really just want to see them as normal people in their own natural habitat — which is, of course, going to be funny in every way possible. Whether or not it’s mere footage of maknae Junsu being bullied, Yoochun tinkering with his compositions, or just Jaejoong being a boss in the kitchen, I’m so in. I just miss them so much on variety.

What are some other variety shows you think JYJ should appear on?