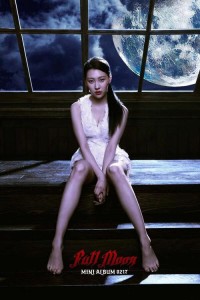 It’s official: Sunmi is on her way back to K-pop!

Following her successful solo debut with “24 Hours,” Sunmi announced that she was preparing for a comeback; and at midnight in Seoul, she uploaded the first couple of teaser images to Twitter.

It’s a bit Gothic and it’s a bit creepy, but there is a romantic wistfulness to these images: Sunmi cuts a lonely figure both inside and out of a bare, snow-dusted cottage, the full moon her only company. The image has sparked questions of a possible vampire theme for Sunmi’s first solo comeback; even though vampires in K-pop feel so 2012, it would nonetheless be interesting to see how Sunmi and JYPE would handle such a concept — if it is at all a vampire concept.

The lead-up to the image releases came in the form of an open Twitter Q&A session run by Sunmi herself. Most of the discussion was in Korean, but there were a couple of English tweets which were responded to:

“Full Moon” is slated for a February 17th release: readers, what are your thoughts on these teasers? Has it gotten you even more excited for Sunmi’s comeback? And does anyone else want her blingy manicure, or is that just me?