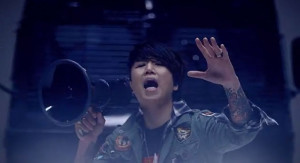 Korean rock veteran Kim Bada returns to the scene with his latest single and video, “Moonage Dream.” Both the video and song are an anthem of sorts, rousing the crowd to move, organize, protest, or maybe just to fight for their right to party. It’s brazen, loud, and sounds like the sort of song to play at the end of any successful revolution.

It opens in black and white, kids on a couch watching television. Their faces are shrouded in the sort of ennui and apathy that seems to define youth of every generation at some point—nothing new to watch, nothing new to listen to. Then Kim Bada flashes on the screen sporting an old military-green jacket adorned with buttons and badges. He’s holding a bullhorn, and a tank creeps toward him from the back. It’s all the typical makings of a man protesting… something—the war, the government, the plight of Korean society. Whatever it is, he has infiltrated these kids’ minds and spirits. They rise from their stagnant positions on and around the couch and walk toward the television with curiosity and a bit of confusion. Then everything gets a bit wild. 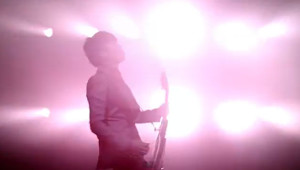 The premise is simple enough. In a world of black and white, Kim Bada is the only hint of color in these kids’ world. It’s only natural all his fire and loudness would attract the kids, calling to them as something of a Korean rock Pied Piper. As a lot of rock videos tend to go, the main attraction, i.e. the musician, is almost separate from the overall storyline of the video. Following in true fashion, he has a segment all his own, where he’s both the singer and the band, playing both the keyboard and guitar and laying down the vocals as well. His performance space is a neo-industrial background, complete with holes in the wall which emanate bright lights that wash out his face in their glare.  It’s typical music video fare as far as that goes. 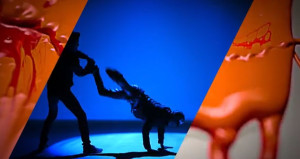 However, the MV for “Moonage Dream” sends a very powerful message of freedom from apathy and a dull world where a television screen watches you instead of you taking control. And that’s what he forces these kids to do. Once they realize that, yes, he’s talking to them, they get themselves in gear and the world is awash in color. Literally, the screen cuts into multipolygon segments, the center highlights this sudden burst of happiness, with kids breakdancing, jumping, girls expressing bold sassiness, hands on hips and hair flipping. These images are surrounded by two panels of fluorescent paint being presumably poured down a wall. Interspersed with scenes of him performing the song, there are scenes of the kids infiltrating the performance space, joining their leader in musical ecstasy much like a crowd at a show for Arcade Fire—still rocking out, but not so hard the girls get jostled and end up losing jewelry. While bright colors and lots of movement are always guaranteed to grab a viewer’s attention, there’s nothing exceptionally impressive about using the tactic in the video, except to show the stark difference between one reality and another. 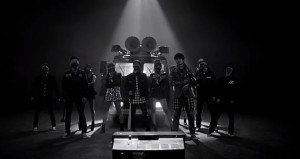 The climax of the video is certainly intriguing. Kim Bada somehow leaps from his world of Technicolor loudness, reaching out to their world of black and white. Hard scowl set and bullhorn at the ready, he leads the kids back to their nearly empty television room. The lads and ladies have bandanas across their faces, the guys are outfitted with bats and axes. He raises the bullhorn to his lips, and with his warrior cry, everyone begins to beat the television to a pulp à la Office Space. They’re literally breaking out of the box, destroying the very thing that kept them captive in a state of their own nonchalance.

Kim Bada, as always, sings with such passion it’s hard to not love him. His voice is rough, yet there’s a subtle sophistication in the way he sings his notes. Though the tone isn’t at all the same, his ability to infuse grit and emotion into his notes his reminiscent of Hyde. The man emotes without holding back, and his voice is able to evoke the sort of emotions that stirs an audience to do something… anything. You just have to move, if for no other reason than to find out why the man is so emotionally charged.

The music is light, if that makes any sense. Within the frame of a rock song, heavy drums and blaring guitar, there’s a very pop element. It could be the use of synthesizer that puts a little sprinkle into this grittier piece of music. Or it could be the use of more major chords than minor that lightens up and puts a little more smoothness into the grit of the vocal. But the lighter arrangement infused with Kim Bada’s evocative vocal performance blasts this track into summer jam territory. It’s uplifting, powerful, and even anthemic. 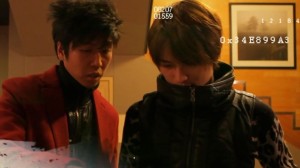 It’s interesting to note that he’d originally written this song for Jaejoong’s first full-length rock album, having already gifted the singer two songs on his first mini-album. However, Jaejoong turned down this track, allowing Kim Bada to rearrange the song and release it as the first single for his own debut solo album.

Though some may disagree, it’s a good thing Jaejoong turned this song down . It’s an anthem mostly fit for a voice as seasoned and steady as Kim Bada’s. Even in moments of unhinged abandon, he’s able to settle on a note and give it everything he’s got without losing the integrity of the note itself. With a semipsychedelic video and a powerful pop-tinged rock composition, “Moonage Dream” lives up to its name. 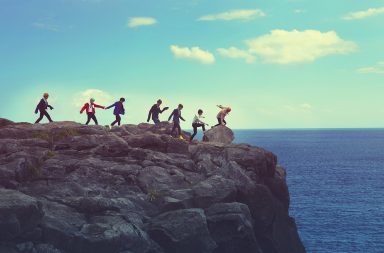