There’s so much going on in this picture, I’m not sure what I should be offended at. I’m not even sure what I’m looking at. But I do know that this picture doesn’t make me happy.

News of American rapper Snoop “I Used To Be A Big Deal” Dogg‘s involvement in Psy‘s upcoming music video has been swirling around for a while, but like most things Snoop Dogg/K-pop related, Snoop Dogg’s appearance in the “Gangnam Style” star’s video hasn’t garnered much conversation or interest.

Until Snoop Dogg posted this gem on his Instagram yesterday. 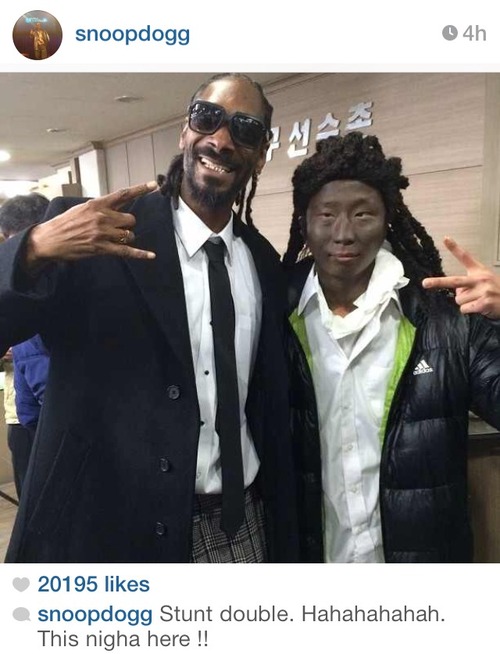 Is this a behind-the-scenes shot from Psy’s upcoming video? (Yes, probably.) Is the guy in blackface really a stunt double, or is Snoop Dogg trying to make a funny? (Nobody knows.) Is blackface okay, now that Snoop Dogg seems to be cool with it? (Nope.)

But the most important question of all: Should you be offended, and why or why not? It’s an honest question, y’all; there’s so little context to this photo — theories on the mystery blackface man’s identity have ranged from being Snoop’s actual, honest-to-goodness stunt-double for the MV, to a random cosplaying fan, to (gulp) an actual character set to appear in Psy’s MV “emulating” Snoop as a joke.

We’ll make our judgments and cast our stones accordingly once more information comes out. Regardless of the real reason behind this case of blackface, though, I know I’m not too thrilled about the Westerners who are going to point to this photo and say “See? Asians are the most racist people on the planet and this picture proves it! We white people would never do blackface, even though we, y’know, invented it! Asians are definitely more racist! Because Confucianism and nationalism and all those other things all Asians believe in!”

You know, like every other time blackface happens in K-pop. Sigh.