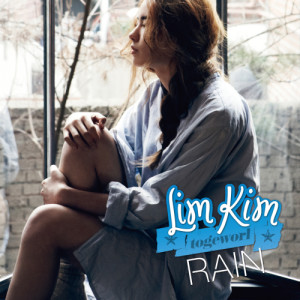 Still fresh from her debut which took place only a few months prior, Kim Ye-rim, better known as Lim Kim, recently released “Rain,” a pre-release track to whet the public’s interest for her upcoming mini album. Lim Kim first attracted the public’s attention through her stint on Superstar K3, where she was awarded third place along with partner Do Dae-yoon as the duo Two Months. While Do took a break from public life to resume schooling, Lim Kim debuted a bit earlier with her first album, A Voice, led by the hypnotizing “All Right” as its lead single.

With her unique and soulful voice, Lim Kim gained attention almost immediately after her debut. Other than her appearance on the popular Shut Up! Flower Boy Band, she recently appeared on the popular variety program Running Man, exposing her to the public eye even more. With “Rain,” it seems as if Lim Kim is taking full advantage of the trends surrounding her, for the track aims to stimulate hype and build suspense for her next release, a smart move for any up-and-coming act.

Her voice is what got the public interested in her in the first place, so it’s a clear relief “Rain” makes her voice the centerpiece to the entire effort. Truly, Lim Kim’s voice shines with “Rain.” Her voice carries this breathy and airy feel to it that makes her timbre so intriguing and distinguishable, more akin to an indie artist rather than a pop act. Yet she has such amazing control of her voice that makes her such a delight to listen to at the same time. While her intriguing vocal color was used to paint her as mysterious and alluring with her last effort, “All Right,” “Rain” instead chooses to paint her voice with warmth and familiarity, creating a lighthearted and breezy song that makes for an all around pleasant experience.

Truly, pleasant is the best word to describe “Rain.” While there’s no one completely memorable component about the song, it manages to deliver with its classic and nostalgic charm. Rather than coming off as overly-sentimental, the antiquity of the track is actually very appreciated, for it creates a feeling of familiarity that only soothes the listener, enchanting them deeper in the song’s spell. 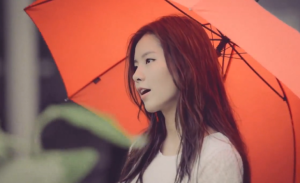 Moreover, the song has this laid-back jazzy feel that suits Lim Kim’s voice so well. The arrangement is very calming to listen to, being simplistic and minimal. A repetitive guitar loop forms the foundation of the song, which is complemented by delicate piano adornments in the background, reminiscent of raindrops hitting the ground. The simple and repetitive nature of the song allows Lim Kim to just flow through the song with minimal effort, making the listening experience all the more relaxing.

Despite the song’s simple and carefree nature, the lyrics of the song actually carry an underlying darkness to them. The lyrics speak of an individual feeling emotionally numb and lost, and deceptively, Lim Kim’s delivery actually reflects the lyrics’ sentiments. On first listen, Lim Kim’s execution mainly sounds whimsical, being breezy and drifting. However, looking closer into it, her voice carries this slightly detached and introspective element to it, alluding to the emotional numbness the song describes.

Rain – I still don’t have any memories
Because I’m just a twenty year old girl
Rain – in my earphones, the singer is singing a song about rain
What is she so sad about? Why is she about to cry? 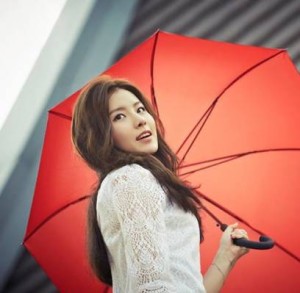 The accompanying music video for “Rain” is just as pleasant to watch as the song is to hear. Fittingly, the entire video is themed around the rain. Starting off inside on a bittersweet rainy day, the nostalgic mood is instantly settled through the presence of the record player which plays a haunting version of the song as our heroine hums the song as she does her makeup. After writing the song’s title on a window with her lipstick, she heads out and the song starts playing. From here, the video features little else but Lim Kim strolling around loftily through the streets with the rain pouring behind her, with her trusty umbrella in hand. Little scenery scenes are occasionally added to add variety in the visuals in the video, cutting from pretty landscapes, to shots of the old record player, and even whimsical scenes of Lim Kim’s umbrella spinning in the foreground.

The entirety of the video is very simple and minimal, much like the song it accompanies. However, what is outstanding about the video is how it follows the progression of the song so naturally. Lim Kim’s footsteps match the strums of the guitar so perfectly as she walks, and her spontaneous dance steps and footwork not only contribute in painting the whimsical, indie-like feel of the video, but they also follow the delicate piano embellishments that are littered generously throughout the song. Little things like the record player coming to a stop as the pace of the song changed slightly or Lim Kim stopping abruptly and tilting her umbrella in front of her to mark the start of a new verse were such small delights that made the video all the more calming and pleasant to watch.

Other than the pacing of the video, the song’s aesthetics also deserve much praise. The video’s visuals are crisp and clear, and it featured some interesting camera angles one doesn’t usually see in music videos. The video used some pretty unorthodox camera angles, leading to some fairly interesting and pretty shots. Whether it was the visual of rain in between two brinks on a brick wall or the sight of water dripping from a plant, these shots further enhanced the video’s rain theme and gave a bit of spice to the mostly uniform aesthetics of the video. What was also noticeable was the video’s focus on Lim Kim’s footsteps. Not only did this help highlight Lim Kim’s foot work during her spontaneous dances, but they also help show the puddles and splashing raindrops on the wet ground — further painting the scene of a rainy day. 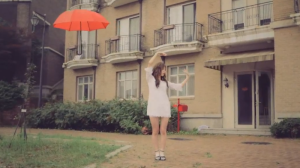 Additionally, the video’s color palette is heavily neutral and muted save for the lone red umbrella, which worked greatly with the relaxed vibe of the song. The vibrancy of the said red umbrella certainly helped it stand out and call attention, providing a splash of idealistic color that brightened up the rest of the video. Something else I appreciated with the aesthetics of the video was how the video got progressively brighter as it advanced, symbolic of the optimism that grew slowly and subtly in the song’s lyrics.

Overall, Lim Kim’s “Rain” was a very refreshing experience. The song was a pleasure to listen to, perfectly embodying the sentiments that come along with a rainy day. It’s relaxing and lofty, and the same can be said for its accompanying video, which complements it in almost all ways. All in all, “Rain” is a worthy addition to Lim Kim’s growing musical repertoire, and I certainly hope to hear more pieces like this in the up and coming artist’s future discography.

Conclusively, Lim Kim’s “Rain” gets a 4/5 from me. Readers, what did you think of Lim Kim’s pre-release track?