Within a week of learning about Lim Kim‘s impending comeback, the female half of Togeworl (Two Months) has dropped the single “Stay Ever,” ahead of the release of a mini-album in January. “Stay Ever,” featuring rapper Verbal Jint, cound be considered another entry in the catalogue of lounge music, with its languid pace.

“Stay Ever” begins softly, Lim Kim almost whispering the opening lines as the MV’s heroine checks into a hotel. She goes through the motions of gazing out her room window, taking a dip in the pool, getting dressed for dinner; all with the same expression of ennui decorating her face. As she walks down the corridor, the beat kicks in — and so does the intrigue.

Attempting to be inconspicuous in a trench coat, sunglasses and a book inside a dimly lit room, the woman spots a man and follows him, to nonchalantly spike his glass. Later in the MV, we see the man collapsed at the table, having been poisoned — that wasn’t Berocca she was dropping into his glass. We see her put a similar — or even the same — tablet in her mouth while in the bathroom, though it is not readily apparent when exactly in the timeline of events this occurs.

The entire MV is presented in an anachronological order. The earlier scene in the hotel room actually takes place the morning after our assassin’s one night stand (who isn’t the target, a bearded and bespectacled man at 1:18). The blouse she wore in the bar with him is clumsily draped over a chair, and she’s wearing the black skirt she leaves the hotel in, before sinking to the ground outside. Beyond that, the order of scenes in the MV is up for debate.

My version of events would be: the woman arrives at the hotel some time before her mark. She bides her time by attempting to unwind with a swim and some sex, but can’t bring herself to relax and be in the moment. Her task is likely weighing on her mind. The troubled look that flits across her face in the bar (at 2:10) and a lip bite (1:02) are the only times we get to see a glimpse of her inner conflict.

The shot of her taking that tablet in the bathroom (at 3:06) could even be indicative of her desire to escape her conflict through death, or at least by giving up her current vocation and lifestyle. Another explanation could be that the tablet in her mouth is the same one she uses to kill her mark, though I have to admit it is a stretch. Within the MV, that one cut is the one that makes the least sense to me. 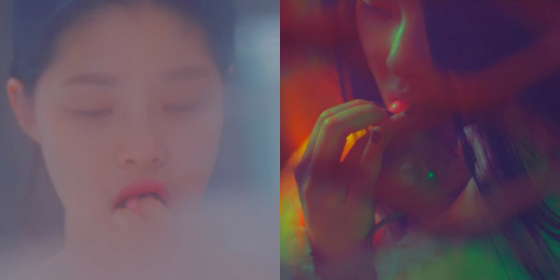 Despite how she personally feels though, the assassin goes through with the hit, spiking the mark’s glass before leaving the hotel. Later, she enters a den to collect her payment, in the same kind of white suitcase carried in and out of the hotel. the spherical, orange lolly she eats both while making the phone call and on her way to the hotel bar could indicate her decision to keep going and stay within her current life situation.

Whatever the narrative of this MV, it achieves its goal in making the song more engaging. Despite Lim Kim’s beautiful warble and the gorgeous R&B piano chords, “Stay Ever” is a tad too stagnant, even for lounge music. My face was a mirror of the assassin’s during the verses.The slowness matches her listless expression, but I would have truly lost interest in the song were it not for the MV itself. The percussion in the chorus saves the song for me. The way the MV matches these parts of the song with our protagonist confidently carrying out the job and collecting her payment was the icing on the cake.

In a song about wanting someone to stay with you forever, Verbal Jint’s verse gives voice to that someone; someone who questions the unequal nature of the relationship, but soon gives into what the other wants:

Will it spill over if I touch the full glass?
I try to picture inside my head, what if I
Your eyes seem coded, is it love
Or is it lust, where do you stand?
I see myself, a tiny dot on the map you created
What you want is what I want
If you like it better this way
Baby I could stay ever, ever, ever 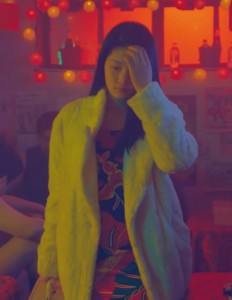 The rap doesn’t give any more insight into what we already know from Lim Kim’s lines, and only serves to reconfirm her desire for companionship that is unconditional, unquestioning and on her terms:

Seep into my air
I feel you stepping in
But that’s all
I like it better this way
Stay ever, stay ever
Oh, ever oh

There is a reluctance to give oneself over fully to the relationship, a dilemma of sorts that is visualised in the MV through the assassin’s inner turmoil. There’s a knowledge that what she is doing isn’t exactly right, but she ends up wanting it anyway.

But, even though I admire the honesty of the lyrics, “Stay Ever,” remains a slow, good, but not quite great, listen.