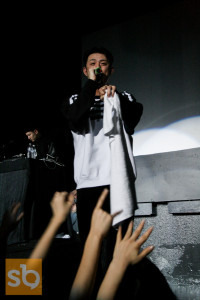 Beenzino made the second of his five stops on his North American Tour this past Saturday in San Francisco. On December 5, Seoulbeats received the opportunity to cover his concert at The Factory, an intimate club venue located right under the Bay Bridge. As relative novices to Beenzino and Korean hip hop in general; Mark, Lorenza, and Sarah were quite blown away by what they experienced. Read their thoughts below and, if you can, check out the remaining stops of the tour in New York and Boston.

Mark: I knew very little about Beenzino going into the concert so my expectations weren’t very high. It was also my first hip hop concert so I really didn’t know what to expect going in. With that said, I really enjoyed it! I was pleasantly surprised at how simple the stage and setup was: one stage, one spotlight, a DJ, and the man with the mic. That’s all it takes to have a good show as long as the person in the spotlight knew how to hype up the crowd, and that he did.

The entire show was over two hours long and Beenzino performed with high energy throughout the whole thing, without even once going backstage for a break. He did step out for a few minutes for the encore and then he came back and performed for another half hour! Are hip hop encores usually this long?

I can’t speak to how well he performed his music because I wasn’t too familiar with it going in but I was definitely tempted to check out his discography afterwards. What did everyone think of the set list and the way his music translated to a live stage?

Lorenza: I knew a bit about Beenzino before going to the concert. I had first heard of him from 1llionaire‘s appearance on Infinite Challenge and the collaboration he did with Zion. T. His flow and style are more unique than many Korean rappers which made me even more interested to find out more.

I had been looking forward to his concert all week, so I would say my expectations were high. Any trepidations I had about the venue and whether or not it would work for Beenzino, vanished once I arrived. I loved that the venue and stage set up was so intimate and simple. He really made an effort to engage with the crowd, joking with his DJ and the audience. While I couldn’t understand everything he said in Korean, you could tell he really did want to make sure everyone was having a great time. 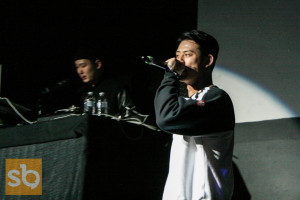 His energy and talent translated really well from the recordings to his live performance. This was my first Korean hip hop concert and Beenzino did not disappoint. Like Mark said, he performed for over two hours with maybe a five minute break before coming back and performing an insane encore. He performed pretty much his whole discography, with his encore being what seemed like a medley of a few of his most popular features and a few of his newer songs.

Overall, Beenzino lived up to my expectations and I would encourage anyone who is even mildly interested in his music to definitely go.

Sarah: I had only listened to a few of his songs and watched a couple music videos before going to the concert, but I very much enjoyed what I had heard so I was quite optimistic going in. I was surprised by how intimate the venue was, just a bar and one small room with a stage on the side. The atmosphere that created was spectacular though. Beenzino is a top notch crowd-player. He performed what certainly felt like his whole discography, but broke it up with chats with the audience, playing with his DJ and, especially since he turned every song up in energy and intensity, he had the entire crowd in the palm of his hand the whole time. I didn’t even realize it had been almost two and a half hours by the time he finally wrapped up. The only sign he ever showed of being tired was slowly ridding himself of layers of clothes, and the sweat he had to keep wiping off his forehead.

A large part of the audience was Korean and spoke Korean, which was clearly something he was expecting as he mostly used Korean to talk to the crowd. Despite not actually knowing what he was saying, it was easy to tell he had a great banter going based on the crowd’s reactions. He asked multiple times what our favorite songs were, what we wanted to hear, and reciprocated by performing them (most of them, that is). I did feel a bit out of place in that way, since everyone else there seemed to know all of his songs. Even so, it was very easy to get incredibly pumped up and dance and sing along when I could. 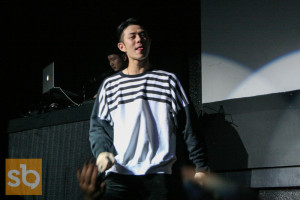 He took a short break at one point and asked the DJ to freestyle, to which the crowd responded by screaming for a freestyle rap. Beenzino responded in Korean, but the calls didn’t stop, so he frustratedly threw back in English, “I told you I’m not gonna freestyle right now!” Throughout the whole night, it definitely felt as if he was communicating directly with everyone in the audience.

My favorite part was just how easily he got everyone excited and how easy it was to dance along and get completely lost in his rapping. I would highly recommend going to see him if you can, especially in an intimate venue like we had. Slight negatives were the lighting, which didn’t really add anything to the music or performance, and in fact took away from it when the spotlight decided to get confused a of couple times. But there was really nothing bad about the entire performance.

Mark: I too thought the lighting was a bit bland but I think for such a small stage and this type of performance, it worked. Plus, the consistent lighting made it ideal for taking photos. The venue itself was a club/lounge with a dance floor which was converted into the concert area by adding a stage. Such a makeshift setting made for some odd viewing as there were pillars which got in the way at critical angles including three in the front of the stage VIP area, one of which was dead center and only a couple of feet from the stage. I’m sure it must have caused some discomfort for Beenzino to stare out and see a pillar divide the middle of his audience. A better venue would have done the show greater justice but I think the production team made the most out of what they were given. 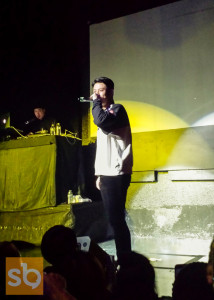 Other than that, I really enjoyed how much the crowd got into it. As mentioned, the crowd seemed to consist of a lot of Koreans in their 20s which made for a youthful vibe, but not too young where you wondered whether or not any of them should be allowed inside the 21+ venue. I think it was a good idea to make the event 21+ so that alcohol can be freely consumed among concertgoers without those annoying wristbands. There were a good mix of guys which I’m always happy to see at a Korean concert though female attendees were most definitely in the majority. There may have been a few boyfriends that seemed like they got dragged along but there were also many guys who were most definitely into it. Let’s just say a few elbows were thrown and some shoes were trampled on unintentionally.

Sarah: I was pleasantly surprised by the number of guys in attendance as well, even if it meant getting a few of those elbows in my side. It was a nice change over the vast majority of ladies I’m used to in anything regarding K-pop. Clearly the hip hop angle is more popular among men. There were two in particular who were having the most fun possible right in front of me, dancing their asses off and laughing lightheartedly at the screaming women behind them.

I hope Beenzino was entertained by the guys in the audience as well, and that the awkward pillars weren’t too distracting. It did feel a bit like it split the room down the middle, but Beenzino did a great job of playing to and connecting with both sides of the crowd.