F.T Island Reflects on the Past with 'Thanks To' 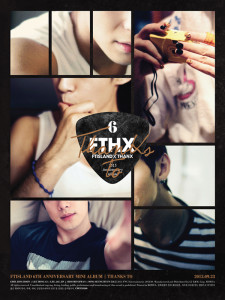 The idol band is perhaps one of the hardest schemes to pigeonhole in the idol-artist debate because of the members’ large contributions to their material. This is in combination with the manufactured aspect of their companies having a heavy hand in their image and marketing, just like typical idol groups. This balance is probably what makes the idol band so appealing, as it strikes the fancies of adolescent idol fangirls and fanboys as well as the general public, which tends to look the other when it comes to idols.

Following that train of thought, the influx of so many idol bands to the market makes a little more sense. Regardless of the amount of growth in that corner of the market, there will always be certain groups that come to mind as the pioneers of the model, and one of them is without a doubt F.T Island. With their angsty rock sound — as opposed to their labelmates CNBLUE who tend to favor a lighter sound — and lead vocalist Hongki at the microphone with his raw voice, F.T Island as a unit has distinguished themselves in the music scene for six years now.

In celebration of their six-year anniversary, the quintet has taken a break from their Japanese promotions to release a special mini-album as a thanks to their fans. Released on September 23, Thanks To comes as their first Korean release since their fourth studio album Five Treasure Box and the promotional single “I Wish” in September of last year, just over a year ago. On Thanks To, they take the time to reflect on love, life and the past with four new tracks.

The album opens with a literal look back to the past. “Memory,” the single off the special mini-album, addresses the hard reality of moving on after a relationship ends when there are regrets and scars that can’t be erased that easily. The music really emphasizes that pain in the verses in particular with a soft electric guitar against a lilting piano melody as Hongki bemoans the strength of his memory. The song swings back and forth between the sound of a mid-tempo rock ballad in the verses and a full angsty pop rock track in the chorus.

While it’s my least favorite track on the mini-album, it’s not at all a bad song and is actually a logical choice as a single because of its mass appeal. I just find the harder sound more appealing from them because it simply suits Hongki’s voice better. And while the opening makes for a wistful introduction, Seunghyun‘s raps that follow the verses are a bit jarring and just don’t work as well as they could, particularly the longer one that follows the first verse.

The music video is nothing more than a “behind-the-scenes”-esque cut. We see them doing everything from restringing guitars and preparing backstage before a performance to shaving and taking selcas. It’s cute and uses great cinematography, lots of soft focus, light and lovely cropping, though I can’t help but imagine what a full music video would have been like, something along the lines of “Severely” but less dramatic and more angst-ridden.

Continuing with the reflections on the past, “Falling Star” encourages us to search for our dreams and not get caught by what the world expects of us. While a bit repetitive, the track has a definite anthem feel to it musically. Starting out slow, it quickly speeds up with a heavy guitar line leading the way through the chorus. It’s the kind of song to play while working out or just driving down the road because it’s so energizing and uplifting.

But my favorite track has to be the heavier “Try Again.” With its driving guitar and more prominent bass, it definitely has the hardest sound on the album, and matching that sound perfectly is Hongki’s voice at its rawest. A great thematic echo of the promotional single “Memory,” the song goes back and reminds us that even though there are things that seem to hold us back, we have to keep trying and pushing forth to get past it. 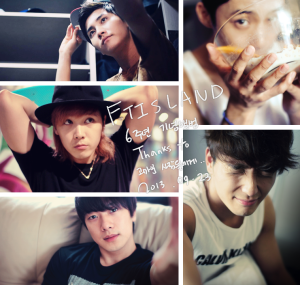 The album slows down and concludes with “Always With You.” With its back and forth song pattern as well as its constant switching between slower verses and a more upbeat chorus, the song makes for a more musical echo of “Memory.” It even features a touch of piano at the hook. Ending on a high note, the track is an ode to love and its longevity. It’s a promise to fans that F.T Island has been here for six years and will continue to always be there.

In their sixth year, F.T Island has secured a strong hold on the music market and a loyal fanbase. As such, they’ve used Thanks To to celebrate that. The result is a cohesive album, with elements of similarity sprinkled throughout to hold it together without watering it down and making the whole mini-album sound the same. Instead of that, we get a lovely reminder of the variations within their signature style paired with musings on the past and the future.