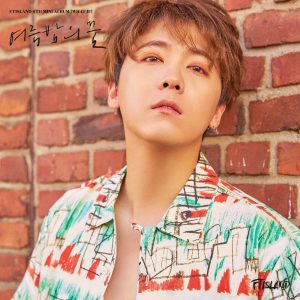 The boys of FT Island have always shown great inclination towards trying a new genre of sound and evolving their concept. The band’s last full-length album, Where’s The Truth, solidified their rock band title and showcased the group’s maturity and mastery of their instruments. For their latest comeback, FT Island have returned during the hot summer season with “Summer Night’s Dream.” Different from the hard-hitting rock sound listeners have been accustomed to, the band’s new track is adequately performed to flow steadily with the tranquil but fun vibe of summer.

Sonically, “Summer Night’s Dream” is a sweet love song that opens with a slow acoustic guitar riff and progresses to an upbeat pop-rock melody with the addition of the bass and drums. Lead singer Hongki is able to deliver a playful vocal performance, foregoing his staple raspy voice for a more soothing tone. When the chorus hits right after Seunghyun‘s rap breakdown, the song enters its bright climax with the full pop-rock euphony. The chorus is quite resemblant of production from Day6, who have been making headlines with their force of experimentation within the pop-rock genre.

The playful tone of “Summer Night’s Dream” is fully visualized in the accompanying music video that roams between the concept of fantasy and reality. Hongki plays the main role as a starstruck mascot who experiences love at first sight after a brief encounter with another mascot on the street. After a quick transition, the music starts playing and we find the members dressed in their best attire surrounded by flowers and brightened by the sunrays of the outside light. Hongki becomes oblivious to those around him as he enters a dreamlike state imagining scenarios with his new summer crush. 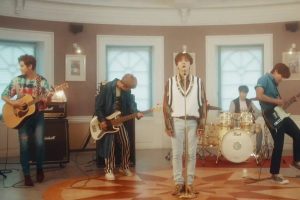 The video is clever in adding a bit of quirkiness and clumsiness to Hongki’s dreams, to symbolize the innocent but false reality of hope Hongki has in finding and being with his mystery girl. The rest of the band members seem to make a cameo within his dreams. They rock out with their instruments in a colorful house party setting, and play on stage with background dancers and Hongki’s mystery girl watching from the seats as the sole viewer. When the dream does conclude with the song, Hongki is awakened to a false reality where he encounters his crush once again, only to be awakened out of shock to the disappointing truth that his night of fun was just a dream.

“Summer Night’s Dream” also adds in a nice vocal performance from member Jaejin, which is a nice surprise for me. Lyrically, Jaejin delivers a narrative about re-encountering a lost love inside the timeless space of dreams. The lyrics are both simple yet with a touch of poeticness that fans have come to expect from a band now in their eleventh year together.

The moment I first saw you, it was like lightning struck
Just thinking about you makes my heart pound
My heart is getting fat, loneliness is a luxury
Waves crash in my heart

As more time passes, it seems that the members are more willing to present themselves in a different light, which is sonically paying off for FT Island. With the band’s Japanese career getting bigger year after year, their comeback with “Summer Night’s Dream” which fronts their EP, What If, is a satisfying taste of sound that fans haven’t heard since their last Korean release, Over 10 Years. FT Island certainly deserves more recognition than what they have been given, as they have constantly proved their worth, not only as musicians, but as lyricists who can rock the cool vibe even in the middle of summer.