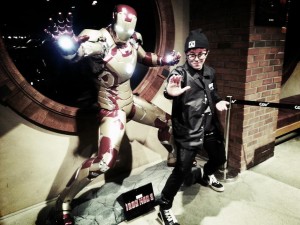 While no one in K-pop is flying around saving the world, correlations between superheroes and idols are apparent. Firstly, for better or worse, both represent an ideal in their cultures. Secondly, both parties regularly don ridiculous outfits. Finally, both exhibit the superhuman ability to go without sleep. Plus, K-pop stars love superheroes and villains, so why not make the leap? I know we’ve got some comic fans out there.

Out of the American superhero pool, Marvel’s Iron Man might be the most appropriate comparison to K-pop idols. While the current Iron Man 3 movie provides an excuse to focus on Tony Stark, his character development in the larger Marvel Universe surprisingly works in dialogue with K-pop. Although Stark possesses qualities that no idol has — super-genius intellect, heightened combat prowess, rockin’ goatee — his contentious relationship with the industry that made him, multi-faceted character, and plethora of iron suits make him the perfect superhero soulmate for K-pop.

Before delving into the perfect idol parallel, there are some general traits that would make Stark any K-pop idol’s best friend. The biggest is his involvement in an industry that pulls into question his own autonomy. Long before the movies, Tony Stark first appeared in the Marvel Universe as a symbol of American capitalism. He owned Stark Industries, a company that developed weapons technology. After getting kidnapped in a warzone, Stark made the metal suit and became Iron Man.

In the way that the military industry enabled Stark to become Iron Man, an idol’s image is almost completely designed by the entertainment industry. While there are “self-made idols,” and while Stark is often called the “self-made superhero,” both are still entrenched in larger organizations. Throughout Iron Man‘s tenure, Stark has been involved in numerous government organizations, much like how idols are simultaneously affiliated with their group, entertainment company, the K-pop machine and South Korean capitalism. Both so strongly symbolize their respective industries that it’s difficult to break away from them, making for a delicious duality in character that we can analyze to bits. 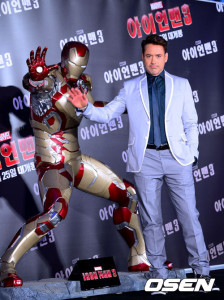 In another parallel, it’s a K-pop thing for artists to comeback with different images to show different sides of their personality. Iron Man has had enough “comebacks” and suit changes to rival B.A.P, and different writers enhance different aspects of his character without altering his core image. Sound familiar? For example, movie Tony Stark is glib and eccentric, whereas classic comic Tony Stark is more business-driven and a serious addict, yet they both are Iron Man. This can be true for other superhero comparisons, but it’s harder to get away from the origin of someone like Batman who has one very strong event dominating his story. In terms of representation, both K-pop idols and Iron Man show a malleable image that is a large part of their overall narratives.

Finally, we cannot forget how darn human Tony Stark is. He’s not an alien and he’s not biologically enhanced — at least, not at first. The darker side of Stark is that he has vices, gets depressed, and often comes off as a jerk. However, he is a superhero, so we as an audience want to empathize with him rather than criticize him. K-pop idols also live in that similar in-between space of being human and perfect at the same time. How many of our favs have put their foot in their mouths? How many times have we clapped when our idols display their humanness? One of things that makes Tony Stark and K-pop idols beloved is their humanity, even if sometimes you want to smack them.

Iron Man‘s overall symbolism is so apropos to K-pop, it’s no surprise that idols latch onto any Iron Man statue they see. The real question is: Who’s the Iron Man of the K-popverse?

The one idol that encompasses Iron Man in a 360-degree way is G-Dragon. A YG-er practically since birth, G-Dragon knows what it means to be of an industry. He’s business conscious and the way he takes charge of his brand is reminiscent of old-school Stark Industries Tony Stark. However, he also exhibits an awareness of his ties to the K-pop industry in the same way Stark does. In an XXL interview, G-Dragon voiced concern for how K-pop might affect his future artistry: “This K-pop title might be good for now, but looking ahead it could hold me back, like a prison of sort. I’m a little wary about that.”

Similarly, in Iron Man Vol. 4 #7: “Think about it, Nick [Fury]. What if war was obsolete? What if terrorism and crime, famine and disease were obsolete? Where would we be?” Stark is talking about possible world peace, but the question “Where would we be?” implies how tied he and Fury are to the industry of war.

Another Iron Man-like trait of G-Dragon is his constant changing of his image, similar to Stark’s constant enhancing of his suit. GD’s known for his fashion, but his choices are more about creating a persona for his music. He tinkers with his outfits, bordering on obsessive engineer, and they’ve become an important vehicle for his job, like Stark’s suits enable him to have different abilities. The upgrading for both illustrates creativity, eccentricity and the more autonomous part of their lives. Much like how Stark has done some extreme things for that suit, G-Dragon has also plumbed the depths of weird and wacky clothing to a questionable degree for his image.

Lastly, as we all know, sometimes these traits make GD look like a jerk too, but we know there’s a heart of gold under there. 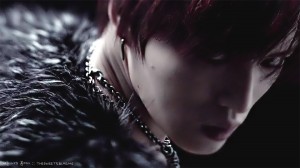 If we look at Tony Stark’s widely-known movie incarnation, JYJ‘s Jaejoong relates to the Robert Downey Jr. characterization. Though Stark in the movies is still a businessman, he is also totally a 4D character. He’s a quirky engineer and he makes us laugh, yet he’s enigmatic and troubled, trapped by his Iron Man persona. He’s also more rebellious and rock-and-roll, partly due to the movie soundtracks showcasing that side of his character. Jaejoong’s recent solo release I hits upon all those qualities. Jaejoong has a long history in K-pop and he’s known for his silly, 4D character. However, in his solo album, his composing shows off his tinkering-creative side, there is a strong rock vibe, and the prevalent “trapped” imagery in the “Mine” MV is eerily similar to movie Tony Stark’s character progression. The RDJ Iron Man starts off as a flippant playboy, but as the trilogy progresses we see his layers and darker side, much like what Jaejoong has done with his solo release.

Jaejoong’s past decisive actions show his issues with the K-pop industry, and similarly Tony Stark in the movies is quicker to cut ties with weapons technology than in the comics. Jaejoong is still a part of K-pop overall, much like how Stark in the movies is still a part of The Avengers (and by extension S.H.I.E.L.D.), yet it’s clear from Jaejoong’s album that his solo effort is an image that he created, pushing the boundaries of “pop” as Stark pushes the boundaries of “superhero.”

I also wouldn’t want to ignore the fact that Jaejoong’s nickname is “Hero,” but now we’re just getting silly. 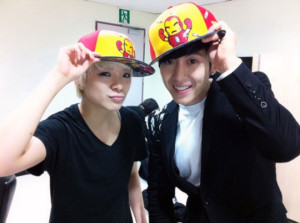 What is that sound? Oh yes, it’s the groans of all classic Iron Man fans everywhere. In one last fun parallel, The Avengers movie definitely brought OTPs into Iron Man fandom, to which K-pop is no stranger. In fact, this is the one area where K-pop has more longevity than the Iron Man franchise. How can one compare Tony Stark and Bruce Banner’s blossoming bromance to GD and Taeyang’s forever friendship, or Jaejoong’s with Kim Hyun-joong? (Though didn’t Stark inviting Banner to Stark Tower remind us all how Jaejoong and Hyun-joong lived together?) However, OTPs are in the Iron Man fandom now, and only time will tell which K-pop friendship the Stark/Banner one will mirror.

There are so many layers to this character. Comic fans, come at me. Who’s your K-pop Iron Man? Are there other superhero comparisons you’d like to see?