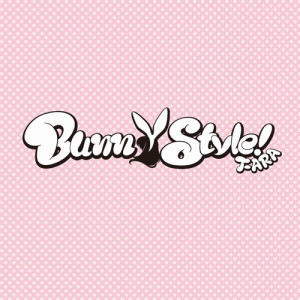 If I were to describe T-ara’s Japanese endeavors in one word, I’d describe it as lazy. I previously noted T-ara in a prior article as an example of what not to do when promoting overseas, and with much reason. While the group had a stellar start with the J-pop friendly “Bo Peep Bo Peep,” the group’s following efforts were heavily lacking and quite plainly, lazy.

A lack of effort would be one of the main reasons why T-ara’s Japanese endeavors have been regarded and remembered as being quite horrible. Since their Japanese debut in 2011, T-ara has produced only a handful of original Japanese songs. Instead, they’ve gone down the route of remaking all their previous singles, to distribute them in the bigger Japanese market. In hindsight, these remakes have paled immensely in comparison to their originals. The remakes have been productions of much lower quality, and they’ve been filmed under an apparently lower budget, leading to some questionable videos. More fundamentally however, the members’ Japanese has proven to require major work, for the members’ lack of linguistic skills have made for some unsavory live performances and slurred recorded tracks.

Now — still recovering from last year’s colossal controversy revolving around the termination of now-former member Hwayoung — T-ara is planning to head back to Japan to promote, this time with their first original Japanese single, “Bunny Style.” However, despite being the group’s first original track for promotion in Japan, “Bunny Style” is lacking in many departments, leading the expectancy of this (admittedly overdue) milestone of an original overseas track to sizzle anticlimactically. 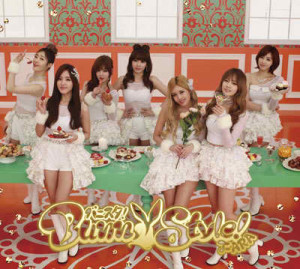 The song itself would have been more acceptable if it weren’t for its weak flow and progression. The track attempts to fuse a subtly sultry instrumental with J-pop’s signature energy, and the group’s excessive aegyo, to get some somewhat satisfactory results. The song opens with its admittedly addicting and cutesy hook before swiftly transitioning to its verses. The verses themselves are actually quite a treat. While they’re laden with the sing-talking that’s been plaguing the industry, the verses carry a sultry sound that presents a refreshing change of pace for the track. However, the highlight of the song would surely be its energetic chorus rightfully led by the group’s strongest vocalists, Eunjung, Soyeon, and Hyomin. The chorus’s peppy sound is not only likable but it also caters to J-pop’s sound fairly well.

However, while its core parts seem satisfactory, I still have multiple issues with the song; my main gripe is with the interruptions in the song’s flow. The song’s progression starts off well, with a memorable pre-chorus succeeding the verses. However, following the chorus itself, we’re introduced to a mini dance segment that is not only disturbing with its cute-sexy feel, but is also disruptive to the built-up energy from before. Moreover, Ahreum’s rap, following the second chorus, comes off sounding forced and out of place when placed in the context of the rest of the song. In addition, the dance segment preceding the (overly climactic) bridge seems completely out of place and exceedingly uncomfortable. 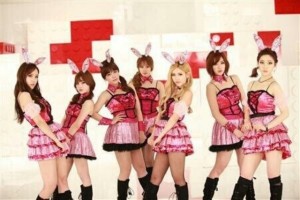 “Bunny Style” obviously tries to follow T-ara’s tried-and-true pattern, set by previous successful tracks “Bo Peep Bo Peep,” “Lovey Dovey,” “Roly Poly,” and “Sexy Love.” The similarities are blatant, for the song carries the same high-pitched vocals, repetitive sound, and heavy reliance to a central hook. However, “Bunny Style” hasn’t been able to match up to previous successes, and this is probably due to the overly saccharine feel of the concept and the relatively weak progression of the song.

While all of the previous tracks can count as cutesy and aegyo-filled, they still had a sassier and/or more mature undertone, something that T-ara has been more suited too. In that aspect, “Bunny Style” feels too excessive and over-the-top, making the effort forced and uncomfortable; its sound is not nearly as addicting as what we’ve come to expect from T-ara, as its satisfactory hook is well, just that.

Unfortunately, the song’s accompanying music video doesn’t get any better. As the cutesy song title may imply, the music video is also excessively cute and childish, being centered on what else but bunnies. The concept feels completely inappropriate for the group, and it seems like the video is not only disturbing — with its jailbait-like feel — it’s also desperate. While the little bunny storyline may’ve been somewhat amusing, the overall use of something as gimmicky as bunnies appears unnatural, cheap, and a last resort to get any attention for the group. 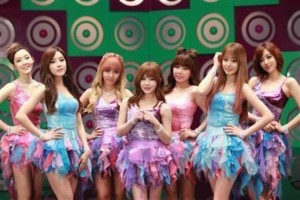 Furthermore, this overly cute and childish concept proves its incompatibility with T-ara’s aging members. The majority of the group are grown adults, and to see them acting all child-like and babyish, seems overtly disturbing. While they aren’t the oldest members, Eunjung, Soyeon, and Hyomin carry a much more mature aura around them, and consequently, they come into it looking most out of place. Soyeon’s evidently uncomfortable in the entire video, and Hyomin and Eunjung , while more receptive towards the cuter concept, appear out of place and alien to the style. Maknaes Jiyeon and Ahreum, look ill-suited to the overly childish concept, but surprisingly, the eldest members Boram and Qri seem best-suited to the concept. Carrying a youthful aura and younger appearance, the concept, while inappropriate to majority of T-ara’s members, has an upside in its portrayal of the two oft-overlooked ladies.

Like in the aforementioned, “Bunny Style’s” video has been deemed somewhat a washout, but to pick at its faults, one would have to pinpoint its overall aesthetic; the theme and style have been excessive and lacking in subtlety and tact (in delivery). Obviously a cutesy video, the color scheme is dominated by pastels, but the resulting association to this is that of a cheap and overly cute clip. The two sets used for the dance sequences seem plain and nondescript, and while the dining room set is more acceptable, the orange and pale green color palette clash heavily with the girls’ white clothing. Moreover, the lego backgrounds for the girls’ solo shots feel unnecessary and confusing under the context of the rest of the video. The best thing about the MV would probably be the little bunny storyline. The rowboats are a cute addition, and the scenes of the girls chasing the bunny are fairly likable as well. 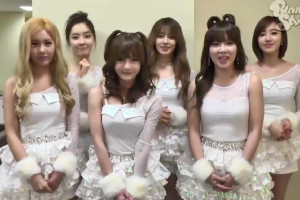 Coming down even harder in my critique, the styling of the video hasn’t added many positive vibes. The outfits worn in the green and purple set appear unflattering and childish, but a consolation comes in the white ensembles in the dining room scene; a forgiving factor but still slightly overwhelming in appearance. The worst of the outfits in this video is definitely the inappropriate bunny costumes donned by the girls in their solo shots and the second dance set. The costumes are off-putting, unflattering, and quite frankly, disturbing. Who’s with me when I say they deserve to be thrown in the fire?

I’m admittedly very tolerant of aegyo myself, however, I really despise the cute-sexy concepts certain groups try to sell. This concept fits snugly under the disturbing cute-sexy category, not only with its inappropriate outfits and ambiance, but with its choreography as well. For the most part, the choreography is innocuous; T-ara’s signature dance hooks are there and the choreography is simple, gesture oriented, and easy to follow. However, there have been clear moments where the choreography is simply stretching way to far into the ‘sexy’ to constitute as ‘cutesy’. The dance breaks, with butt-focused shots filling its post-chorus sequences, is also particularly improper. 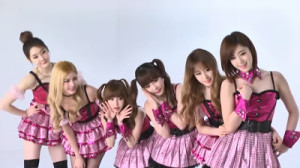 Additionally, despite the energy of the song, the members look completely devoid of life. The members lack the charisma needed to even pull the song off, and their impossible schedules — courtesy of everybody’s favorite company Core Contents Media — would undoubtedly be the cause of this.

In conclusion, fans of T-ara, including myself, were awaiting their first original single to gauge what potential the group has retained in the much bigger market. The group started out really well in Japan with “Bo Peep Bo Peep,” but has been spiraling down quality-wise overseas. Most unfortunately, “Bunny Style” fails to redeem them. While the track has its moments, it’s way too inappropriate and excessive, and T-ara has clearly done much better.

Ultimately, T-ara’s “Bunny Style” gets a disappointing 1.9/5 from me. But readers, what are your thoughts? Did you find “Bunny Style” as off-putting as I did? Feel free to share your opinions below.