After three comebacks in 2012, Teen Top is back with their first single of 2013. Though I’m a Teen Top fan, I can honestly say I wasn’t that big on their releases from last year – “To You” was pretty great, but “Crazy” and “Be Ma Girl” felt mindlessly generic, especially when compared to the explosively catchy “No More Perfume On You”. But knowing Teen Top is capable of cranking out some pretty good songs, I’m really looking forward to the release of their first full-length album on February 22nd, and thus I got pretty excited when they pre-released their new single and music video “I Wanna Love” this week.

And then I watched it.

The good news? Well first, the line distribution. We’ve come a long way from the Niel and Chunji show that was “No More Perfume On You”, and Ricky and Changjo actually have multiple lines and scenes! And speaking of Changjo, this video definitely highlights his coming of age, as this tall, suave guy is a far cry from the adorable boy in “Supa Luv” who had the most pinchable cheeks ever. But he’s still only 17, so go ahead and rage over how unfair puberty is.

And the best part of the music video had to be the cinematography. After the visual overload that was “Be Ma Girl”–with its super bright colors, glow-in-the-dark scenes, and shaky camera holding–the more desaturated color scheme was very soothing and gave the music video a more mature feel like “To You” did. It even made their garish outfits (is L.Joe really wearing cheetah print under a varsity jacket?) less noticeable and offensive to the eyes, which is always a plus. I loved the variety in the filming as well – instead of just relying on your typical close-ups on the members, there was a lot of experimentation in angles, depth of field and focus that created some gorgeous shots of the boys in Hong Kong. 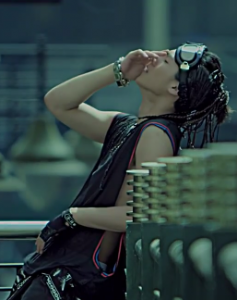 But in the end, that’s all the music video is – a series of shots that had no real direction, leaving me wondering what on earth is going on half the time. Why are they saying “I Love You?” Why is C.A.P punching air? Why is Niel dancing alone? What on earth is on C.A.P’s head? I’m aware that K-pop videos don’t always need a storyline, but if you’re going to attempt to convey something through a music video, make it a bit more obvious. Or at the very least throw in some standard choreography to distract me from the lack of plot, and this music video didn’t even have that. No body-rolling, none of their signature crotch-focused dance moves, nothing. The lack of choreography was probably the music video’s attempt at being more artistic like Big Bang’s “Blue”, but such an attempt fell flat among all the typical boyband corniness of exaggerated lip-syncing (especially in the “It’s time to move on, here we go Teen Top” parts) and even more exaggerated expressions of emotion–I’m sorry, but I will never be able to take Chunji gorging on canned pineapple seriously.

All in all, the music video was a pretty basic attempt at a more mature/artsy look that in reality produced nothing more than an angsty Teen Top wandering around a really pretty Hong Kong. And while that looked nice, without any sort of development or climax, the music video ended up being really static and underwhelming, which is kind of how I feel about the song as well. Thus, I’d give the video a 2.7/5, and am really hoping that the album as well as other future Teen Top releases will have something better in store.