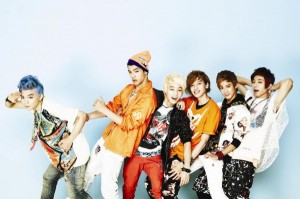 Teen Top has returned with a new single for the summer, “Be Ma Girl.” This is the third comeback of the year for the group, and the first song I was genuinely anticipating from them. Despite debuting around the same time as I got into K-pop, I never paid much attention to Teen Top–much too busy fangirling over a little group called Big Bang.  My attention was drawn to them not because of a song, but because of C.A.P‘s controversy surrounding his double standards in rearing sons and daughters. To make matters worse, their first MV and song I listened to and watched was “No Perfume On You,” which was a blatant promotion of infidelity–not the greatest song in their discography to gain them any potential female fans. Despite having a bad introduction to the group, I decided to give their third mini-album, aRtisT, a shot and was pleased with the sound of it–even if I avoided the MV like the plague.

Teen Top is one of those borderline mid-tier groups, groups that have a solid fan base, but still haven’t managed to capture mainstream attention. They have still managed to cling on, thanks to their loyal and dedicated fanbase, that have stuck by the boys, controversies be damned. Although this is just a summer single, hopefully Teen Top can keep up with the decent-sounding singles–I adored “To You”–and gain some momentum before their next promotional period.

As this track is tagged as a summer single, I expected this song and MV to be some good mindless fun. And it was, sort of. As much as it would’ve been nice to see the boys taking advantage of the summer scenery, a dance party at a bowling alley and some coloured rooms definitely fit the mindless fun bill, as tired as this plotline is. The boys seem to be having a good time dancing around with each other in their aforementioned coloured rooms, and with other friends in a neon, glow in the dark party that reminded me a lot of B.A.P’s “Power” teasers. The MV centres around Teen Top hanging around a pool hall and stumbling upon a pack of girls, with whom they proceed to court and take out to a bowling alley, where many neon, glow-in-the-dark shenanigans occur.

It’s a summer MV for a club-sounding song and it looks like the boys are having a good time, but there are way too many things that are distracting in the MV to the

point of it being a nuisance. There is nothing wrong with the coloured rooms as tired as they are–the bull’s eye room reminded me of SNSD‘s PV for the Japanese version of “Genie” and the holes on the wall of the yellow room were odd–but the camera work was terrible. The shots in the coloured rooms  were really shaky, which is all right the first time, but shaky cam for the umpteenth time is just plain annoying.

Speaking of annoying, what was going on with Chunji‘s face? I like man-aegyo as much as the next flower boy lover, but it just looked like he was having a muscle spasm. The choreography didn’t help matters either, with it being a hodgepodge of standard K-pop boy band moves, like the crotch-grab and lip-biting, which just looked like they needed to go to the bathroom in my opinion and the sideways running man reminded me of the choreography from ZE:A‘s “Aftermath.” As a whole, the choreography was well-executed, with the expection of Chunji and his spasms, but underwhelming. The song is nothing to flip a table over for, but has some nice beats and synths and very club lite, although some parts are way too heavily auto-tuned.

All in all, “Be Ma Girl” is a fun little song to dance around to and it’s not too fast-paced allowing for the laidback choreography. It’s a catchy enough song that can tide their fans, known as ‘Angels,’ over until their next promotional period–the MV has enough close-up shots and crotch grabs to set their hearts a-flutter. Being a non-Angel, I was a little disappointed, seeing as much as I liked “To You” and the rest of aRisT, but since this isn’t a legitmate promotional period, and the single is pretty darn catchy, I’ll save my energy and excitement for their next album.