DASONI's "Good Bye:" an Introduction to an Excellent Sub-Unit

Thus far, 2013 has been the year of the duo subunits with Sistar19’s lastest single receiving an all-kill last week and continuing chart performance by 2Yoon‘s “24/7.”  Yet DASONI, the newest sub-unit from Shinsadong Tiger-backed EXID, still manages to holds their own with their debut single “Good Bye.”  Vocal powerhouse and ex-2NB member Solji combines with stunning beauty Hani in a soaring Davichi-esque effort that left me wanting more. 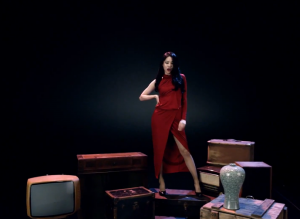 Debut single “Good Bye” combines raw emotion, soaring vocals and a simple beat-driven instrumentation for a winning effort. Normally, I’m not a fan of mid-tempo ballads, which tend to lack both the visceral connection of an up-tempo dance hit and the emotional core of more classically arranged constructions.  Yet, here the rhythmic beat provides balance to what could otherwise be sprawling vocals.  After opening with chords right out of “Call me Maybe,” the song features Solji’s unique voice conveying pained longing, conveying the song’s theme in a few words. At her best, Solji is adept at conveying layers of emotional complexity with her singing, and that comes across at several points here. However, while I expected Solji to excel (and she absolutely does), Hani really impressed me by holding her own opposite such a strong performer.  She sings the first two lines of the last chorus with an ethereal sentimentality that contrasts well with Solji’s sultry vocalizations.  The song does share similarities with EXID’s earlier work, most notably “Whoz That Girl,” but manages to evoke a subtler feel that sets the release apart. 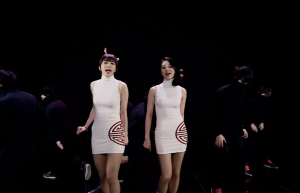 Conceptually, “Good Bye” also has a lot in common with Sistar19’s recent release.  Both videos attempt to artistically interpret the end of a relationship, though here the members’ singing made the decision to break things off. As described by the song’s lyrics, Hani and Solji feel that the relationship is too carnally-motivated and, though conflicted, have decided that breaking up is for the best. While describing this, the duo flaunt their sexuality, almost taunting the man in question.  Their hyper-sexualized presentation seems ironic, given their stated reasons for ending the relationship, but ultimately it serves to heighten the internal conflict described by the song.

To interpret this emotion, the producers set the video in a Chinese tea ceremony as imagined by a 1930s film noir. The use of Asian imagery that is also highly sexualized — an overflowing tea cup, sexually suggestive poses behind a silk screen, a cadre of dancers whose fans flutter with the duo’s hand motions — evokes some mild racial stereotypes of the erotic exotic.  Certainly the video does nothing to challenge the Pan-Asian sexuality motifs plaguing some of the earliest noir films. However, the MV manages to stay mostly on the side of tasteful homage, and you have to look hard to find things to be truly offended by. 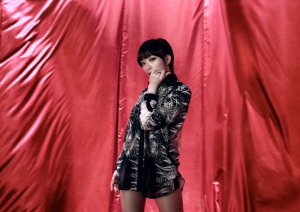 “Common Words” the coupling track for this single, is a piano-backed song whose minimal instrumentation allows listeners to focus on the vocals.  During the middle-eights, Solji and Hani belt out the lyrics in harmony, before returning to the soft vocals that defined the rest of the song.  The duo displays some symphonic subtlety, but this track is definitely more of a slow burn than an instant hit.

As of right now, the single has not performed well on the charts, despite several impressive performances on music shows. Hopefully the producers will give DASONI at least one more chance to demonstrate that they can be a commercial success. “Good Bye” shows vocal sophistication well beyond the reaches of the average rookie duo, and is easily one of my favorite songs of 2013.