So apparently there’s this dance called the Harlem Shake, I don’t know if you’ve heard of it? But luckily miss A‘s Min teamed up with 2AM‘s Jo Kwon, f(x)‘s Amber and others to show us what the fuss is all about. 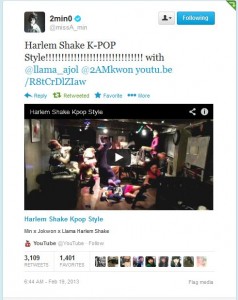 Barely a month old, the “Harlem Shake” has become the newest internet fad after a video of a bunch of Australian guys dancing to Baauer‘s “Harlem Shake.” And despite their dance not resembling the real Harlem Shake (I’m blaming geography here — I’m pretty sure most Australians don’t even know where Harlem is — it nevertheless managed to go viral and inspire a global trend. And we know K-pop loves nothing more than a good trend, so it was only a matter of time before something like the video above happened.

But this isn’t just another addition to the trend, no, Min’s got plans to use the “Harlem Shake” as a launchpad for her own career. She has so far tweeted a link to the video three times, retweeted reportage surrounding her video (expect this article to turn up on her twitter feed soon as well) and even started her own hashtag (#2min0harlemshake, for anyone interested).

It’s pretty obvious that Min is gunning for a slice of that viral fame cake… and I think it’s really cute, if not absolutely vital. With AQ Entertainment often slow to pick up the slack when it comes to managing miss A, it seems that Min is taking matters into her own hands.

What do you think, readers? Are you going to help Min out with her quest for internet fame, or just watch events unfold from the sidelines? And what are your thoughts on the Harlem Shake?