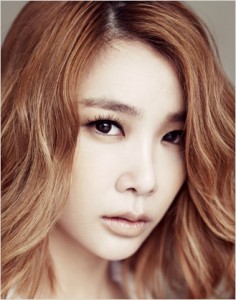 The Brown Eyed Girls‘ leader JeA, after many a rumor of a solo debut, has finally done it this January. Her solo debut mini-album is entitled Just JeA, consisting of five tracks with a few featuring artists. Her title track is “While You’re Sleeping.” She’s the last of the group’s ladies to go solo, and it’s about time. The album is meant to showcase JeA, not as a member of the Brown Eyed Girls, but as a producer and strong vocalist in her own right.

The first song off the album is JeA’s work with Eric Benét: “Days & Nights.” This was a particularly curious collaboration. Would JeA be singing in English? Or how about Eric Benét in Korean? Turns out there’s a mix of both. The majority of the parts sung together are in English, but there’s a phrase or two in Korean. JeA’s solo parts are mostly in Korean while Benét’s are in English. The pair’s voices go well together, both putting in restrained emotion accompanied by an abundance of vibrato. JeA’s voice lends a delicate touch that grows stronger near the end, and Benét’s give the song the right groove. The acoustic guitar in particular helps create a sultry and slightly sorrowful mood in the song, reflecting the memories of a passionate meeting of a past that is over.

Second is “Street Cat.” The acoustic guitar is back, and it brought some whistles along. The song wonderfully emulates the movements of a cat with the beat. JeA’s voice creates the feeling of just creeping along, like a cat confident on the street. The lyrics are honestly a joy to read. Most of the song takes the confident side of the speaker, only changing about two-thirds of the way in to show brief vulnerability stemming from past hurt that in turn led to the strength they have now. Though literally speaking as a cat, it’s apparent that the theme and sentiments can also be applied to a human. This is my favorite of the mini. 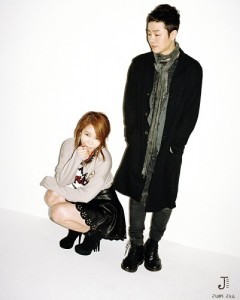 The third song is the mini-album’s title track: “While You’re Sleeping.” The track sounds fit for a musical solo where the woman’s crush loves another, inciting a change in feelings from the hardship of unrequited love. The instrumental is full with electric guitar and piano alongside strings and backing vocalists to truly make that impression on the listener. The song does a great job of showing off JeA’s vocal abilities from her range to emotion infused in the vocals. Overall, it’s a solid track to promote, though it seems tiring to perform repeatedly.

Fourth is the pre-released track, “Let’s Hug,” featuring Jung Yeop of Brown Eyed Soul. It’s the slowest track of the mini-album, an R&B ballad with beautiful voices. The background is kept simple to focus on the voices that harmonize and work well together, full of the sentiments that arise from seeing a previous lover again. As sweet as the song is, the song lulls some, mostly due to the slower pace.

Ending the album is “Silent Stalker” featuring Double K. It starts off ominously with some fabricated electric sounds–a bit unexpected considering the trajectory the previous tracks created–before exploding into full pleads. JeA’s parts are low, seductive, and desperate, indicating that she’s playing the role of the stalker. Double K has two distinct rap segments; in the first he’s playful and coaxing, but he grows a harsher edge with JeA’s persistence. The last twenty seconds are particularly haunting as JeA’s vocals are mixed with Double K’s continued dismissal of this woman he doesn’t know well. JeA’s outbursts had the potential to be messy and out of place, but they actually swell well, turning the song into a story of obsessive behavior. It’s interesting how JeA’s parts until Double K’s second rap portion could actually be legitimate concerns of a girlfriend. But that second rap makes it clear how they don’t actually know each other.

JeA’s debut album shows multiple directions that all lead to the same conclusion: she has a fantastic voice and knows how to use it. Every song has its own charm, making this mini-album a joy to listen to. Her title song sits in the center of the album, letting the previous two songs build up to its intensity before sharply dropping off and later ending with a twist. It’s an exceptionally strong album that moves away from the strong and powerful image of the Brown Eyed Girls to show what just JeA is about. My complaints are few: the only track that doesn’t engage me as much as the others is “Let’s Hug,” though it’s still above average and well-enjoyed, as shown by its success on music charts.

How about you, readers? What did you think of Just JeA?