There are plenty of idol group members that attend school while promoting in their groups. However, the idol lifestyle is extremely busy, and idols most likely lack time to study while carrying out their promotions. Thus, when idols leave the industry to focus on studying, it seems as though they no longer wish to be idols, and deem focusing on studying more beneficial to their futures. After leaving the idol realm, when comments from these ex-idols or people around them suggest that there is more to “leaving to pursue studies” than one might realize, we begin to reconsider the nature of the statement itself, and what this might mean about the entertainment industry as a whole.

A couple of years ago, before LC9‘s disbandment, Eden decided to part ways with the Korean entertainment industry and continue his studies. Even while studying, Eden continues to keep up with his fans through various social media outlets such as Twitter and Instagram. More recently, there is also SoundCloud, Snapchat, and YouTube. Providing a platform to stay in contact with fans after leaving the industry raises several questions about his departure. Is he keeping his fans because he wishes to return to the entertainment industry? Or does he wish to keep up with his fans because he appreciates their support?

Contemplation aside, this desire to stay relevant even after leaving the K-pop industry allows for fans to learn more about what goes on behind the scenes of the idol world. In his Q&A video, he concedes that there are idols that claim to leave for school when they actually do not, but he “left strictly because [he] wanted to study.” Additionally, he comments of leaving the K-pop industry: “I can’t get too deep into it because it complicates other people who are still within that situation. So I can only talk about what I can talk about.” This makes one wonder what exactly goes on behind the scenes. Is it so problematic that merely mentioning it in a personal video might affect others still in the industry?

So apparently lc9 disbanded. Honestly everyone saw this coming. I just wanna thank the fans that supported and the members for being awesome

Some of these questions are answered in his recent video comparing idol life and his current life. He admits that he “hated” the idol lifestyle because of the lack of freedom. Additionally, “there was too much politicking” and “it’s not a fair system” but everyone knows it. He cites the strong emphasis on those who wins awards, yet the reality is that winners “aren’t based on anything, it’s really who has the best backing — sort of.” Eden’s comments imply that young people go into the entertainment industry to gain fame and pursue music only to find that the system relies on “backing” to ensure success. Thus, rather than focusing on music and entertainment, the focus is on appealing to these people and pretending to be someone you’re not. All in all, he says, the idol life has its positive sides. But if you want to get into it, you have to be aware of what you want and what you have to give up to achieve it.

The contents of this video seem to contradict his previous comment in the Q&A video about his hesitancy to talk about the idol situation. However, the Q&A video was created before LC9 officially disbanded, and this video came out after. Perhaps he wanted to protect his group members. At the same time, what Eden mentions in this video is nothing new. This makes one wonder whether or not he talked about what he was so cautious to avoid previously. His use of qualifiers such as “for now” and “sort of” also suggest that there may be more to the story than he lets on.

The fact that there is a darker side to the entertainment industry is not news to anyone, but it brings the issue back to the forefront as we reconsider other idols that have left the limelight to study, and what their departure tells us about the industry.

One such ex-idol is After School’s former member Bekah, who left After School to allegedly pursue her original dream as a designer. Like Eden, she keeps up with her fans through Twitter and Instagram. This departure did not seem questionable; it implied that she had her taste of idoldom, but realized that her dream was always to be a designer. However, the contents of a previous tumblr post (which has since been taken down) suggests that she left for other reasons:

This song explain simply what I felt and what was going on inside after all this time.

This isn’t about a boyfriend heartbreak, this is about giving everything you had to the someone’s or something’s and facing the consequences of being taken advantage of.

I just felt that you guys needed some honesty.

I just needed to let it out guys. Believe me, I loved performing and still do but there are things that I could never explain…

When they tell you that you’re not enough. That you quite don’t meet their standards yet. Fuck it. You don’t need that kind of negativity.

In the end it’s about being happy with who you are and what truly is important to you. That in the end, whatever they want from you isn’t important.

Though Bekah did leave to return to her studies, it seems as though there was more to the story. This post asserts that though she enjoyed performing, she felt “taken advantage of.” There also seems to be a theme of secrecy here, as Bekah admitted, “there are things I could never explain.” Thus, it is unsurprising that in an interview during the 2013 KCON, she claimed that she had plans to return to the entertainment industry. Additionally, her current affiliation with West Side Entertainment and the Kathy Muller Talent and Modeling Agency seem to confirm this desire. Bekah’s situation seems similar to Eden’s. They both disliked certain aspects of the K-pop industry and no longer wanted to partake in it. 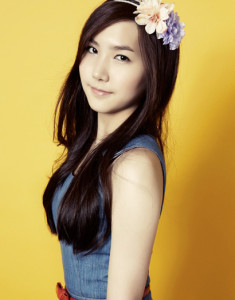 On the more questionable side of the spectrum, we have the controversy of A Pink’s ex-member Yoo-kyung. She was seemingly dismissed from the group, yet the official statement asserted that she left to pursue her studies. She is currently back in school, but disagreements about her departure implied a forcible removal from the group. Comments from her father brought the situation to light, and asserted that Yoo-kyung’s departure was not of her own will.

But why did the company insist that Yoo-kyung left A Pink to study? Perhaps they believed it was an easy way for them to get rid of a member without causing any backlash. Leaving to focus on studying entails that the idols themselves came to this conclusion after realizing that the idol life was not for them. The act of studying itself also has positive connotations because it implies studiousness and promise. In this sense, the idol leaves with a shield of maturity because it suggests that they have finally come to the realization that many parents share: the desire to become a celebrity is just another pipe dream.

The same goes for Eden and Bekah. Though they did want to return to their studies, another contributing factor may be that various experiences made the idol lifestyle no longer feel worth it. They wanted to pursue music, and did not want to be mistreated or feel obligated to appeal to those with power. Subsequently, going back to school may have appeared to be an appealing alternative.

Do you think “leaving to focus on studies” is merely an excuse to mask other problems in the industry? If so, is it a convincing excuse?