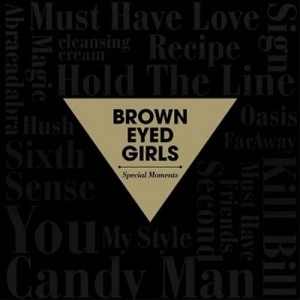 It has been a solid eight years since the four ladies of Brown Eyed Girls first debuted with their ballad song “Come Closer”. They have since grown and gone on to release five full studio albums. Their iconic single “Abracadabra” spurred an uptick in their popularity — signalling that this group may have a wider appeal than first realized. This latest greatest hits release is an out of the blue gift to the fans of the girl group.

Their company Nega Network stated that the older physical albums are growing increasingly difficult for fans to get their hands on, so they decided to go ahead with this greatest hits compilation to give the fans a hard copy of the older hits. The release date also seems prophetic with three eights – eighth day of the eighth month released on their 8th anniversary (that is some auspicious timing). However, the set up does seem to serve a greater purpose as it is devised during a moment where the popularity of Brown Eyed Girls appears to be in flux.

This compilation could be the most concerted effort Nega Network has put forth in a while to put some positive press behind the girls. Perhaps they have finally gotten a hold of their marketing efforts. They have arguably been an enigma in handling Brown Eyed Girls ever since their “Sixth Sense” promotions. Since that period, they have had some strange releases and poor marketing that have kept the girls from giving a full fledged promotion that their material deserves.

Brown Eyed Girls are not the average idol group. They fall somewhere in between an idol and the artist. Things may have changed for their company during that summer of 2009, when their talented girl group struck gold with their popularity and sales were peaking at an unprecedented high for the group. They tackle the unconventional and create an art that is meant to provoke conversation (see: “Cleansing Cream“).

In Nega’s defense, Brown Eyed Girls are a unique group — they do not ascribe to a regular release schedule because they have a certain quality to maintain. They have talent but do not merely coast on a simplistic promotion. Instead, they consistently push the boundaries of their artistic expression. Their MVs have a delicate quality that reveals the care taken to script, act, and shoot. Those fields include sexuality, parody, and social statements. Each comeback will certainly require care and precision.

The issue I have with Nega isn’t really in the quality of each release (though “Kill Bill” was not my cup of tea); it is in fact with the marketing efforts devoted to each promotion. With every impending comeback, there was merely a quick teaser two or three days prior to their MV release that coincided their album’s release. Where is the hype or major media play? In addition, their hiatuses are long but the tidbits they give to fans are not fully realized. They will release material, and the girls would be nowhere in sight to promote it. This happened when they released “The Original” and with subgroup M&N‘s “Tonight.” Both came during periods of hiatus to excite fans, but ultimately only to serve as a meek appetizer in their long wait. It seems that Nega Network has been sorely negligent in their efforts to promote the group.

It is no wonder that Ga-in had decided to sign with another agency to promote her solo materials. Loen Entertainment (and later, to a lesser degree, APOP Entertainment) has been doing a better job of inciting press for her individual works. Ga-in made great headway in establishing herself as an artist outside of the group. She is notably the brightest star (in terms of name recognition) of the four and perhaps the agency’s management had something to do with bringing up excitable conversation concerning her solo material.

Flash forward to the Nega Network of today, and this company sure has a lot of pressure to make the next release a major success for the girls. “Kill Bill” did not perform as well as any of their latest singles, but it by no means was a flop. The group that has long been defined by their artistry will have to reassert themselves as the talented, forward-thinking group that stays at the forefront. This eight year anniversary explores the link between bridging the younger generation with the older sounds of the group.

Maybe this compilation is Nega Network’s attempt at setting up a big promotional push in the fall. They do have a new song with “Hush” on Special Moments (but of course there is no MV or performances to excite any publicity). All in all, this compilation could be a blessing in disguise. “Hush” isn’t a great song, but it is new material and even without promotions, it has managed to reach number 62 on the Gaon digital chart. The release puts the group’s name out there and gives a chance for their history to be brought to the forefront. Perhaps, the agency is planning on signaling a return to the sound of their earlier days. Nevertheless the girls are reported to be making a comeback in the fall. Whatever the material is, I am still on the edge of my seat waiting for it — hoping they will get a better marketing push to buffer what I anticipate will be great stuff from the girls.