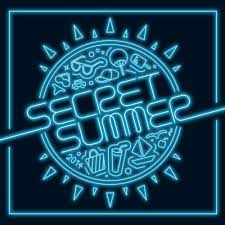 It’s been a while since Secret has made a comeback as a whole, what with Japanese promotions, dramas and solo debuts, However, they’ve made a triumphant return with their fifth mini, Secret Summer. Many fans were disappointed with the cutesy releases Letter From Secret and Gift From Secret, and hoped that TS would return the quartet to their sassier sound for their next comeback. Those fans will not be upset with this mini.

Secret Summer opens with intro song “Feel The Secret”. Actually, I lied. “Feel The Secret” isn’t a song; it’s a statement. Secret is back and sassier than ever. The girls are gone and the women are back. It’s a very confident number, and every member sounds excellent. Add some horns, and you have a killer opening. The only problem with “Feel The Secret” is that at 1:13,  it’s too short.

Title track “I’m In Love” starts off slow and melancholy, echoing the teasers. And then the horns kick in. Rarely is being blatantly mislead by promos such a pleasant surprise. “I’m In Love” is a jazz piece, and the sound of that era isn’t present just in the instrumentals but the vocal style. Secret sounds fairly breathy, but it’s obviously a stylistic choice. It creates a distinct sound, blending confidence with unease– which suits the song perfectly. “I’m In Love” is about wanting to be in love with someone, but not fully trusting that they won’t hurt you. 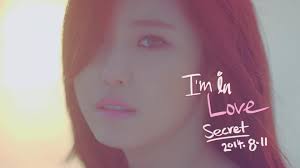 “Look At Me” is the perfect follow-up to “I’m In Love”, thematically, at least. Turns out Secret was right to doubt their relationship. They’ve encountered every woman’s’ nightmare– that this seemingly perfect guy just wanted sex, and as soon as he got it, he’s long gone. They’re not sad or accepting either; “Look At Me” is the song of the woman scorned, like whom hell hath no fury.

Between the horns and the sharp, fierce delivery, it’s clear that these ladies are pissed. Their man may have used them, but there’s no way they’ll let him get away with it. Sadly, the production is inferior to the vocals. “Look At Me” has way too much going on to sound good. The track’s crowded and noisy, and it obscures Secret’s excellent performance.

While “Look At Me” was the angry break-up, “U R Fired” is the exhausted one. It’s a stellar piece of work, especially because this song should not work. It mixes acoustic guitar with EDM, set at a midtempo. Add in the fact that all four ladies sound dead on their feet, and “U R Fired” should fail massively. Yet, it works. Maybe it’s the intensity of the vocals. Maybe it’s that there are not many elements in play: there’s never more than one or two going at a time. Maybe there was a Satanic sacrifice. Don’t know, don’t care. All that matters is “U R Fired” is easily the best track on the album, one that encapsulates that feeling of just being done when a dysfunctional relationship finally ends.

The last track is the mature “Could Do Better”. This is the perfect way to close the album, as it shows the ladies of Secret have learned from their earlier mess of a relationship. Don’t go for the bad boys, the dangerous ones, the rebels. Yes, they’re exciting and sexy, but most treat their girlfriends like crap. Instead, Secret has realized that what they really need is a man who’s nice, and funny, and eats dinner with you even if he ate already. Musically, “Could Do Better” is a generic ballad, but the ladies all sound great. The emotional impact it leaves far outstrips any musical impact, but it really works.

Secret Summer has definitely wormed its way into my heart. It’s well produced, and gives Secret their sass back. Plus, it has a narrative running through the whole thing. Secret Summer gives us the tale of four ladies reclaiming their confidence, starting a new relationship, and watching it crash and burn before realizing that maybe they need to change what they look for in a partner. Between Secret Summer and Kim Hyun-joong‘s Timing, there seems to be the start of a new trend in k-pop albums. We can only pray it goes somewhere.

(Images and video via TS Entertainment)