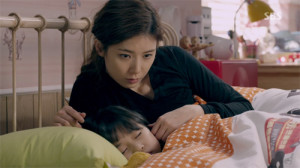 After Lee Bo-young’s incredibly successful run with last year’s supernatural thriller I Hear Your Voice, she’s back with another thriller, albeit with a time-travel element. It’s almost like the female counterpart to Two Weeks, except this time, it’s the mother, instead of the father, who only has – well, fourteen days — to save her daughter.

The first two episodes do an impressive job of introducing the characters, and setting the plot into motion. Although we don’t immediately see the how all the characters are connected, the show slowly reveals that there is indeed a complicated web of relationships. For example, we think Yong-gyu (Baro) is merely Saet-byul’s (the extremely adorable Kim Yoo-bin) friend, but we find out that he’s also Dong-chan’s (Jo Seung-woo) nephew. And the drama does not leave it at that, we also see flashbacks which hints that Yong-gyu might have been part of the police experience that scarred Dong-chan and made him leave the police force. There are a ton of other side characters that only been touched upon – Snake’s lead singer (Noh Min-woo), Ji-hoon (Kim Tae-woo), Yong-gyu, but we can expect them to eventually spend more time in the spotlight and play out their part in Soo-hyun’s quest. 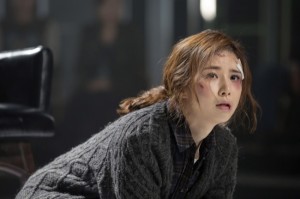 God’s Gift is really utilizing Lee Bo-young’s abilities to its full extent. Her intensity of a mother’s instinct and over-protectiveness is extremely spot-on. When Soo-hyun (Lee Bo-young) finds out that daughter, Saet-byul, has been brutally murdered, the way she expressed her excruciating grief was so heart-wrenching that the audience can’t help but feel every bit of her sorrow. The depth to which the drama chose to express her anguish was also impressive. It did not just rely on scenes of her crying and wailing, but it actually took on a more active role through scenes such as Soo-hyun appearing on a TV broadcast to appeal to the killer, Soo-hyun reading Saet-byul’s diary and so on. This enables the audience to empathize and identify more thoroughly with her.

Soo-hyun is an extremely impulsive and fearless heroine. While she could probably use some think-before-you-act restraint in fear of inevitably screwing something up, I think this is a great character beat for a mother who just lost her daughter. It’s not so much that she’s foolishly brave, but it’s more that she’s so blinded by her fear of losing her daughter a second time, that her fear of danger immediately takes a backseat. This is a realistic depiction of a parent – she would sacrifice her life in place of her child in the blink of an eye, and her actions hold her true to it. 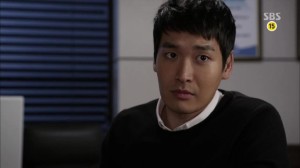 At least, it’s a comfort to know that her two male counterparts, Dong-chan and Woo-jin (Jung Gyu-woon), both hail (or used to hail) from the police force, and show more rationality and cautiousness than her. Perhaps it’s this balance of Soo-hyun’s recklessness and their astuteness that makes this drama fast-paced and exciting. She gets herself into difficult situations because she just runs headlong into trouble without thinking, but then this gives the other two the opportunity to rack their brains to get her out of hot soup. And that’s exactly why this drama is so addictive — the pendulum is constantly swinging back and forth between the protagonists and the villains. Although I know the leads can’t die this early in the show, I’m constantly at the edge of my seat, nervous to find out how they get themselves out of their current scrape.

Soo-hyun’s husband, Ji-hoon, is still an enigma to me at the moment. On the surface, he seems like a loving husband and father. But we see Soo-hyun’s antics tearing at at his cracks. In the two separate realities, he’s constantly blaming Soo-hyun for causing Saet-byul’s issues – one for her kidnap, and the other for her allergic reaction. While I can somewhat understand his frustration at Soo-hyun’s seemingly crazy ideas, the blame game never benefits anyone. Also, the fact the ex-policeman Dong-chan finds Ji-hoon’s face familiar, already has me worried for what the drama has in store for Ji-hoon. 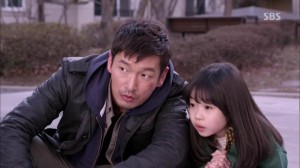 With so many male leads, including a husband, I’m not sure if the drama is gunning for a romantic interest in either Dong-chan or Woo-jin. Woo-jin and Soo-hyun were probably involved with each other some ten years ago, and Woo-jin obviously still has a soft spot for her. But so far, there’s no indication of interest on Soo-hyun’s part. In fact, I’m more on board the grudging friendship that has formed between Dong-chan and Soo-hyun. Is this going to result in anything romantic? I’m not sure, but the cute scenes where Dong-chan plays ddakji with Saet-byul, already has me prepared for possible fuzzies.

While this drama basically hinges itself on a mother’s love and the desperate need to save her daughter, there’s no way that we can overlook the supernatural aspect. It’s still murky as to how Dong-chan and Soo-hyun are the only one who are conscious of the time travel, but I am intrigued as to how the drama plans to play this out. The idea of fate is toyed with a lot, since the two leads are essentially attempting to change history. However, the creepy things is, no matter how they seem to take an active pursuit in preventing  history from repeating itself, the end result is the same. Saet-byul still cuts her finger, Soo-hyun still burns herself, the two women are still murdered, albeit in a different manner. Does this mean that they didn’t do enough, or that people’s fates are unchangeable? And then of course the most important question, is Saet-byul’s fate doomed? Unlikely, but the drama is going to have to weave this plot exquisitely to whet my appetite. 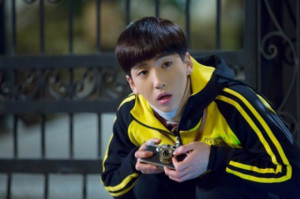 While 24 episodes may seem a long run for the basic premise of a mum trying to catch her daughter’s murderer, there’s no doubt drama is going to include a lot of twists and turns, and the first few episodes are already proof of that. Already, there are red herrings littered everywhere – the ransom kidnapper and the serial murderer.

The one thing doing this drama a huge favour is that while we expected the villain to be crafty, the protagonists are also intelligent. The thrill comes in watching the two sides outwit, outplay and outlast each other. Survivor throwbacks, anyone?

There are so many deeper connections and questions that I have right now, but I have high hopes that God’s Gift will answer them satisfactorily. The writing is sharp, and the plot is thick with suspense. All I have to do, is sit back, enjoy, and try not to bite through my nails in anxiety.