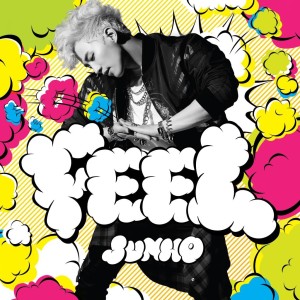 Following his solo Japanese comeback, 2PM’s Junho has released the Korean version of “Feel.” While Junho is still a total cutie pie, “Feel” is a little flat and uninspired.

It lacks distinctive color that would showcase where Junho stands as an individual. This should have been his time to shine, but instead, “Feel” doesn’t provide anything that simply screams “JUNHO!”

“Feel” is like a track we would expect from 2PM – just without all the members. It’s a dance tune, with a slight smoothness. The track is also a bit of traditional K-pop, so to speak. It’s what you would expect a club banger to sound like: all electronic. Although there are subtle melodic changes, it is still just a dance song, all the way down to the quintessential dubstep dance break that has become so common place.

The song would have been much better if the style during the bridge (directly after the dance break) had been the style throughout. That particular section was very nice and the bright spot on the track.

Just as the track sounds like typical pop, the MV is a typical pop MV.

In the beginning, we have the usual hangout scene: group of random people hanging out in front a dusty store, with a basketball hoop and enclosed by fences. Nonsensical, but par for course. GOT7‘s JJ Project (JB and Jr.) play the goofy sidekicks for Junho. The next logical step is to have the object of affection show up on the scene. Let the games begin: Junho must woo said girl — played by Min Hyo-rin.

Then we transition to the club scene. With a grungy look, the club looks like it’s straight out of a GOT7 MV. JYP Entertainment still can’t seem to pack a club so that it would look less like the neighborhood clubhouse.

The one strange scene is in a wooded campsite. Did the set designer take cues from rednecks? We got a Ford Ranger decked out in a camouflage net, and bull horns connected to a bed extender. It essentially takes common redneck-associated items and throws them all together in a pretty hilarious/atrocious manner.

Additionally, while actress Min Hyo-rin looks gorgeous, there is such disconnect between her and Junho, that it comes off as awkward. It is also this disconnect that makes Junho appear to be a bit of a douche, instead of an earnest suitor. This is particularly true in the initial meeting for the two. Junho appears to have trapped her unwillingly against a pay phone, and she seems uncomfortable. While the affection does grow, her “not impressed” look is still prevalent.

For a love song, there is a serious lack of feeling in her eyes; Junho does a better job at displaying proper emotion. Perhaps she’s supposed to play coy and uninterested: however, if that’s the case, then why is she willingly flitting from place-to-place with him?

That of course leads to an even bigger question: when did this MV become one involving a supernatural power? The MV appears normal for most its duration and then suddenly, Junho can teleport with the snap of his fingers, in a whiff of smoke. This does explain why the scenes change quickly, but the explanation is randomly done.

“Feel” isn’t without a little cheese, either. Singing passionately to a pretty girl, and even doing so in the headlights of her car, is K-pop crooning 101.

Lyrically, “Feel” is a typical love song: boy sees girl, boys loses mind, boy tries to get girl to love him. Said boy also says things filled with innuendo, such as “I feel so free inside you.” I’m sure you do, Junho, I’m sure you do.

As much as the song and MV lacked, we do get to see Junho’s skill set. There’s no doubt that he can sing; he’s a main vocalist, after all. But often, the other members cast a shadow over him. He also shows off a pretty decent dance; though without any stand-out moves, it’s nicely executed.

“Feel” may not leave some with a great impression. Others will love it for its classic K-pop/J-pop style. If it’s not your cup of tea, however, perhaps check out the sister track “Hey You” – a rocking anime-like tune that’ll give you a little lift.

The song isn’t bad, but it’s also nothing special. Therefore it is your average K-pop track.