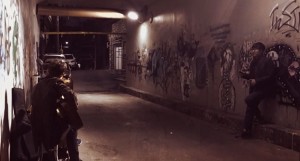 Welcome to this week’s continuation of our regular segment, K-pop Indie Gem. This week’s highlight is the duo, ZZYZX Project. The group gets their name from Zzyzx Road, a bizarrely-named road off of Interstate 15 that leads to Zzyzx, California in the U.S. and is somewhat of a landmark for its strange name and through references in music and film. They intend to work with the idea of a desert oasis (Zzyzx is in the Mojave Desert) as they tell their stories with simple acoustic guitar and vocals.

Distributed by Mirrorball Music, the duo’s music is blend of folk and rock for a gifted acoustic style. Their first EP, Flying by Night (alternatively called Fear of Flying), was released in 2013. This year, they’ve followed up with their second one, Walk in the Rain. Admittedly, there aren’t many songs out from the duo; each EP has only three or four songs on it. But the pairing of the vocalist’s soulful and dexterous voice with guitar is an immediate standout. Accompanied by generally lively sounds, the end product is a scintillating listen. It’s impressive what two guys can do with a minimal number of instruments. We’re fortunate that each of the songs runs between four and five minutes, slightly longer than most.

“Flying by Night” is the first song off of the album of the same name. The majority of the track is just vocals and acoustic guitar, yet the minor usage of drums and bass guitar aren’t very prominent when they are introduced. They add an extra kick to support the heavy vocals but are used sparingly to keep the song on the lighter end.

Next is a live performance of “Hero,” also on Flying by Night. This performance is quite a treat, showing that acoustic doesn’t have to mean gentle guitar and vocals. Both can go hard for an intricate performance that rhythmically dips and swells in such a pleasing manner.

Another song from Flying by Night, “Before the Sunrise” takes a smoother approach with the guitar as the vocalist opts for longer notes and emotional delivery. I particularly enjoy the drop at 4:20 and the build up through the end.

“Walk in the Rain” is off of, you guessed it, Walk in the Rain. The song has a wonderful buildup showcased emotionally well by the vocalist. The sounds of rain at the start and end of the song help set the mood and start off the track. With the aid of more instruments, “Walk in the Rain” is a rich aural experience. A live performance version is also available, unfortunately without any of those rain additions; just don’t get distracted by all the people walking by.

“A Cheap Life” is the last off of a very short Walk in the Rain. The slips into some more familiar alternative rock territory. The vocals lend an extra sense of sorrow to the song that imbue it with trembling life.

It’s unfortunate that there aren’t more official videos of ZZYZX Project’s songs. It’s only been a year since their official debut, so there isn’t much out there in general. The duo produces such a raw sound that’s soothing to hear. The vocalist’s quick vibratos remind me a bit of some Indian classical music at some moments, which was especially surprising to hear. The two present music a sound that draws the listener in to hear more, effectively trapping them there until the end. Moreover, all of their songs sound so complete as an experience. Whatever they come up with next is sure to be a delight.

If you enjoy their sound, take a look at their YouTube and Soundcloud media sites for upcoming material, and keep an eye out for the next band we highlight as a K-pop Indie Gem!