Another month has passed, and it’s time for our next Unsung Artists feature, a segment in which we spotlight MV releases we didn’t manage to cover the previous month. As expected of late-spring/ early-summer K-pop, comebacks were abound in June, with some high profile releases from Twice and Seventeen, as well as anticipated post-Road to Kingdom comebacks like Golden Child‘s.

Our picks for this month’s Unsung Artists display thoughful uses of lighting and colour, as well as some delightful low-key feminist themes. Not featured here—because its MV was mediocre—but also worth checking out is Ha Sungwoon‘s retro funk-laced EP Twilight Zone.

The biggest surprise of the month, “Girls”–and its lush, dark visuals that skirt at the edges of horror tropes–captures the viewer’s attention from its opening shots. Drawing from the aesthetics of lolita horror, the MV depicts the members as innocent, girlish figures. They’re almost always clad in flowing white dresses, with vacant stares and slow, stiff movements that give them a doll-like appearance.

Despite invoking the virginal, Madonna image often imposed on young female idols, the MV doesn’t quite cave to this stereotype, instead treading the line between archetyping and subversion. This fine balance is achieved through the introduction of elements that are almost horrific, but not quite. Scissors loom over a wardrobe in which one of the members sits, staring up vengefully at the camera. The presence of the scissors invites associations with violence, later reinforced by a set filled with teddy bears, red thread spilling out of their backs. These hints tie in with the lyrics which accuse a lover of toying with innocent women, who are as vulnerable as young girls in the face of love.

Yet overt acts of violence are never shown, for they are emotional and not physical; we only see oblique fragments of the aftermath. Saebom rests on a pool of thick red liquid, a recurring motif that suggests deflowering, and Sohee lies in the rusted bathtubs of an abandoned bathroom with creepers climbing up the walls. The girls spin around under white sheets that fashion them into ghostlike presences—together with the doll-like behaviour, these images suggest a certain lifelessness inflicted by their heartbreak. The virgin archetype is easily invoked at the detriment of women, but “Girls” instead appropriates it to show the havoc that an unhealthy relationship wreaks on women.

The Brown Eyed Girls have long been icons of female empowerment in the K-pop scene. Instead of going with the group’s usual sexy approach, though, JeA’s solo MV opts for a more playful tone, even as it digs its heels in and rejects damaging expectations imposed on women. In the opening scene, the camera pans upwards to show numerous classic rom-coms, before settling on a video tape titled “How to be a Good Person”.

JeA sits in a living room filled with signs of an epic binge-watch session: snacks sprawled across surfaces high and low, and the rom-com movie tapes strewn here and there. She squints sceptically as the tape turns out to be a manual on “How to be a Good Girl”, hosted by a duck puppet who could surely be a mascot of the meninism movement. It cheerfully advises the female viewer to “stop eating” and “always smile—even if you are angry!”, pointing to infuriating forms of body control that women suffer under.

JeA is taking none of it, and launches into a jazzy clarion call for women to stop following patriarchal expectations of women, or crave compliments for adhering to these expectations, and instead become “greedy” for the freedom to be however they want to be. In rejection of body shaming, she savours cake and tosses away a shredded piece of measuring tape. She also dons vividly-coloured power suits, places a cactus in the spotlight—its spikes perhaps referring to prickliness, a commonly frowned-upon behaviour for women—and drinks lemon juice, satisfyingly crushing lollipops and other candy that stand for the sweet words and demeanour expected of women.

Baek A Yeon – “Looking for Love”

“Looking for Love” shares the gentle sense of humour of “Greedyy”. While “Greedyy” calls out harmful expectations of how women should behave, “Looking for Love” provides social commentary on a more personal, emotional level. It focuses on a sense of loneliness and wanting to be in love, exacerbated by the proliferation of happy love stories in the media and signs of an ideal life on others’ social media posts. In many ways, it feels like the love child of A Yeon’s 2016 “so-so“, which took on a similar theme of wanting to date, and Sunmi‘s “Noir“, a dry satire on the toxic culture social media creates.

The idea that there’s more than meets the eye to what you see on screens—be it television or phones—is foregrounded right from the start. A Yeon wears a velour tracksuit, and retro items are artfully placed around her living room to look like they’re effortlessly strewn around. The camera soon pulls back to reveal the reality of a messier room, but it pulls back yet again to show more carefully curated versions of the same set.

This self-reflexivity is compounded by more scenes that create an ideal picture, only to be undercut when the screen widens to show the full setting. A Yeon poses for a healthy meal of salad and bagels topped with avocados, but all kinds of snacks and confectionery are piled around the edges of her kitchen. She constructs all kinds of photographs that are commonly seen on couples’ Instagram accounts: shared meals, hands tightly clasped together, but these illusions are punctured when she is shown to be alone.

While these mainly show her efforts to reduce her loneliness, they also poke fun at how easily photos on social media can construct a false, ideal image. Although the MV eventually gives her a happy ending of falling in love just like she wanted, it nonetheless makes her yearning well-felt with a balance of humour and sympathy.

Sunmi’s latest MV takes its cue from the song’s city pop style. It’s awash with 80s synthwave aesthetics—retro futurism, and hues of dark purple, neon pink, yellows and oranges. Befitting of the title—which translates literally to “Purple-lit Night”—purple is dominant throughout the MV, whether it’s Sunmi’s eyeshadow or the violet tint cast across all scenes, giving it the feeling of a vintage film photograph.

Much like how the title is irreverently botched up—”Pporappippam” is a peculiar stylisation of the Korean title, “bora bit bam”—the MV allows Sunmi’s idiosyncrasies as an artist to shine. She stares at the camera with her signature deadpan expression; throws her limbs around almost defiantly when performing the choreography; floats in the middle of her living room, held up by smiley-faced balloons that contrast with her straight face; and poses in the middle of the road with Laa-Laa headgear.

Given how consistent Sunmi’s MVs have been in showcasing her wonderful droll humour, it shouldn’t come as a surprise that “Pporappippam” should also deliver, but it still delights with how it spotlights her, while also bringing to life an aesthetic so apt for the song’s genre.

At first glance, “Butterfly” appears to be a lightly-aesthetic, dance-focused MV with a smattering of straightforward symbols—flowers, butterflies—related to the idea of metamorphosis and growth. Upon more careful viewing, though, it reveals an excellent use of colour and lighting. Soft lighting creates a dreamy mood, and saturated colours fitting the season are softened to look less vivid.

The colours are a summery take on the cosmic colour palette that characterises many of WJSN’s MVs, most evident in Seola‘s with a peach and pink-hued sky. Each member’s set has a dominant colour—red for Seola, green for Dawon for instance—while the group dance scenes feature a morphing palette of the individual colours combined. The shifting colours not only create a sense of dynamism, but also visually represent the idea of change that the lyrics sing of.

Aside from the use of colours, the use of a sheer fabric to cover the members and form a reimagined chrysalis is also note-worthy. The imagery is simple but effective, underscoring the song’s uplifting message about self-discovery and growth: “Fly like [a] butterfly /  Even if I’m not splendid, I’m free”. Definitely give the accompanying mini album, Neverland, a listen as well: it’s sweet and upbeat, but not cloyingly so, filled with solidly produced mid-tempo dance pop B-sides that rival the title track.

Like “Butterfly”, “Drawing You” makes interesting use of light and colour. Wistful ballads are typically accompanied by MVs with dark, muted palettes—visual manifestations of the sorrowful moods the music conveys. Despite sounding sad, “Drawing You” actually expresses a mix of affection and longing for a love interest, without hints of a separation or of the love being an unattainable one.

The colour scheme is fittingly ambivalent. Golden hues cast over the set evoke the colour scheme of a sunset, and this idea of a day ending in turn creates a sense of nostalgia. In contrast, pink, purple, and blue pastels shimmer outside the window, providing a sense of hope. Both colour schemes give off a sense of warmth, helped by the use of soft lighting to blur out sharp edges. The slow movements of the camera and gradual focus on props like a vase of flowers add to the sentimental mood. The confetti falling in reverse, together with the soft rainbow-coloured lighting, adds a surreal air that gives this otherwise mellow ballad more dimension. 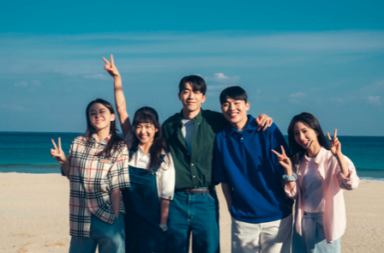 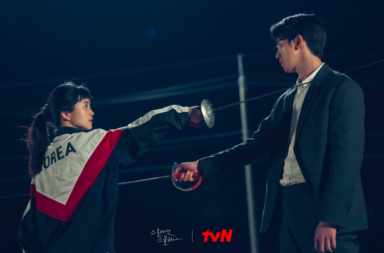