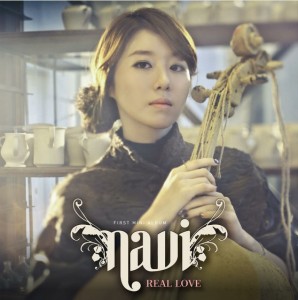 Solo artist Navi is all set to release her first mini-album, Real Love, in early October. Beforehand though, music video for track “Don’t Go” was released, and that is the subject of today’s music video review.

Before we get into the specifics, here’s a brief background on Navi. She debuted under ITM Entertainment in 2008 with single album I Luv U, with title track “I Love You“, promoting the rap version that features Tablo. Ever since, she has participated in numerous singles and an OST here and there for dramas like Poseidon and 49 Days. Her first full-length album, Hello, was released in early 2011, featuring artists such as K.Will, Crown J, and even Beast‘s Jun-hyung with title track “Well Done“. However, the primary reason she may be familiar to idol fans is for her covers. Dubbed the “Queen of Covers,” Navi has covered quite a number of artists, from 2PM and Super Junior to the Wonder Girls, 2NE1, and C.N. Blue. She has a phenomenal voice, and it’s no wonder she seems to make frequent radio appearances.

If you haven’t already seen the music video for “Don’t Go”, check it out below:

The first striking aspect of the music video is the cinematography. It plays with soft lights, projections, and passing time to create this shaky vision of watching a woman feel the loss of breaking up. Most scenes have a clear light source that shines brighter than the rest, allowing for a glowing and muted effect on Navi in her position, often to the side or not directly near the light. As a result, the effect created is one of swathing Navi in memories throughout the music video: she’s perpetually in her past feelings, which makes it difficult for her to move on. In addition, the scenes used in the music video are of highly-personalized and attractive interiors. This type of cinematography coupled with well-decorated scenes really makes for an aesthetically pleasing music video. 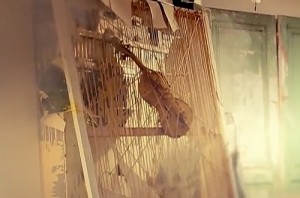 The plot is based on the manifestations of memories and sentiments of the past in the objects or symbols associated with those specific memories. In particular, two recurring motifs are a violin that has seen better days and two butterflies: a blue and turquoise one. The violin seems to be representative of either the significant other or the relationship as a whole, perhaps being a strong tie between the two partners. I’m inclined to believe it’s the latter only because of the scenes in which Navi herself is with the violin. This violin is also tangled up in a net of strings, indicating that it’s difficult to break free from the past. The two butterflies lurk together until the turquoise one disappears, most likely indicating the broken relationship and loss of that partner. These butterflies frequently appear with the violin, but they are also by themselves in several scenes, most prominently in the ones involving projection of the butterflies onto walls and Navi.

Another interesting development was the use of cups with string attached. Quite a few of the lines of the song end in questions or pleads, so it’s as if Navi is just waiting for a response, continuously listening for one, but not receiving one, which only causes pain in the end. Those cups are on the childish side, which in itself shows the known futility in the those actions, yet they are completed anyway because of that longing and hope. The introduction of rain was also used well, albeit in a traditional manner. Rain tends to have a cleansing and sometimes cathartic effect, and in the scene following the rain, we see the burning of both the net and the butterfly, suggesting an attempt to move on. 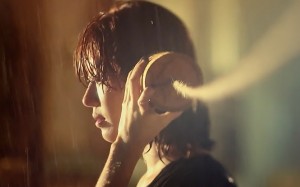 On the subject of Navi’s acting, it seemed appropriate for the song. Most scenes had her singing, which was most likely to her benefit as her acting didn’t seem particularly good. It was average and enough for the music video. Her styling was kept on the classy side, mainly black and white, with more normal clothes for her rain performance. On the subject of Navi’s voice, on the other hand, we have a song that shows a good range of vocals, power, and control. And for once, the melody line followed a bit more of an unpredictable route, especially during the verses. The song has a fairly medium tempo that helps draw viewers in; it’s not too slow or so fast it drops out of ballad territory. The sheer power during the high notes really brings the song to a climax. But a downside is that because her voice has such power, it’s used frequently. The chorus lines have strength behind them and high intensity, nothing to rival the climax, but still enough to be similar and cause for perhaps a different type of high point.

With excellent cinematography and vocals, an intriguing plot lacking in some comprehension, and decent performance, “Don’t Go” receives a 4.3/5.

Seoulmates, did “Don’t Go” tug a bit at your heartstrings? Or get you excited for Navi’s upcoming mini-album? Don’t forget to leave a comment with your opinion!