Lunafly Takes Off With "How Nice Would It Be" 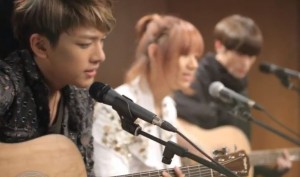 Idols love their acoustic covers, that’s a fact. But while it’s not weird to see idol groups covering acts such as Jason Mraz or Bruno Mars, it’s harder to find some equivalent in the Korean mainstream scene to those music-wise. Acoustic songwriter-type songs are usually reserved to indie acts such as 10cm or Standing Egg, while idols are usually divided between dance groups and ballad groups. The closes attempt in the idol world would be CNBlue. And now, Lunafly.

My fellow writer Fatouma covered some weeks ago Lunafly’s two pre-debut English tracks as well as some basic information about them, and the release of “How Nice Would It Be” marks their official debut. “How Nice Would It Be” is actually a remake of their track “Super Hero”, originally in English, a track composed by the members themselves and whose lyrics have been remade for the Korean version with the help of Kim Eana, lyricist of a good amount of hits, especially Nega Network‘s. Either way, there’s not much difference between the two lyrics, both being pretty generic love songs, although “Super Hero” deals with a break up while “How Nice Would It Be” talks about the everyday of a couple.

The song itself, as Ambika said in her article, is pleasant and light-hearted, but not especially interesting. Both the lyrics and the music are nothing we haven’t heard before, although the song does display the members’ singing abilities. Yun and Sam, the two singers — the third member Teo is in charge of the drums and the piano, and I can’t wait to hear this side of him — have both interesting voices. Yun has a soulful voice and pretty good voice control, and although Sam has also a nice color, he sounds much better in the English version. His voice sounds a bit husky when he forces it, and although at first I found it appealing, it’s pretty obvious it doesn’t come naturally to him and it sounds awkward at times, like he’s whispering more than singing. Curiously enough, he didn’t do it in the first version and it sounds much more fluid. They do harmonize quite well, however; their voices are a bit distinct and work well together, as well as with Teo’s background vocals.

The beginning of the MV with all those people whispering Lunafly is unnecessarily annoying and the song ends rather abruptly, resulting in an awkward ending. 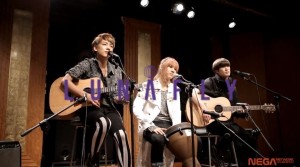 The MV itself is, to put it simple, boring. It consists basically in shots of the members performing acoustic in two different sets and solo shots of the members, and it gets soon repetitive and bland since there’s nothing else that stands out, not the photography nor the styling — and what the heck have they done with Sam’s hair. And yes, you can do a MV out of two or three guys performing and make it wonderfully interesting. Besides, Teo’s solo shots are a bit awkward — poor kid, he’s already being sold as some sort of mature Taemin, but he’s awkward, what can I say. I’m also not really fond of the false acoustic concept, as some scenes at the beginning that include studio material suggest, it is a bit pretentious (I mean, the boy of the drum seems to be playing and no drum sounds can be heard). I think the song definitely fits some simple MV, and the concept of the guys simply performing is perfectly ok, but not rightly done here.

I admit I was expecting a bit more from Nega Network — since the boys themselves compose their one music, at least invest a bit more in the MV –, but I’m also fully convinced that they have the potential to come back with interesting things in the future. And Sam has the nicest British accent, so I wouldn’t mind him staying around.