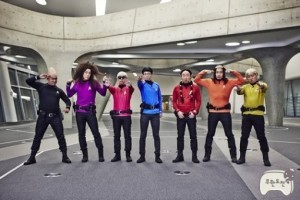 We’re almost half way through March and one week closer to Spring so what has the K-popiverse had in store for us?  As for K-drama fans the biggest question this past week was 3 days or 14 days? Two huge dramas premiered on SBS last week: Lee Bo-young‘s  God’s Gift – 14 Days on Monday/Tuesdays and Park Yoo-chun‘s 3 Days on Wednesdays/Thursdays hae y’all decided which is gonna be your new addiction? And for K-variety, we had a little out of this world adventure from our favorite Infinite Challenge aliens at the soon-to-be opened  Dongdaemun Design Plaza.

The following are the top 5 Things that happened in K-pop last week that I thought were a bit more special than the rest. If you are not up-to-date with your K-pop and don’t like spoilers, turn back now because spoilers most definitely lie ahead.

In its latest edition of the show, the cast of Kim Byung-man’s Law of the Jungle Borneo are being split into two teams and challenging each other “Hunger Games” style.  They even had a “Cornucopia” style opening game where both teams had to race to a spot to pick out the gear they wanted–minus all the bloodshed, though.  I’m pretty sure that the non-bloodshed induced screaming was from ZE:A‘s Kwang-hee and not from the two women on the show.  Looks like it’ll be an interesting time in Borneo–what they should really be scared of are the head hunters…

I enjoyed Lunafly‘s latest release “Special Guy” featuring the Brown Eyed Girls’ Miryo.  It’s a different sound for them with the electronic beats and funky hip hop-ish sounds mixed in.  And come on, they got Miryo to help them out–how could that be bad?

The acoustic composition team of Something on K-pop Star 3 definitely had what it takes and more in my eyes.  They were pumping out original songs and creating some awesome performances singing and playing guitars.  I was totally flabbergasted that they did not make the Top 8– I mean seriously.  Not to be a hater, but I can not fathom that Jang Hannah and Bae Min-ah are in the Top 8, but Something isn’t. It could be that their style is to close to last year’s winners Akdong Musician, but it’s no excuse in my back. Something were special and I wish them both, Jung Sae-woon and Kim Ah-hyun, much luck–not that I think the talented duo will need it .

2. Running Around Down Under

The cast of running Man headed Down Under for a special in Australia with guests Rain and Kim Woo-bin.  Song Ji-hyo was missing in this episode making it a boys only party, but is in previews for the next episode so it looked like she joined the cast after filming for her current drama. It was a lot of fun as Rain’s image took some definite hits and for the cute moments between the team of Yoo Jae-suk and Kim Woo-bin. Kim Woo-bin experienced more than his fair share of firsts on the episode–it was so cute when they showed him holding on tightly to Yoo Jae-suk’s hand because it was his first helicopter ride ever–doesn’t he know Yoo Jae-suk is the biggest coward in Korean Entertainment? What I enjoyed the most though was the interaction between the cast and the boys having some good clean fun.

Technically cheating here as Nell‘s latest hit “Four Times Around The Sun” debuted last, last week with its awesome MV.  But since I was unable to do 5 things last week and I kind of make up the rules for 5 Things–I figure I can stretch them, too.  Especially for such a well deserving rule breaker, Nell makes a triumphant comeback with a beautiful song.  Here’s their performance from this past week’s Inkigayo.