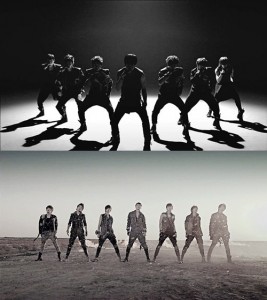 TOP Media, home of Teen Top, have debuted a rookie group by the name of 100%. As far as group names go, this could be the first group name that is completely stylized with numbers, but at the same time makes sense, sort of. It’s a peculiar name, but manages to be infinitely better than the name Teen Top, so step in the right direction for names it is. They’re a seven-member boy group, so Angels will have to wait longer for a sister group for their beloved Teen Top. That said, hopefully TOP Media manages to let these boys debut with a concept and song starkly different to Teen Top.

I’m not the biggest fan of Teen Top, but I’m still interested in this rookie group. Rookie groups have increased considerably in quality since last year, so there is more hope that they’ll a hit rather than an utterly terrible miss. With Teen Top’s considerable fanbase, the boys of 100% will have a chance to get some name recognition. But the similarity in member numbers and the fact they’re another boy group might have some fans initially turned off because of the assumption that they’re just another Teen Top.

This MV for “Bad Boy” had me scratching my head a couple of time while watching it. It felt like it was a hodgepodge of old sets that I’ve seen in various MVs. At least one thing’s for certain, though: fans won’t confuse 100% with Teen Top. 100% is starting off with a much more mature concept for their debut in comparison to Teen Top, who took a little longer to delve into maturer concepts. The focus of the MV seems a little muddled; I’m not sure what purpose having the members run and drive around serves in the MV, but it isn’t a major problem because it helps to keep the MV from dragging by watching endless shots of the group dancing.

The aesthetics during the bulk of the MV remind me all of the MV for Infinite‘s “BTD” and give the same cool, militaristic vibe. I enjoyed the look of the MV, even as it switched from the other sets, although I really didn’t like the black and white set that reminded me of Cross Gene‘s “La-Di-Da-Di.” It felt too odd-looking and pegged onto the MV, but didn’t disrupt the flow of the MV completely. I thought that the grayscale shots coupled with the militaristic shots were sufficient enough for an MV. Didn’t anyone else love the beginning with the “100%?” It reminded me of a German car commercial, and I really liked how it flowed with the choreography at the beginning.

The choreography was great and showed that the boys clearly have talent in the dancing department. A lot of Teen Top’s choreography follows the same formula but it always makes me a little distracted, especially when it just feels random and out of place. The song itself is very catchy and doesn’t rely on autotune, which is always nice, and the boys have really strong vocals. The stylings of the song reminded me a lot of Infinite as well, seeing how they include ’80s synths in with a lot of their pop music. But similarities be damned, this is a very good song and makes me eagerly anticipate their next one.

I like them, I really do. Although their MV lacks originality, originality really is just a privilege in K-pop, right? “Bad Boy” is a good song and makes for a promising start to the group. I wonder what their fanclub name will be…10/10, maybe? 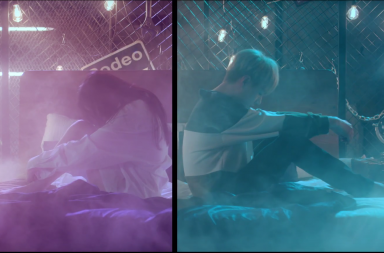