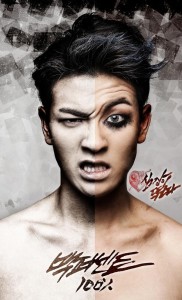 100% has carried a 2008-2010-ish boy band feel, since its debut, which has contrasted the image of their youthful label mates Teen Top. They tend to promote concepts that are masculine and sexy, with songs that stick to the dance-track formula, as opposed to noona-pandering cutesy pop. Their recent single “Beat” follows this trend. More akin to groups like B2ST and MBLAQ, it’s almost a shame that 100% didn’t debut a few years prior, as they may have experienced greater market success due to earlier K-pop trends. However, for those of us in the community who still look for that kind of dynamic in a boy group, 100% is a breath of fresh air.

A little unfortunately, the group lost two members recently, going from seven to five – or as some are saying, from 100% to 80%. Minwoo, the leader and oldest of the group, is serving his time in the military, while maknae Sanghoon is taking time off from the idol life to consider his future. Despite this, the other members are continuing on with promotions. The stage may feel a little empty to long-time Perfections, but Rockhyun, Jonghwan, Chanyong, Changbum, and Hyukjin are still around with something to show for..

“Beat” is a little different from 100%’s past singles in that it takes a darker turn concept-wise, however the intense tone of the song and the powerful choreography are what we’ve come to expect from the group. Now, before you throw your hands up and dismiss this as just another attempt at “goth” in K-pop, I suggest you give this particular MV a chance. While 100% doesn’t go straight for the throat with shock value like VIXX, they do manage to create a suitably dark and emotional story that is balanced with an authentic macabre feeling.

There’s a clear MV plot for “Beat,” but the storyline is left vague so that multiple interpretations can be read. However, if you put the little details together, there are aspects that seem indisputable. Essentially, it’s a Frankenstein concept that depicts the end of a relationship because of the death of a male counterpart. The girl is heartbroken and she sets out to revive him through homicidal means. The man awakes, but as per the original Frankenstein, being a monster is too much to take — he kills himself upon seeing her actions. This is expressed by him ripping out his own heart, upon seeing the dead bodies around him as he resurrects.

On first watch a lot of the scenes may seem haphazard, but upon further inspection they are actually intricately connected. The shots near the beginning of the MV, of the members running frantically, aren’t random; they show the boys trying to escape from the murderous and desperate girl. This is hinted at by showing adjacent scenes of her in the lab carrying the same armor the boys were wearing in the previous running shot. The armors are the “body parts” that have been collected to complete the resurrection of her dead boyfriend. 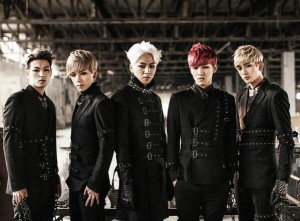 The same device is used further down, where shots of the past are shown and the girl is seen caressing certain parts of Chanyong’s body — she touches his shoulder or arm as he hugs her, for example. A corresponding shot then follows, showing that she attaches that specific part of the armor to her Frankenstein. It’s easy to miss the connection between all of these cuts in a single viewing; the MV projects a deceptive randomness that in fact leads to a rather deep story.

Moving on from the story, there is also an incredible amount of gorgeous costuming and choreography to enjoy in this MV. The black and white straightjacket inspired outfits are a good fit for the monster concept because they are both alternative and refined. The simplicity of these outfits allows for the use of the over-the-top armor gear in other parts of the MV — their edgy fashion choices do not appear overpowering. The armor shots are directly linked to the story but the straightjacket outfits are definitely the right picks for the longer choreography sections. 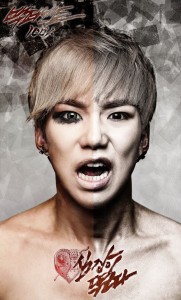 Speaking of choreography, the group made just the right adjustments based on their diminished number. There were moments of partner-dancing or solo-dancing that would’ve left too many members standing around had there still been a headcount of seven. The point choreography is a perfect match for the concept and drama of the song. The members throwing their bodies around in a circle embodies the out-of-control monster, and the heartbeat floor moves express both the heartbreak of the story and the heartbeat of the reborn Frankenstein. Thankfully the camera work is also on point in this music video, meaning the choreography is actually crisp and easy to watch, as opposed to being blurry or covered up with strobe lights.

There are nit-picky complaints about the MV, of course. The plot really could have been clearer; it does an injustice (to the MV/story) in the long run, as many people are probably not going to “get it” on the first watch. As for a complaint within the story, I’m still wondering why the girl didn’t get rid of the dead bodies before resurrecting Chanyong – poor planning on her part. And, of course, there is always one section an MV could have done without, and in this case it was the solo singing shots. These are minor complaints, however, and not enough to ruin the MV for the viewer.

Despite concerns about yet another K-pop group trying the “dark” concept, “Beat” was a pleasant surprise. 100% put their talents to good use with this single and if you enjoy this style of boy band music, the song quickly becomes addictive. Seven members or five members, 100% is still a group worth checking out. Overall rating: 4/5