AJ is gone, but life keeps going — yes, I know, I don’t want to believe it either. After the release of DoraDora last April and a special album for the fans in June, U-Kiss is back with a new EP, Stop Girl. It doesn’t exhibit a big change, neither musical-wise nor concept-wise — but luckily they don’t tend to rely too much in their concepts, instead staying more or less classy throughout their last releases (the feathery outfits in “Neverland” were super classy, ok?). If anything, Stop Girl is more a reassertion of their style without being quite the same as their last releases.

Stop Girl opens with “Imma New Thang”, probably the intro with the worst name ever, and aside from making me wonder why do they need to state they are doing something new every couple of albums (Bran New Kiss was kinda new, but this one not that much…), it is just a pretty average intro track.

The title track, “Stop Girl”, is a low tempo dance track with some R&B elements. U-Kiss handle the low tempo tracks pretty well and their voices really shine here — not in vain after the members changes they have three more than capable singers, and Kiseop doesn’t sound half-bad with the two lines he has. Their production ever since “0330” is definitely much better in the vocal aspect — nothing against Brave Brothers, but dropping him was probably the best decision their company has ever made. Slow-paced dance tracks are not my forte, but after listening to it a couple of time “Stop Girl” really grew on me, maybe also because it is somehow reminiscent to the Neverland style, feeling almost like a continuation to “Baby Don’t Cry”.

It also helps that they are killing it in their live performances; they have some of the best interactions with back-up dancers and group formations I have seen in K-pop, their choreographies are unusually smart and “Stop Girl” is no exception. And honestly, it is just what the song itself required.

“Time To Go” is a song that belongs to the “Neverland”/”Tick Tack” era — literally. They used it in the SBS Gayo Daejun medley last year, but it hadn’t been released until now. And honestly, it’s a pity; “Time To Go” is dark as “Tick Tack” just slower, and I’m loving the way the rap part is integrated between drums. Actually I’m really liking the rap part, which is a lot taking into account that it’s K-pop (and Eli and Dongho aren’t the best idol rappers out there, to be honest). And U-Kiss’s voices work so good together, it almost seems like they’re harmonizing. If that was a concept that existed in K-pop.

“Remember” is also not a new track; it was released at the beginning of the year for a drama and it features only members Kevin and Soohyun. “Remember” is a pretty average K-pop ballad, quite boring and cheesy, just like most drama OSTs, but Kevin‘s and Soohyun‘s voices sound really good together, complimenting each other perfectly. 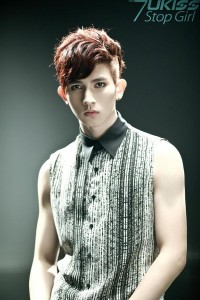 “Sexy Baby” is a bit the dead weight of the album. If “Remember” was boring but nonetheless being the only ballad in the album it somehow equilibrated the overall result, “Sexy Baby” is easily dispensable. It’s not awfully bad nor does it break the album’s continuity, but it’s just bland and generic and doesn’t contribute much to the album. The processing in their voices also does little in favor of them; one of their strong points as a group is how distinct their voices sound, so any sound effects that makes their voices sound even does not work for them.

DoraDora left me cold after the great album that was Neverland, which I can honestly say is one of my favorites K-pop albums ever and definitely one of the best ones from 2011. Stop Girl, both as a single and an album, is, shall we say, misplaced. Or maybe it’s DoraDora that was misplaced? Stop Girl seems to pick up where they left it in Neverland and explore a bit further the dark/elegant concept they started there and that should be their niche forever, actually.

I’m also quite surprised that Stop Girl even works well as an album, taking into account that it is basically made out of a couple of songs from different contexts and not intentionally written for the occasion, but that’s just probably because “Stop Girl” and his three versions and “Time To Go” make the majority of the album.