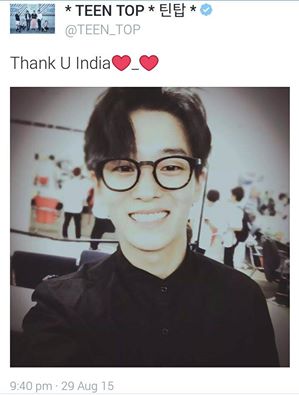 An ocean of blue lightsticks; harmonious cacophony of animalistic shrieks; streams of constant camera flashes; unending waves of unquenchable thirst; and a stage lineup of known idol bands – The Feel Korea concert on 29th August, 2015 in India was our first step towards actively taking part in K-pop fan culture in a more systematized fashion. Had anyone wished for a K-pop concert in India two years ago, I would have brushed them off dismissively and patronizingly as adorable fools; but now, with a signed ball from Bestie, a banner from ZE:A-J,  a signed CD from Teen Top, and a blue bruise received during the battle for signed balls, I think I’ll let the cynic rest for a while.

In a tie-up with K-pop Contest 2015, the Feel Korea concert is the first official K-pop concert in India after the country’s brief interaction with N-Sonic. The lineup included Almeng, Imfact, 100%, ZE:A-J (who were also the judges for the contest), Bestie and Teen Top. The buildup to the concert involved various events such as Makeup and Korean language classes with ZE:A-J, a fansign event with Teen Top, and the main K-pop contest itself.

When I reached Siri Fort auditorium, 15 minutes later than the scheduled time, I did not expect a massive crowd of people swarming like bees in the scorching heat. From Rajasthan, Bareilly and Mumbai to practically the whole of the northeast, people had flown in from various places of the country to take part in the concert. Apart from the lack of hard data on the number of K-pop fans, distance has always been a huge issue when it comes to K-pop concerts. Traveling from one state to another is not only a costly and time consuming affair, but it also requires an essay of minimum 2500 words in MLA format addressed to our parents as to why it is important for us to watch what most parents understand as glittery Korean men and women dancing onstage to noisy songs. But considering the mixed demographic getting their photos clicked at the ‘red carpet’, it seemed as if parents had conceded.

The organization thus far was wonderful. There were guards posted to guide you and the ticket counter was basically the first thing you encountered on entering the gates, reducing the chances of fans running around like headless chickens to a neat zero. Sure, there were a few lost souls searching for freebies – rumour had it that they were giving out SM/YG t-shirts – but overall, you didn’t have many wandering sheep. 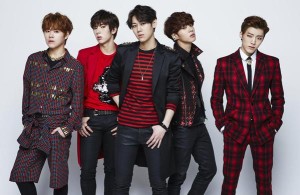 The emcee (and default translator) for the night was Kevin (ZE:A-J) and the show began with a joint performance by Star Empire’s rookie group, Imfact and the winner of the K-pop Contest 2015 — which took place on 27th August — Frozen, to GD and Taeyang’s “Good Boy” and Big Bang’s “Bang Bang Bang”. While the performance in itself was mediocre, the response to a Big Bang song wasn’t. People, including yours truly, were frothing with excitement because it was Big Bang playing in an auditorium, until then sacred to Hindustani classical recitals, instead of being ecstatic over an (somewhat) actual K-pop group performing before them.

This was followed up by K-pop duo, Almeng.  I’ll confess I had never heard of Almeng before the release of the lineup and only gave “Phone in Love” an obligatory listen but I was pleasantly surprised by their performance. They were the only ones who sang live and not a note was out of place. Despite facing an audience which clearly had no clue of their discography, Almeng took their relative lack of popularity in the right spirit and got everyone warmed up for the later performances. However, cultural differences and the dilemmas of language barrier started exhibiting themselves during their performance of “Half an Hour”.

We know K-pop has a tradition of letting fans complete the lines. If I sing the first line of the chorus, the fans will sing the second one. Almeng expected the same of us during “Half an Hour,” except we didn’t understand what Hae-yong was asking of us and we didn’t know the lyrics to the song, and most importantly, we don’t have a tradition of completing lines; we have a tradition of repeating it. I may be wrong here but as far as I know (and I am keeping “Disco Dancer” as my reference), the Indian audience is more familiar with a singer singing a line and then the audience repeating it in unison during an interactive session. This is not a hard-and-fast rule but that is what usually happens. So when Hae-young crooned “Half an hour”, we repeated just that instead of singing the next line leading to an awkward pause, shifty eyes, and nervous laughter. Almeng handled the hiccup professionally by joking about it; I, on the other hand, felt the first twitches of anxiety. 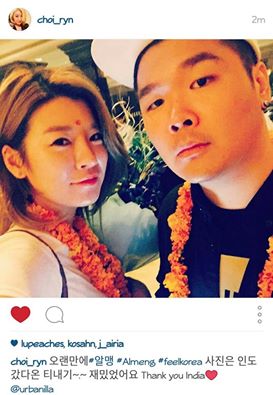 Borkung Hrangkhawl, a popular vocalist/rapper from Tripura, took over the stage after Almeng as part of a thoughtful act of local participation in the concert. He was later joined by Rose Vero who was a cultural appropriating mess with her blonde dreadlocks.

Imfact walked in after them and (un)fortunately, the performance which was the greatest crowd puller was their cover of GD’s “Crooked”. Their own songs “Make Me Smile” and “Casino” elicited lukewarm responses; although, the latter is quite a catchy song. The boys haven’t formally debuted yet and had it not been for the label they are under, I could have imagined a better future for them.

100% was next and boy, were they terrible. I snoozed through their whole performance. My sister deleted extra photos on her camera. My friend took around 500 selfies. I was very disappointed with their stage which started with the upbeat “U Beauty”. Somewhere along the line they performed “Bad Boy” and “Beat” but don’t take my word for it, I had completely switched off. The funny thing is, of course, that neither the songs nor the music video performances are sleep inducing. The problem was 100% and their undivided attention to their performance, so much so that they forgot they had a large audience before them for whom they could have spared an eye contact or two. It felt so robotic and lifeless that I couldn’t believe it was 100%, the “Want U Back” 100%, performing it. Their dismal performance was also accompanied by a dismal talk session where someone mumbled being excited about eating curry with their hands and yeah…

However, Bestie came to save 100%’s unimpressive butts with the best performance of the night. They performed “Pitapat”, “Thank U Very Much”, and “Excuse Me?” and were flawless throughout. You could feel they were enjoying their performances and that only made the crowd more excited. To add on to an already wonderful performance, there was fanservice galore. The fanboys awoke from their slumber and danced around. My heart practically melted and turned into a gooey mess because of their audience interaction. They were the only band who had put an effort into learning a few lines in Hindi: “Mujhe India bohot pasand hain” and “Main tumse bohot pyaar karta hun” were the iconic ones. 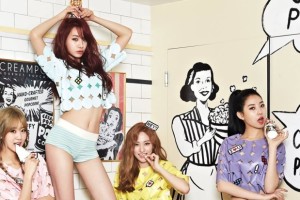 They were also the only ones who toured around Delhi a bit and instead of yelling curry at the top of their lungs, appreciated the scenery, which is a first for any tourist in India to be honest. Point is, they have earned themselves a die-hard fan.

Finesse became the subject of interest that evening when ZE:A-J took to the stage. ZE:A is not exactly known for its music and is mostly alive because of its actor members, Kwanghee, controversial leader and an MMA fighter so it’s not really my fault that I could only recognize “Breathe” from all the songs they performed. ZE:A-J’s strongest point, performance wise, was stage presence. Sure, they did their quota of fanservice but the fanservice was part of a larger attempt at getting the crowd involved in their performance. They knew that most of us were anticipating Teen Top and accordingly, made that extra attempt at garnering our attention. Dong-jun, despite being the maknae, led the cheer squad that was ZE:A-J.

Finally, the highlight of the concert graced the stage: Teen Top. I was really hoping a transcendental experience because excuse me, I was about to see Niel and L.Joe in flesh and blood at a minimal cost but nothing of that sort happened. I was so ridiculously calm throughout the whole evening that I felt disappointed with myself.

They performed “Ah-Ah”, “Rocking”, “Miss Right” and “Crazy” and as I have already mentioned, I was waiting to be overwhelmed; but the only adjective I could come up for their performance was ‘nice’. L. Joe, Ricky and to some extent, Changjo were driving the performance. Poor Ricky even tried to get us to sing along but he chose the wrong song – “Crazy”. All of us knew the lyrics to “Miss Right” but “Crazy” only had us screaming the chorus and you could see Ricky doubting our fandom culture in its entirety. Niel was mellow during the performance but got interactive during the closing stage, so he is forgiven; but you know who isn’t forgiven? C.A.P.

This guy made me want to drag him off to the wings because he didn’t deserve to be on stage. Lacklustre performance is one thing; being on stage only to move your fingers is another (preposterous) thing. This sun glass-wearing oddity didn’t want to perform, didn’t even hide the fact that he didn’t want to perform, barely moved his body during the dance routines, and found it extremely hilarious to have forgotten a whole section of the choreography. This is not about giving an impeccable performance; this is about not performing at all. 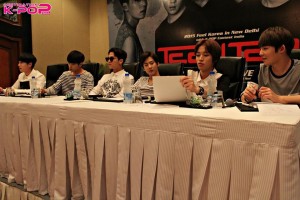 This dudebro also provoked the ire of fans during the fansign by being utterly apathetic. Again, I don’t expect him to ask about the well-being of my family but I do expect an acknowledgment of my goddamn presence and the important fact that this is our first concert, but said leader was too cool for us plebeians.

The night came to a close with a club-esque rendition of “Arirang” by all the invited artists. And then people fought over t-shirts and signed balls, and almost destroyed my fragile existence in the process.

And now for the good stuff. Not good meaning good but good meaning bad, y’know? Turns out the concert was not only the highlight in terms of the list of events but also in terms of organization and Feel Korea’s respectability towards Indian fans. Everything before and after it was utter chaos with a dollop of casual racist jibes, never ending threats, physical assault and plenty more. I don’t want to list every wrong done; the enormous number and the gravity of the wrongs done deserve an article of their own, but here is a porthole to that alternative universe of doom and despair. To put it succinctly, the Feel Korea authorities were utter racist and condescending assholes.

None of us expected the concert to be a replication of the many fancams we watch for vicarious pleasure, nor did we expect the same kind of intimate interaction we had with N-Sonic. In actuality, we went with zero expectations and were rewarded with a good enough evening. I mean, now I have the official rights to scoff at screaming hormonal fans and have received a wink from Kevin (Just don’t fight with me on this one) so, ultimately, I have little to complain about.