Five Decent Side Projects From KARA 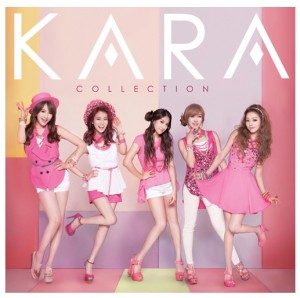 What happens when group members intend to do some solo material, but lack enough to pull off one whole album of their own? The answer to that is to have one song each, and then put together the results on one album.

That is what KARA have chosen to do for their latest release, titled KARA Collection. With a solo song to each member’s name, it probably serves as Universal Music Japan’s way of celebrating KARA’s Japanese successes, as well as selling yet another release to the faithful moneyed fans.

And as icing on the cake, there are five MVs, each of them tailored to the member’s solo. But do the resulting songs and music videos live up to their promises? Together with Jasper, I aim to find out.

Nicholas: The song is a piano and string composition, with some pitch variations in the tune to keep things interesting. Nearing the end, there is the usual belting, which helps to showcase her singing abilities. While Gyuri is not exactly the powerhouse vocal other girl groups may boast, she does acquit herself well in this slightly demanding track.

The music video definitely played up to the sad nature of the lyrics, which touched on a love lost and missed. In the video, Gyuri, looking rather ethereal, is shown shackled and running away from what is shown in flashback form to be a past love. Eventually, she does escape and finds another person, but the previous guy has left far deeper impressions than thought.

These parts are nicely illustrated by showing the same man in both a black suit and a white suit for alternating scenes, much like G-Dragon’s “That XX”. Besides the neat story, another nicely done part of the video were Gyuri’s outfits, which looked great.

Overall, the whole video was rather nicely done, and paired well with the song, making for a nice solo showcase.

http://www.dailymotion.com/video/xt8peu_mv-seungyeon-kara-guilty-jp-ver_music
Jasper: Can just I say how much I love this song? “Guilty” goes completely J-Rock, an insanely unexpected move for the more cutesy and aegyo-fied Seung-yeon, but how it does so much justice for her. Seung-yeon’s lower register, wonderfully lingering and full but rarely even shown in KARA’s regular material, is highlighted in the down-low and haunting verses, before a prechorus builds necessary tension for the very impactful chorus. Seung-yeon fittingly sounds intense throughout, especially in the chorus and middle eight, with her vocal potential evident and tapped into, and epic guitar riffs line the entire song, like icing on top of a amazingly epic cake.

The PV doesn’t have a plot unlike some of her fellow members, but that doesn’t keep it any less epic. The PV mainly shows Seung-yeon in mourning, at first in an abandoned house but later outside as well in a desolate setting, singing with her live band behind her. The video is simply gorgeous, a washed out filter filming the song and complementing the mood.  The props from the clock Seung-yeon tries to move, the chandelier she sits under, the old piano she finds outside, and the dove she releases are all just stunning, and so fitting symbolically with the video.

Seung-yeon looks absolutely wonderful as well. Her black outfits and red hair gave her an edge never really seen on her before, and her white dress looked jarring against her lonely backdrop, giving a sense of false innocence. Seung-yeon’s effort is probably the most different from the rest of the members, most of whom have clear plots and a lovely partner from a group of finely chosen men to keep them company. But dare I say it, but her effort was also my favorite of the five very high quality videos.

http://www.dailymotion.com/video/xt87gv_mv-nicole-kara-lost-feat-jinwoon-of-2am-jp-ver_music
Nicholas: With a simple guitar and slightly muted drums, this song is about as nice as pleasant listens get. Add to that how the song manages to flatter (but not overstress) Nicole’s vocals, and some decently laid back harmonisation with 2AM’s Jinwoon, and this song is probably a good example of how simple things, if done well, and very polished can be very impressive.

The music video sticks rather literally to the song, and largely centres on the theme of a woman who is alone without someone to love. Hence we get shots of Nicole looking morose sitting in a club, interspersed with scenes of her reminiscing about good times with her ex over activities such as driving, and how the good times eventually ended.

What was also likeable about the music video was how grounded at set in time the whole concept was, given how the story ended with Nicole just going home alone, which is probably reflective of how most of us get over lost loves.

Interestingly, there were some dance scenes edited into the music video. While they were okay, and probably played up Nicole’s strengths in KARA, they came across as slightly out of place in the song’s context.

http://www.dailymotion.com/video/xt6723_mv-hara-kara-secret-love-jp-ver_music
Nicholas: After what seems like some rather thematically downbeat tracks, it was nice to have something more cheery on the album. An up-tempo pop number with horns and light drumming in the background make for a very easy going listen. While Hara’s vocals have never been much to write about, it is good that this song makes very little demand of her abilities, so she does come across as wholly adequate for the song.

The music video probably plays up Hara’s nature a fair lot more, by showing her dating a guy at a fairground, with a doppelganger trying to ruin the day. Although the guy manages to get his girl in the end, doppelganger Hara manages to trick him into a little two-timing. Lest the music video starts entering B1A4 style infidelity encouraging, it turns out the whole thing was just Hara dreaming of herself in love with a guy on the fairground.

Packed to the gills with cute, and coupled with a pleasant tune, this is probably one of the more upbeat tracks off the album.

http://www.dailymotion.com/video/xt87pt_mv-jiyoung-kara-wanna-do-jp-ver_music
Jasper: Maknae Jiyoung’s “Wanna Do” consists of nostalgic acoustics embellished a little for a J-Rock/J-pop fusion very reminiscent of fellow “K-princess in Japan” Younha’s earlier work. The very nostalgic and chill song was a move I did not expect from the upbeat Jiyoung, but it works wonderfully on her delicate and dreamy voice, which managed to be highlighted especially toward the end. She hits notes I didn’t expect to be in her range, and her emotional execution deserves praise, sounding perfectly reminiscent yet passive in the quieter moments but potently desperate in the climax.

Jiyoung’s PV is also probably one of the more plot-driven ones out of the girls, alongside Nicole’s. The video starts with Jiyoung reminiscing about the past, writing the song. A flashback soon ensues, taking us to the main part of the plot, with Jiyoung searching for a guitar. Right when she finds the perfect guitar for her, a stranger, our male lead of course, takes the guitar, leading Jiyoung to follow him for said guitar and our two leads meeting up. A cute love story then ensues with our couple being ridiculously cute with each other as they possibly can. However, trouble brews as our male lead starts going blind, something that’s been hinted before in the video, and he eventually leaves Jiyoung after a night together because of his blindness, leaving the guitar that caused the two to meet with her. Of course Jiyoung reacts as you would expect, and we flashback to the two on a previous date, the contents of the male lead’s goodbye letter being read aloud.

The PV of the song has vibes of Juniel’s earlier “illa illa,” who also has her fair share of Japanese influences, with its innocent yet tragic love story lined with disabilities and cool and refreshing visuals. The video is seen under a cool and relaxed filter — most evident in Jiyoung’s solo scenes happening after the plot, but the visuals manage to be warm at the same time, especially towards the love-smitten flashbacks. The plot was for the most part, nicely done, greatly paced and fitting with the song. Jiyoung’s acting did seem a bit exaggerated at points, but it was overall, an amazing effort, the two leads selling the love story well and Jiyoung executing the song amazingly.

To conclude, if all we could do was pick between good and better PVs, then this project must have been a positive thing for KARA. The solo projects provided a few other different sides to KARA, as well as managing to highlight their individual flair, while managing to downplay their weakness, with each song seemingly tailored for them. Jasper also said that this project did play up a more mature side to KARA, one which they could pull off.

Having said that, Jasper and I each had our own favourites. Mine was Gyuri’s Daydream, for a multitude of reasons (the plot which left the story open to interpretation, Gyuri looking very much awesome, the song being a nice listen, and the whole thing being rather nicely done).

On the other hand Jasper preferred Seung-yeon’s “Guilty” for the surprising amount of sheer epicness Seung-yeon was able to embody and how her abilities were finally being tested.

Overall, this project was a nice diversion from KARA’s work as a group, and for fans of them, worthy of their attention. This concept is also worthy of following by other groups, especially to give every member in any group something to shout (or sing) about. Another nice effect of this was how the project did well to counter criticisms of them as weaker performers compared to other girl group members.

Finally, as Jasper mentioned, the project still retains hints of those quintessentially Japanese influences, showing how seriously Kara handles Japan, and how it influenced their sound for the better.

For all of these reasons, this project gets a 4.3/5 from the both of us, being a worthy listen for both fans and non-fans alike.