I won’t deny that I have a penchant for loving and buying cute things, Rilakkuma, Hello Kitty, , and Totoro & Co. are my drugs of choice, but I’ve never been one to 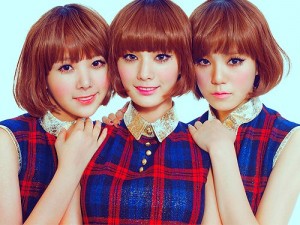 understand the intrigue of being into an musical scene based on Lolita lite, filled with grown women parading around in short skirts and bows that would give Minnie Mouse a run for her money.

Hence why I haven’t been inclined to follow Orange Caramel, but I do find that some of their songs are shamelessly catchy and are pretty darn good, even if the MVs make me gag from their sugariness. It’s like they reserve all the exaggeration and over-the-top aegyo for their concepts rather than their singing and songs. But seeing as their Japanese debut song-which was long overdue by the way–was going to be a cover of a 1970’s song by the Candies, a very popular Japanese girl group back in their day, I decided to check the original out before I watched the cover. 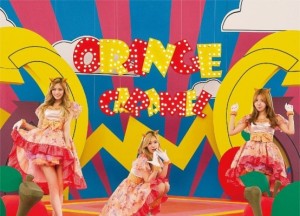 The original isn’t an earth-shattering song, it’s a little bit too slow for my liking to be honest, but it has a smooth instrumental with the mix of electric guitar and kinda of feels like disco meets cabaret.  The Candies’ voices sound really plain and unimpressive during this song, but I’ll admit I had the hook “my sweet little devil” stuck in my head for a while after watching the video. Seeing as Orange Caramel don’t have the strongest of vocals, although I really like Lizzy‘s tone, I think this cover could be a good starter song for Orange Caramel. I don’t think it’ll give them an impressive debut in terms of commercial success based on the cover alone, but the name recognition of the Candies might help them out. I really wish K-pop artists would try to stick with original material rather than opting for covers and remakes of their Korean hits. But then again, at least this staves off any more cultural appropriation pop from Orange Caramel for a little while longer.

The PV itself seems really poorly done, especially for an Orange Caramel MV.  The simplicity in what usually occurs in Orange Caramel MVs is still there, but it feels like they used the scenery of a Dr. Seuss book as inspiration, a book that was filled to the brim with pink and orange. Not colours I would attribute with a devil, but at least they got some tails. But it seems like they basically threw out the devil part in the song, and stuck with the sweet and little part and ran with it. 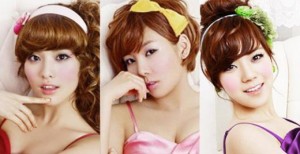 The floral print dresses aren’t exactly great either, the colours are nice, but the whole cut and length of the dresses, especially with the skirts, look a little off and the dark pink ruffles are kind of hideous. I liked the girls’ hair, even though I really wished they could give up the matching hair schtick, but at least each shade of blonde was a nice fit for everyone. The kaleidoscope of fruits and peaches were odd and reminded me of an old Fruitopia commercial. The cameramen, all foreigners as expected, were annoying with their over-exaggeration and kind of made the whole MV seem like a peep show without the stripping. As for the singing, the light vocals of Lizzy, Raina and Nana carry it decently, on a singing level, and their pronunciation isn’t half-bad.  For the cover, they picked up the tempo of the instrumental and made it a lot more saccharine than the original, to fit with Orange Caramel’s style, but it still kept its ’70s heritage and it actually sounded a little better than the original in my opinion.

Hopefully, Orange Caramel, Pledis, and Avex will come out with a better Japanese effort, especially with the competition in the Japanese market. While Orange Caramel may be an anomaly in the Korean market, with the overtly sugar pop, Japan already has its own special niche market for this type of music and concept, so we’ll see if Orange Caramel will translate well with that competitive market. I’m just baffled at how long Orange Caramel has managed to stay relevant, despite being just a sub-unit. I wish them the best of luck in Japan and pray to the K-pop gods that they don’t come out with a single called “Tokyo Paradise” come September.