Getting One’s Head Wrapped Around SKARF 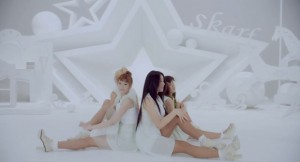 If there’s one thing that can be guaranteed annually in K-pop, it is the quantity of debuts every year. Without fail, nugus make their appearances with some fanfare, a unique selling point (or gimmick) and then spend most of their careers trying to mix it with the big boys with varying degrees of success.

With a unique selling point of Singaporean members (after all Singapore is more known for “consuming” K-pop, rather than exporting it), and promising a sound that moves away from the slightly tired electronic pop/ retro funk, the latest entrant to this field is Alpha Entertainment’s SKARF, which takes the word “scarf” and replaces the C with a K for Korea.

Armed with the usual teasers, and having a variety show to document their off stage life, they certainly have generated a fair amount of fanfare. So putting aside patriotic jingoism (the writer being Singaporean) and the thorny question of whether every possible niche in girl groups has been filled, its time to give their first single “Oh! Dance” a listen.

The song plays it very safe structurally, following the usual patterns of verses, leading into the chorus, repeating the process again, and then a rap-dance break, before turning up the tempo again, and then ending. While the verses were rather pleasant and inoffensive to listen to, thanks to Alpha laying off the autotune, they did not come across as particularly memorable. 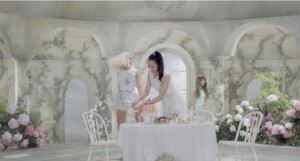 Memorable however, would be a perfect term to describe the chorus, if only because it is a hook made up largely of repeating the song title. While it works, it definitely is one of the cheapest ways to make any song memorable, and does come across as annoying after a while. Then again, not many songs break away from this trick, so it’s not worth penalising them for it.

The rap and dance break though was pretty average, with some added beats and what sounded more like talk-singing to break the flow of the song. Vocally, the singing could definitely be called average, with some members sounding slightly flat (although that could also be blamed on the production), though admittedly, the song also was not exactly a showcase of vocal ability, without too much of demanding belting or vocal techniques.

If there was one thing about the song in terms of song structure and lyrical content, it would be how much it has in common with A-Pink’s “My My”, which to some extent took a bit from the “Kissing You” rule book. This would be something to address in the conclusion.

The video to be honest, had very little worthy of a plot, unless preparing and having a tea party of sorts could be counted as one. Of 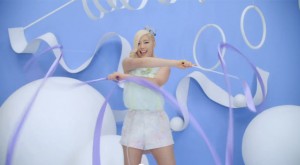 more worthy mention would be the theme, which was probably centred around all things feminine, and included a little nod to rhythmic gymnastics.

Still, it could be argued that the theme was well executed, in line with the “pure and innocent look” expected of the concept. The use of white, and other light tones on the set did help to create the appropriate feel, while the props used certainly added to it. Another nice touch was the bubble surrounding them that burst, which hinted at their new and fresh look for the music video.

Keeping with the whole pure and innocent feel, the dance laid off the overly sexy moves, and was choreographed largely around simple hand and leg waves, with a few cutesy moves to suit the lyrics. However, nearing the end of the song there was a little body wave à la SISTAR, possibly to hint at a future sexy concept or to add a little to the music video. Still, it came across as a slightly odd addition, and what made it weirder was how the dance move appeared to be cut or edited out halfway.

To sum up, as far as debuts go, this has got to be one of the safest and most inoffensive ones this year. The song is pleasantly 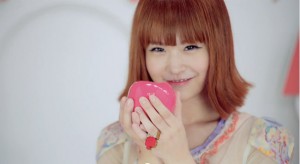 listenable, the music video does not attempt to redefine weird, and the dance moves, perfectly watchable.

On the flip side, one also wonders why would Alpha Entertainment debut with what could possibly be the most average concept of the year, consisting of very little risk taking. In an age where girl groups seemingly try to out-do each other, be it in terms of looks, vocal talent, or trying to create the “sound of tomorrow”, the irony is that a girl group is debuting by being just near best practice in almost every way.

Granted, playing safe might be a gamble that would pay off. After all, the public might appreciate a song that goes back to slightly older times in K-pop, but one really has to wonder if every possible niche in girl group K-pop has been exhausted to have to go with something that generic.

The rating for this reasonably executed, but creatively starved debut would be 2.8/5. Still, the fact that it was not exactly a mess, means their sophomore release would be worth watching, if for seeing how things would go from there.

So Seoulmates, what is your take on this  new Korean-Singaporean girl group?