MAP6 Debuts With The Dark "Storm" 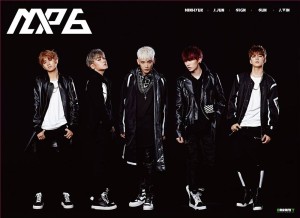 Sometimes it feels like there’s a new boy group debuting every week in the world of K-pop and MAP6 is the latest. As the brother group to Girls’ Day, MAP6 is Dream Tea Entertainment’s newest boy group. Their debut video is “Storm,” set in an apocalyptic world where there’s little hope from the remnants of their former life.

In keeping with K-pop’s theme of rarely ever having the same amount of members as your name, MAP6 is composed of five members. With the exception of Sign, Minhyuk, J.Jun, Sun, and J.Vin were previously in A-Prince, a disbanded group from New Planet Entertainment, so to call MAP6 rookies is misleading. Maybe because of the members’ previous experience, MAP6’s debut video is darker and stronger than I expected.

Their concept isn’t exactly original; they’re a hiphop focused group with cool choreography that emphasizes the members working together to create a strong visual presence on stage. It works well with the overall atmosphere of “Storm” — the piano melody combined with Sun’s sweet, expressive voice is a nice contrast to the throaty rapping from Minhyuk and Sign.

The video itself has the dark, ominous aesthetic that’s so popular in MVs these days. While it’s not an entirely original look, it fits well with the song’s lyrics and general theme. Everything has a fine layer of dust and the ground has sand on it, making the choreography look even cooler than it already does.

While there isn’t an actual plot to the video, 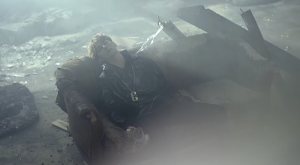 there is a basic story arc. Each member is seen looking morose and hopeless in their surroundings; occasionally they’ll pick up a necklace or hourglass to examine it and remember what used to be. As the video progresses they become more distressed; they destroy their surroundings and act out. At the end we see Sun put on a gas mask and apparently falls asleep.

They’re a bit more morbid than you’d expect for a debut MV, but the visuals reflect the desperation that’s present in the lyrics.“Storm” is solidly a break up song reflecting their feelings about how the pain and heartbreak has left them in chaos. During the first part of the song, J.Vin raps,

My tears could fill up the ocean

The sorrow only gets more cruel

While it’s a bit melodramatic, it certainly makes the point that the end of the relationship has left them in a state of misery. The chorus continues in this vein, with the members lamenting why such a tragedy would happen to them and saying that they can’t breathe without their former lover.

Lyrically, the song is simple and nothing original. I enjoy the extended metaphor about how the break up is a storm that they’re swept up in, but unfortunately the execution feels a bit amateur. The repetition in the lyrics feels tired by the end of the song. Plus, many of the descriptions of their pain are a bit cheesy and over dramatic.

The song itself is a solid song and the choreography showcases the time and effort they clearly put into training. If like their pre-debut performances suggest, the rappers in the group are also solid singers, leading to more possibilities musically down the line. I’m not a fan of having so many members act as rappers; they’re clearly not going to continue focusing on a hiphop concept, so why not show off the voices of the other members?

MAP6’s debut is a powerful first MV that makes a statement about the talent the group clearly has. There’s some room for improvement; but really, what debut doesn’t? It will be interesting to see where MAP6 goes from here and if, unlike A-Prince, they’ll succeed and make it big.