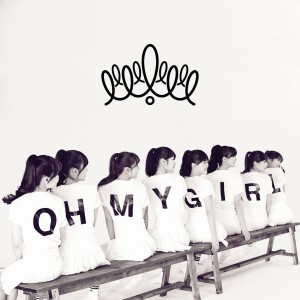 The newest girl group to debut this Spring, Oh My Girl, has followed in the footsteps of many new groups by pursing the cute concept in its debut track “Cupid”. The group is made up of 8 members, with each boasting talent and good looks. However, will this debut stand out from the rest?

Coming from the company WM Entertainment, that bought us the quirky and fun B1A4, Oh My Girl seems to have taken a similar debut route by pursing a cute but funny concept. They even rehash a similar colourful street set that has been seen in many of B1A4’s MV’s. This doesn’t mean that Oh My Girl is just a female version of B1A4, even if they have been presented as a sister group. While B1A4 was more quirky cute, Oh My Girl seems to have gone the more traditional route by basing its cute concept on innocence.

If the title of “Cupid” didn’t give it away, this song is about love; the new and wondrous kind of love. The song revels in the anticipation and excitement when one starts to pursue someone romantically.

Show me your face in love (Show me)

The girls have a confidence in the way they carry this song that doesn’t feel like it’s coming from rookies. The way love is portrayed in the song and MV is also full of bright confidence; It feels like the stuff of hope and dreams, displaying romance as something completely wonderful that should be embraced positively. However, they do make it believable and a lot of fun to watch, especially when the girls get up to all sorts of mischief in this MV with their roles as the “Cupids” of their community. 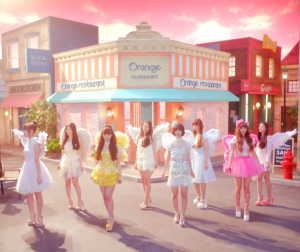 When the girls take on the role of cupid in the MV, they endeavor to fix and create new romances. There is the couple that is fighting, the cafe worker ignoring a customer, and a few random strangers, that all feel the effect of these girls ‘meddling’. Their meddling is presented as completely positive, as they start to put smiles on peoples’ faces by starting and fixing relationships. This plot is incredibly enjoyable to watch, embodying the message of the lyrics completely. Though, the girls are not completely true to their roles as cupids, as they are not the traditional naked babies with wings that shoot love arrows from classical mythology. However, they do reinvent the role well, wearing costumes with wings and using the power of blowing kisses instead of arrows to make people fall in love.

There are lots of places to look in this MV, between the colourful sets and costumes, it’s sort of a competition for what to focus on. The use of pastels and bright colours creates a cheerful and innocent feel in the MV. This video wouldn’t be the same if it was full of dark colours; for this concept bright colours are a must. The dancing set seems heavily reminiscent of BAP‘s “Warrior” with the gigantic bunny rabbit in the background. Maybe this is becoming a trend?

The song itself is a marching band inspired mash-up of different melodies. Like many other K-pop songs this release uses a hybrid combination of distinctive melodies, each which seem like they could be their own song. The song has three distinctive themes to it, the tentative first verses that are filled up with ‘Doo Wop’ inspired lines, the collectively sung build up and the cheer like chorus. 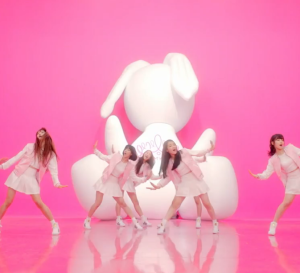 Each part of the song is used to build up, or increase, the pace to make it the light-hearted upbeat piece it is. Though each part is very different, the contrast doesn’t seem too jarring as other hybrid songs have been.

I am seriously loving the amount of saxophone being used in pop music in recent years; this release utilizes it in the form of a –- dare I say this at this risk of sounding severely out of date with my language — groovy sax line to offset the ‘Doo Wop’ inspired lines. You’ll never get bored with this song because the elements are constantly changing to draw in your attention, giving you something thoroughly enjoyable to listen to.

The talent displayed from this group is strong, though the group seems to shine brightest when they sing together. I have always thought that the collective voice of a group is a very important and appealing feature. It allows groups to create their own identity as a whole, allowing the listener to tell who the group is from that particular point in a song. This is something that most of SM Entertainment’s groups utilize incredibly well. The point in “Cupid” where the collective voice of the group is strongest is in the build up to the cheer-like chorus. While slightly similar to a few groups out there, Oh My Girl is well on its way to developing its own voice.

Overall, this is a enjoyable first release from Oh My Girl, with the girls fitting into their “Cupid” concept seamlessly. This isn’t really an original concept, however it is definitely a strong start for this group. Hopefully, it’ll be enough to draw attention to them.

So, did you get struck by the groups kisses and fall in love with Oh My Girl?